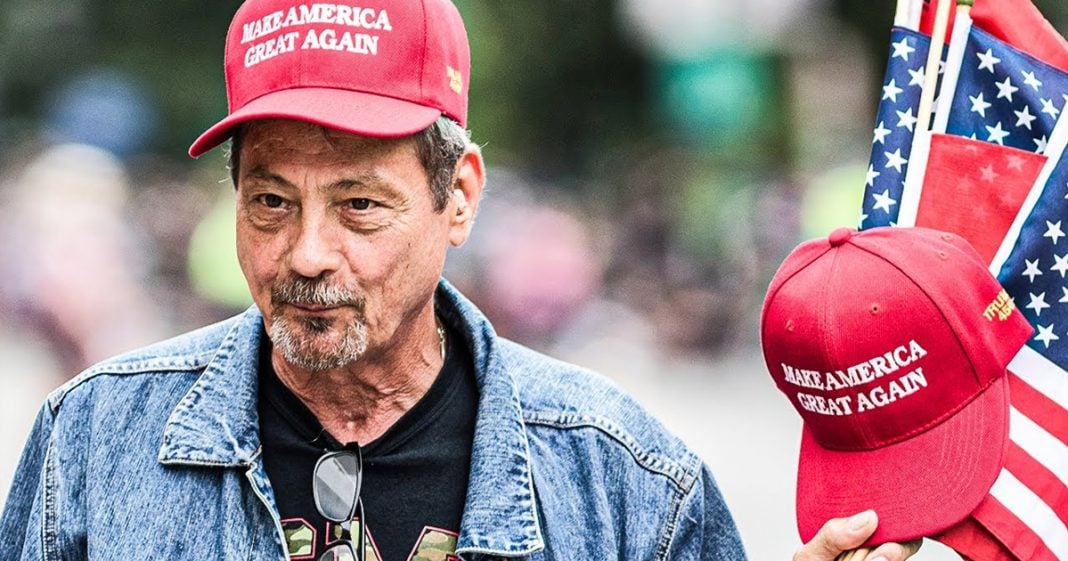 According to a new poll, more than 40% of Republicans believe that Bill Gates wants to work on a vaccine for Covid 19 so that he can implant people with microchips. This is what Fox News and conspiracy theory radio does to your brain. These Republicans have left the land of reality behind, and they are now in need of serious help, as Ring of Fire’s Farron Cousins explains.

According to a new poll conducted by YouGov for Yahoo news, more than 40% of Republicans are drop dead stupid. Now, that’s not exactly what the poll is telling us, but that is what the poll’s actually telling us because according to this new poll, more than 40% of Republicans who say that their primary, primary source of news is Fox news believe that Bill Gates’ motivation for trying to develop a vaccine for Covid 19 is because he wants to implant microchips in billions of people across the planet so that he can then… track them? Control them? We don’t quite know yet, I guess, what Bill Gates true motivation is here with the microchips. We just know that microchipping them is step one. We will get to step two later as far as this conspiracy theory goes. If they ever develop a step two because, you know, being implanted with a microchip is bad enough.

We don’t need to know what they’re going to do with it. Folks, this is terrifying news. 44% of Republicans polled who say they get their news from Fox news say that they believe Bill Gates wants to microchip everyone. That’s why he’s trying to come up with this vaccine. I have to read this paragraph. This is absolutely bonkers. This is from CNET. It says the representative survey of 1,640 US adults by YouGov for Yahoo news found that half of respondent Americans who say Fox news is their primary television news source, believe the conspiracy theory. It’s the largest group responding to this way, followed by self-described Republicans and voted for Donald Trump in 2016. 44% of both those groups said they believed the conspiracy theory was true. 26% of respondent Republicans said it was false and 31% said they weren’t sure. So 31% of Republicans in the poll were asked like, hey, do you think that Bill Gates is trying to microchip billions of people through a Covid 19 vaccine?

I don’t know. They, they literally weren’t sure, like they didn’t know one way or the other. So only a quarter, a little one point over a quarter, 26% of Republicans said, no, no, that’s not true. Literally the rest of them either said, yes, it is true or I dunno. Folks, this is the kind of Republican party we’re dealing with today. But this is what happens when your primary source of news is either Fox, which is totally fake or conspiracy theory, right wing radio. You know, we like to think that Alex Jones and Glenn Beck are the only crazy ones out there pushing absolutely absurd conspiracy theories, but they’re getting it all over from conservative media. You know, Rush Limbaugh is out there saying things that are false and fake and Ann Coulter is, and Michelle Malkin is, and all of these folks that a lot of us like to forget even exist. They’re out there every single day pushing fake stories, some more outrageous than others.

Like when they claim that, and this wasn’t necessarily limited to the United States, but when we heard the claim that the 5G towers were helping spread coronavirus and that led to attacks, attacks in the UK on 83 5G towers. These people will believe anything and unfortunately as this poll proves, they will believe the craziest of the crazy conspiracy theories to the point where we have almost half of Republicans saying, yeah, that’s true. Bill Gates wants to microchip me for whatever reason. Unfortunately, we don’t know. Maybe we won’t know until the microchips get implanted, but I guess we’re just going to have to wait and see, or at least that’s what Republicans think we have to do. The question I have, and I do not have an answer for this, but it’s how do you fight this level of crazy, right? How do you convince these people, not just that they’re wrong about this, but that they’re wrong about other things? I, I’m afraid that the answer is you can’t. These folks are too far gone. If you’re at the point where you believe that a software CEO wants to put a microchip in you through a vaccine for a disease, then I’m afraid there’s nothing I can do to help you except give you the name of the nearest mental health facility.