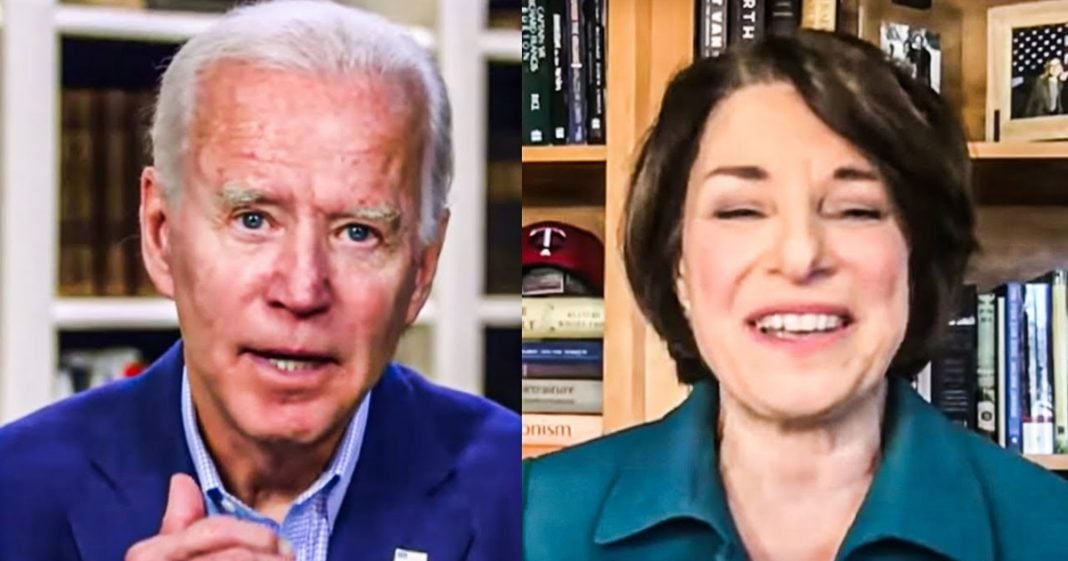 Joe Biden was doing fine with voters of color up until last week when his comments about “you ain’t black” and his campaign telling Amy Klobuchar to prepare for vetting were made public. Black and Latino activists are now warning Biden that if he picks Klobuchar, he is going to fracture that vital part of the Democratic base and absolutely lose the election. Ring of Fire’s Farron Cousins explains why Biden needs to listen, but so does the entire Democratic establishment.

You know, in the early days of this democratic presidential primary, we were told ad nauseam by, you know, the people much smarter than us, that Joe Biden was the safe pick to get the minority vote. Right. He resonated the best with African American voters, other voters of color throughout the United States and that’s what was going to propel Joe Biden to the nomination. And let’s be honest, I mean, yeah, absolutely. After that victory in South Carolina, things did in fact turn around for Joe Biden. But that has less to do with who and what Joe Biden is and more to do with the bandwagon effect. Because as we have seen just in the last week, Joe Biden’s having a really tough time with voters of color. Not just with his statements heading into the weekend of you ain’t black, which after just a few hours, Donald Trump’s team already had an ad made up and t-shirts for sale that said, you ain’t black, Joe Biden.

Like they did a really, really good job. You got to give them credit for that. They jumped on it just phenomenally. But even before that, Joe Biden was having some other problems with voters of color, and that is when his campaign told Amy Klobuchar to get ready to be vetted as a possible vice presidential pick. Now, this was not surprising. Everybody knew that, you know, Klobuchar was going to at least be vetted. She was in the running for it. But voters of color, according to a new report by Politico, this includes both African American activists, strategists and voters and Hispanic activists, activists and voters are warning Joe Biden that if you pick Amy Klobuchar as your VP, you’re going to lose not just the election, but you are going to lose one of the strongest voting blocks of the demo, Democratic base.

Voters of color are issuing that warning right now to Joe Biden and his campaign. They’re saying, we do not like Amy Klobuchar. We made that clear during the primary. We do not trust Amy Klobuchar. We do not like her record as a prosecutor in Minnesota. We do not trust her. We have seen what she does to our communities and we absolutely will not support a ticket that she is a part of. That is a very strong message coming from these groups to Joe Biden and I hope Joe Biden is taking note of this, but I also hope that the democratic establishment as a whole is taking note of this. For far too long the establishment has taken voters of color for granted. You know, we always hear like, oh, it’s the black who got the Democrats here. It’s the black ones who got them there, you know, oh they’re, they’re the best. We wouldn’t be here if it weren’t for them, but y’all do nothing, nothing for those communities. They have been one of the most loyal voting blocks for the Democratic party, at least in my lifetime. And during that same time, what have you done for them? What have you given them?

What are you offering them now? The answer is nothing. You’re offering them a candidate who smeared an African American woman in order to get a conservative placed on the US Supreme Court. A presidential candidate who helped and championed the crime bill. Was against busing. Now he wants to pick a woman who has a horrid history of prosecuting young black men in Minnesota and locking them away for decades for minor crimes. Wow. Wow. And these are the same people who said, Bernie Sanders has a problem with black voters. No, it’s the Democratic party in general that has a problem with black voters. Not getting them to vote for you, but giving them a reason to vote for you and they’re starting to get pissed. Just like the rest of us. They’re starting to look at themselves and wonder why. Why are we doing this? Why, why are we still falling into this same trap? Why are we with you again? What are you giving us in return? That’s a question of a lot of people are answering or asking, and it’s up to Biden and his campaign to finally come up with some answers for them.