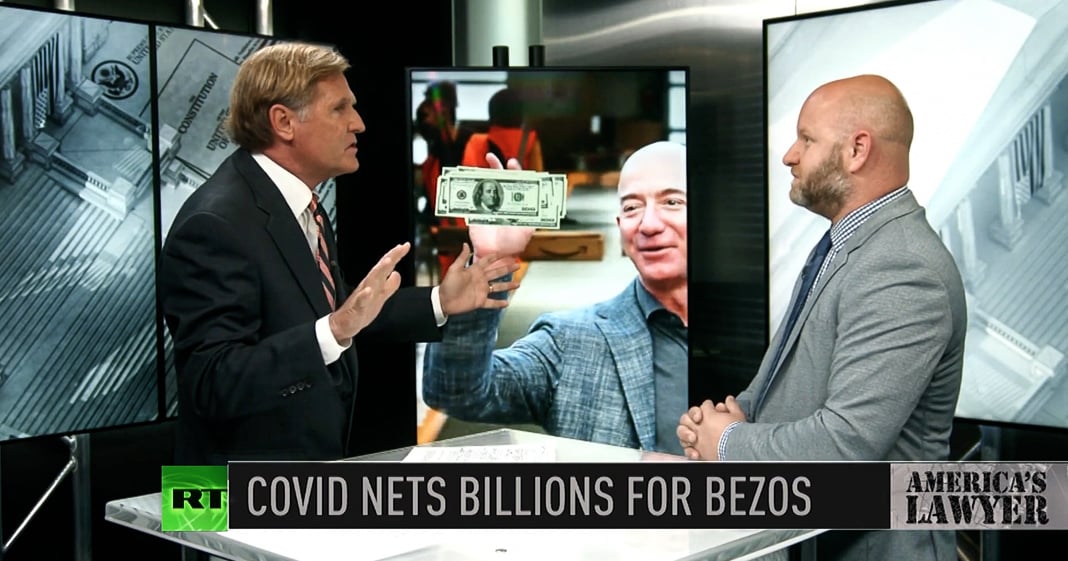 Mike Papantonio: Jeff Bezos has made $30 billion during the coronavirus pandemic. But that’s not gonna stop him from cutting two extra dollars off workers. Farron, this is the most outrageous story. Go, lay it out.

Farron Cousins: And they were getting an extra two bucks an hour and I think extra overtime if they were working overtime during this pandemic because they’re in essential service. People are relying on them now more than ever because they can’t leave their homes. They need the stuff and Bezos did a good thing. He said, all right, here’s two bucks an hour, here’s your extra overtime. And during that same time, man makes 30 billion and he gets all this money and he says, I probably could make a lot more if I wasn’t giving you this hazard pay and this overtime pay. So he came out last week, the end of last week, and said June 1st you’re losing your two bucks an hour. You’re losing your overtime. I need, I guess I need more money because 30 billion isn’t enough.

Mike Papantonio: Yeah, 30 billion dollars he made on the backs of these workers, who risks their health. They risk the health of their family already working in an environment that is totally dysfunctional. All the, look, Bezos regards these people as disposable units. That’s how he regards them. Bezos thinks of his workers as something just a cut above robots. Okay. So all of a sudden we see this freak start saying to everybody, well, you know, we’re going to give you some extra hazard pay because you’re coming in here, you’re putting yourself at risk, you’re putting your family at risk. He makes $30 billion and then says, oh well I got to cut that $2 an hour. I was giving you. I got to cut that now. What, what’s happened to capitalism in this country? I mean, really what in the hell has happened to capitalism in this country? We used to think Microsoft and Facebook and Tweet, you know, all these, all these org, digital organizations were going to change capitalism. Have they done that?

Farron Cousins: Oh, absolutely not. But we as a country, we’re so desperate for somebody to emerge as a leader, a hero figure. And at first you know, oh, maybe it’s going to be Bill Gates. But maybe not so much. Oh, it was Mark Zuckerberg. No, not him. He’s spying on you. Okay. What about Bezos? Amazon. That’s great. No, he’s treating his workers, you know, worse than wild animals. They’re having to pee in bottles.

Mike Papantonio: It came out and then Amazon tried to discredit the story. Workers couldn’t take the time to use a restroom facility. They were peeing in bottles. Workers for this guy were putting their life at risk by going in there every day and potentially taking the virus home and giving it to their, their spouses and their children. And he thinks $2 an extra hour. I only made $30 billion. What in the world is going on with mentality of, of these modern digital capitalists?

Farron Cousins: They may have started off, you know, as idealists, and I’m going to change the world for the better. But as soon as they started getting those checks, as soon as their bank accounts started going crazy with more money than they could ever spend in a thousand lifetimes, it changed them. It absolutely corrupted every single one of these individuals. Elon Musk is a great example too. You know, he is out there saying, even though I’m not allowed to, I’m going to reopen. I’m going to force my workers to go back. Oh well, whatever happens to them. He thinks he’s a modern day Rosa Parks by ignoring these orders.

Mike Papantonio: Farron Cousins, thank you for joining me. Okay.