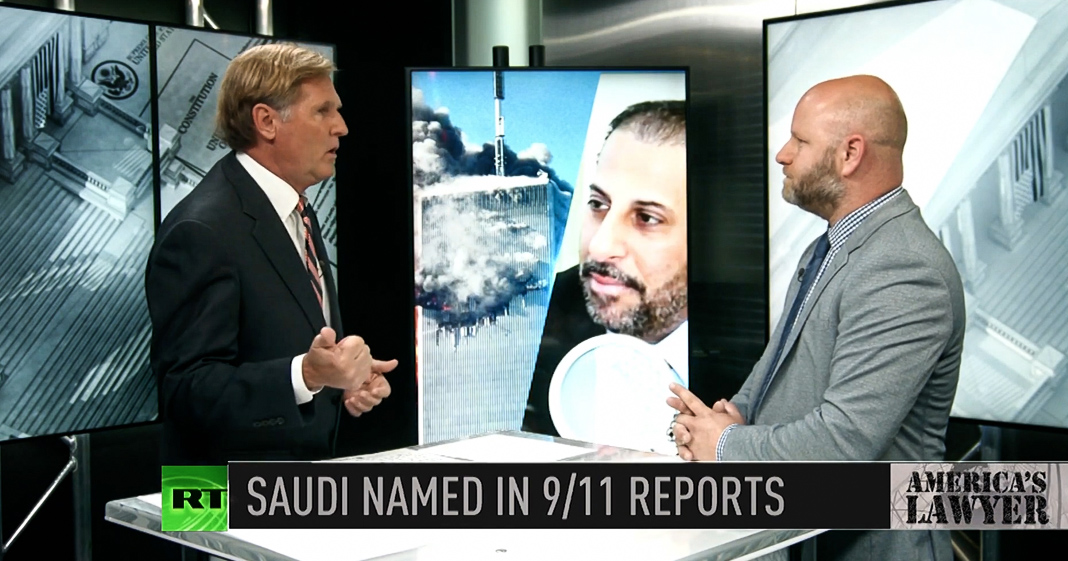 Mike Papantonio: The FBI has accidentally released important information about Saudi Arabia’s role in the 9/11 attacks. Information that the government has tried to keep hidden. Now, okay, we know this, the the, we know the Royal family, this all the track goes right to the Royal family. They knew what was taking place. They actually engineered bank accounts. They engineered places for people to live for the, for the Saudi Arabian terrorist’s where they could live. They had, they’re all, this has their fingerprint all over it. The FBI tried to hide this from the families of the 3000 people who were murdered. All these people want to do is be compensated for the murder of their mother or their father or their child. They want to be compensated and the FBI has hidden the fact that you have the Royal family directly involved in 9/11. Take it from there.

Mike Papantonio: Is that an overstatement, by the way?

Farron Cousins: Absolutely not. I mean, 19 years the FBI has known that there was a link between Al Qaeda, the terrorists who pulled off 9/11 and the Saudi Royal family. And that link is a person by the name of, Mussaed Ahmed al-Jarrah.

Farron Cousins: And that person was an official here in the United States and what this new lawsuit, the FBI accidentally unveiled in these court documents, excuse me, is that he was the go between. He was the go between, between the hijackers and Prince Bandar who everybody remembers from the photographs with George W. Bush walking around hand in hand. That was the guy and the intermediary would talk to Bandar. He would then go talk to the hijackers. There is no more question. The link has now been established.

Mike Papantonio: And the FBI is scrambling to try to say, well this is state secrets, we can’t tell. The only reason it’s state secrets is because these, these thugs, this Royal family bunch of thugs sells us oil and they buy our weapons. That’s the only reason that this is secret. We have 3000 deaths, the biggest murder in America and they’re hiding this guy. You remember right after 9/11, how they secretly snuck everybody out?

Mike Papantonio: All the Saudis out of the country.

Farron Cousins: Yeah. This is part of that. And so this is the kind of unmasking that the FBI says, oops, we didn’t mean to, to release this, and this is, this is historically changing what we know about 9/11 at this point. But then, you know, we have to lead from this into the other unmasking story, don’t we? Because that’s big news too. And what we’re finding out there is that sometimes the FBI releases information, not accidentally, but intentionally. And so it’s an organization that has no trust, no integrity whatsoever.

Mike Papantonio: Why, why are progressive’s not reacting to the fact that on the Comey, Brennan, Clapper story. Let’s assume, let’s assume that Flynn did something. He had a bad conversation. Let’s assume that that’s the case. In the church hearings that took place in the United States, they took place because the spook industry was using access to classified material, leaking it and making that person a target. You don’t do that in the United States. You don’t have a spook industry who’s trying to formulate who’s going to win for president. And that’s what Brennan did. That’s what Comey did. And that’s what clapper did. And these documents show it. Why isn’t it, why, why are progressive’s not outraged by that? Who cares that Flynn did, you know, the conversation at all they got on Flynn at this point is the fact he committed perjury, probably should be prosecuted for that.

Mike Papantonio: But the real point, the real point here is you have the spook industry that is trying to manipulate the president of the United States. It’s an ugly story, man.

Farron Cousins: Well, what’s interesting to me is the fact that you had, you know, since the first day of the Patriot Act, you know, Democrats, progressives, liberals were all anti this whole intelligence apparatus. But then suddenly they come out and say, hey, we, we’re investigating Trump now. And then you saw this immediate shift where these same people who knew that these agencies were bad faith actors.

Farron Cousins: But now they’re cheering them. They’re cheering people like Brennan, who five years before they were calling for him to go to prison.

Mike Papantonio: Can you imagine if George Bush had released information about Obama through his spy agency?

Mike Papantonio: I mean, the, these progressives who don’t seem to think, hey, this is not a problem. Jesus Christ.