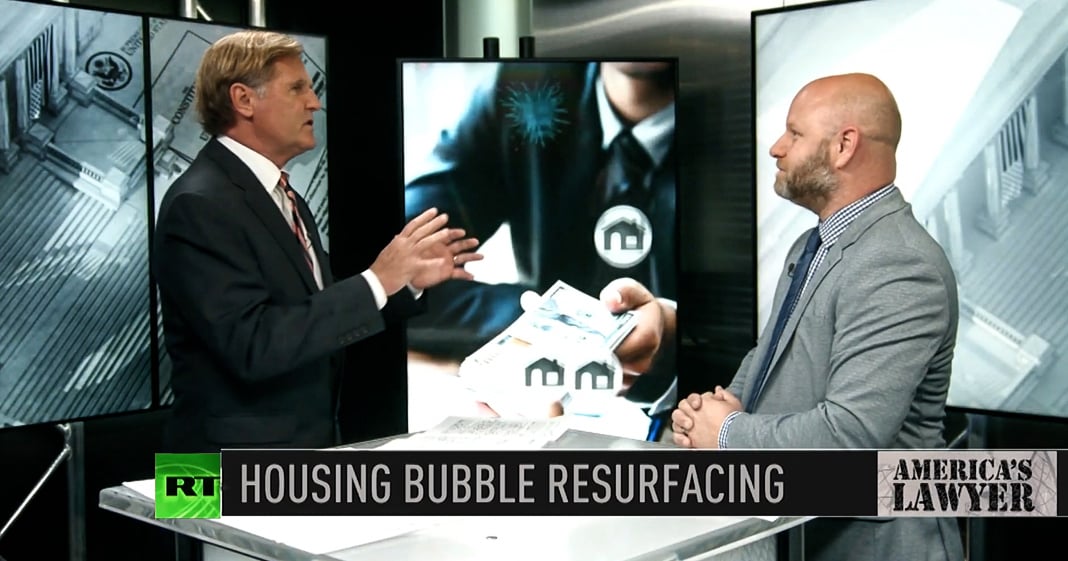 Mike Papantonio: Big banks are once again engaging in the same kind of criminal behavior that led to the last economic meltdown. This is what happens when bankers don’t get punished, when they don’t go to prison for breaking the law. Joining me to talk about this is Farron Cousins from the trial lawyer magazine and honestly one of the best young political commentators I think in the business. I really do believe you are Farron.

Farron Cousins: Well, thank you. I appreciate that.

Mike Papantonio: I honestly believe you are. So pick up the story would you.

Farron Cousins: Well, what we’re finding out now is whistleblowers of course have come forward and say, listen, the bank I’m working at and pro public has done a phenomenal job of tracking this. The bank I’m working at is doing the same thing they did back in 06, 07 and 08, which is using these mortgage backed securities, over inflating their values, selling them to investors, knowing they’re going to fail and reaping a huge profit from it. Now, a lot of that, I’m sure a lot of people say, I don’t understand most of those words you just said. So real quick, the mortgage backed security, what that is, you get all these, the bank takes a bunch of different mortgages, puts them together in a bundle, and then it sells that bundle to an investor like a bond. And as people pay the mortgages the people who’ve invested in that get paid. Now if the people don’t pay the mortgages, the investors have lost their money, but the bank made all theirs.

Mike Papantonio: Made the money up front.

Mike Papantonio: So what’s happening now is we saw it with the housing industry last time. We had bankers, we had banks and bankers, credible banks. I mean, who used to be credible.

Mike Papantonio: You know, they, they were just making stuff up. Somebody would come in and they would say, well, we know that you’re only making $30,000 a year, but we want to put you in this $300,000 home. So they would just make stuff up. They would. So they’re doing it again, but this time they’re doing it with commercial property and they’re bundling all this garbage up. This garbage, you know, garbage comes in, information that’s garbage comes in, says that this investor can afford to, to, to, can afford this building. They know they can’t. So actually they’re actually, they’re actually phonying up applications, aren’t they?

Farron Cousins: Right. What whistleblowers have said is that some of these applications, they’re seeing the income of the person seeking the loan, the bank is forging it up to 30%. So if you were making a hundred thousand a year, the bank says, you know what, we’re going to put down that you’re making $130,000 a year because that’s going to bump you up in income bracket and now you’re going to be, you know, qual. You can qualify for this loan that we know you can’t pay. And that’s, that’s the kicker here. And again, as you mentioned, now they’re doing it with the retail spaces and retail is dying across the country.

Mike Papantonio: Right, right. And it might after this covid pandemic, you know, people are saying, do we really need brick and mortar?

Mike Papantonio: Can’t we work from home? I think it’s going to take a big hit. The point is this, it’s the same criminals doing the same criminal activity again and what’s the worst thing? The worst thing is that we have, there’s not been any reform at all for the credit rating agencies.

Mike Papantonio: Why is that important?

Farron Cousins: Well, that’s important because these credit rating agencies are the ones they come in. They tell you whether or not this is worthwhile investment. If this is something that’s even going to pay off, if this bank is even credible.

Farron Cousins: And because we haven’t changed the way it’s all the same people doing the same thing, is working with one another.

Mike Papantonio: Because they didn’t go to prison.

Mike Papantonio: The last time the bankers didn’t go to prison. And if you, what I always found really weird about that story is during the S&L crisis, even Ronald Reagan put 800 bankers in prison. Okay. And so, so, we, we, we, we had a justice department with Eric Holder who represented all of these people, their law firm, Covington Burling represents all these criminal thugs. So nobody went to prison.