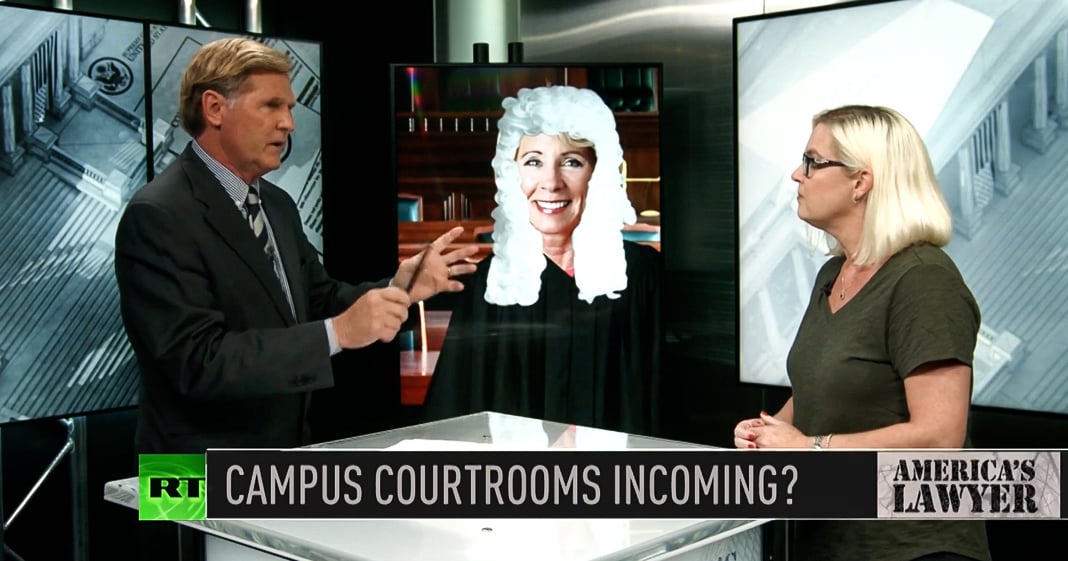 Mike Papantonio: While colleges across the country are already reeling from having classes and graduation ceremonies canceled due to the pandemic, education secretary, Betsy DeVos is at it again. She’s aggressively pushing for controversial new rules regarding sexual assault cases. I have Mollye Barrows, legal journalist for the national trial lawyer magazine. Mollye, this story is just beyond crazy.

Mike Papantonio: It’s almost like DeVos is coming in and saying, A, she doesn’t understand we already have a criminal justice system.

Mike Papantonio: And she wants to create a special criminal justice system for colleges.

Mike Papantonio: Take it from there. This is, this story is very disturbing.

Mollye Barrows: Right. So I’ll lay some of the ground work for the rules and the general areas that they affect and they are sweeping changes and it changes the standard of proof. The colleges now have the choice of determining if it’s clear and convincing or if it basically meets the 51%, convinces them that the person’s guilty. It also narrows the definition of sexual harassment. So it’s going to have, you’re going to have a smaller pool of types of complaints that could be applied formally and this is what’s really interesting too, a couple of things. Quasi court hearings when a person has moved forward with filing a formal complaint, they want to hold live or virtual, perhaps both, quasi court hearings where the students, both the accused and the accuser can be represented by attorneys. They can also be cross examined.

Also they have to report complaints, respond to complaints only that happened on campus or on properties that are controlled by the campus or somehow connected to it like a fraternity or sorority. So in essence, the purpose behind it, according to DeVos, was to give more rights to both the accused and the accuser. In other words, she threw out the Obama administration’s previous rules and said that they didn’t give enough due process to the accuser. So basically, or the accused I should say. So basically these rules give more rights to the accused and she says that the reason these courts are needed, these court, quasi court hearings are needed is because of upholding due process, which goes to your point as to we’ve got a process in place.

Mike Papantonio: Yeah, well both, both Obama got it wrong.

Mike Papantonio: This is so wrong. I can’t even, we don’t even have time to go into all the details.

Mike Papantonio: But here, here it is. Here it is. A college has an interest in making sure that the public doesn’t know how many assaults take place on their campus. Okay.

Mike Papantonio: So what they typically do, and she knows this, she knows exactly how they run this scam in colleges. They bring the student in, they say that’s been, that’s been sexually assaulted, raped. They say, you know, Mary, you really don’t want this to go public, do you?

Mollye Barrows: We’ll work it out.

Mike Papantonio: Now, so she’s talking due process. You know, the idea of due process here is absurd. Due process, it could be as simple as this. Have a hearing, see if there’s probable cause. See if there’s, see if, take it out of the hands of the college, kick it over to the criminal courts. Say we talked to the person who was raped, we talked to the person who was accused of doing the rape. We think there’s enough for you investigate to investigate, take it out of the college, give it to the criminal justice process.

Mike Papantonio: This is not for.

Mollye Barrows: That discourages victims from coming forward and reporting.

Mike Papantonio: Of course it does.

Mollye Barrows: Because basically, who’s going to want to talk about this stuff? Who’s going to be cross examined? And also real quick, to your point about discouraging, basically colleges are no longer to require coaches and supporting staff to report accusations of sexual harassment. They expect they will anyway, but the reason that they’ve given is that it gives autonomy to the students who may not want it reported, which supports your assertion, which I completely agree with. That they don’t want these accusations out.

Mike Papantonio: Okay. You have a client. Okay. Let’s say you got a client. Your client has been raped by some fraternity thug.

Mike Papantonio: Okay. You, you know that, that everything she says can be used against her somewhere. So now she’s appearing in front of these numb nuts, these college professor administrative type.

Mike Papantonio: Making, in what they call quasi court, making statements. Okay. So what if she wants to bring a criminal case? What if she does what she should do? Bring the criminal case. All she’s done is exposed her case already. She’s given the victim time to, to assemble his case and it’s nothing but bad for the accused. This is, this is, this is a nightmare.

Mollye Barrows: It is. And she’s going to see a lot of litigation as a result of it.

Mollye Barrows: Because the national women’s law center is already looking at filing litigation saying it denies rights to the accuser and it’s just a mess.

Mike Papantonio: She is not the sharpest tool in the shed. And we did a show on her last week where she’s trying to collect, collect money from student loans when there, when there’s a clear law that says you can’t do it right now. That’s the intelligence of this woman. That’s what we’re up against here with this.

Mollye Barrows: Well, she’s giving us plenty to talk about.

Mike Papantonio: Yeah, a lot to talk about. Thanks for joining me, Mollye.