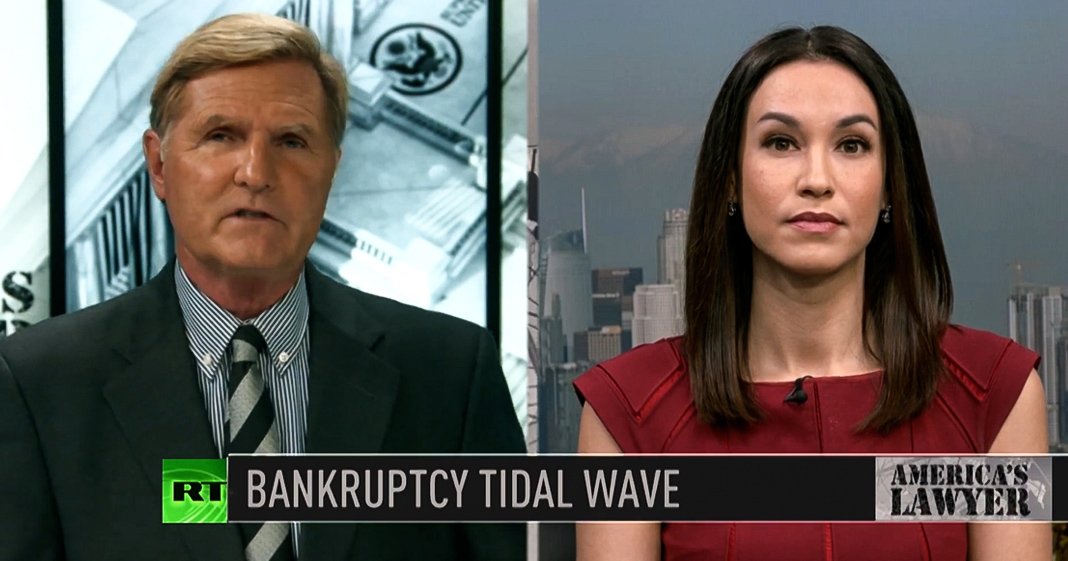 Via America’s Lawyer: RT Correspondent Brigida Santos joins Mike Papantonio to explain Chapter 7 and Chapter 11 bankruptcies, as courts across the country are preparing for a tidal wave of filings as a result of Coronavirus.

Mike Papantonio: America’s courts are expecting the largest surge ever in corporate and individual bankruptcies due to covid 19. Large public companies are gonna likely survive, but small businesses and individuals, well, they’re not going to fair all that well. RT’s Brigida Santos joins me to talk about that. Brigida, first of all, for those who aren’t familiar with how the process works in bankruptcy, take a quick look at what’s available to some of these companies that want to call on the bankruptcy legislation.

Brigida Santos: Sure. Look, bankruptcy is a court proceeding in which a judge examines the assets and liabilities of a company or individual that can’t pay their bills to determine whether those debts will be forgiven, restructured, or even reduced. Now, the process is supposed to give people and failing businesses an opportunity at a fresh start. However, a bankruptcy does remain on a credit report for seven to 10 years, so that certainly will have a negative effect, but still it’s supposed to be a safety net, so creditors don’t continue garnishing debtors wages or filing lawsuits and leans against them. Historically, the courts see a rise in these bankruptcy cases. Whenever there’s a rise in unemployment. Now in the past six weeks we’ve seen at least 30 million people in the United States file for unemployment due to the coronavirus recession. So those bankruptcy cases are likely going to hit the courts and start rising there accordingly.

Mike Papantonio: And what you see is you see corporate raiders come in many times. We were talking earlier about the Eastern Airlines with Frank Lorenzo when he came in, he sold off assets, he got rid of pension programs. He, he, he got rid of the people that were, you know, big salary people at the top. He completely changed the face of Eastern Airlines to where it just, it went out of business. But he was a corporate raider and I’m wondering, you’ve got Neiman Marcus, you’ve got JC Penney, you’ve got J. Crew, you have Krystal hamburgers. I mean, you’ve got McClatchy news, you’ve got Pier One Imports. The list is massive of these major companies that are, they look to me like they’re gonna take that route. They’re probably going to use a chapter 7. You’re going to see corporate raiders come in and take advantage of all this. And what I’m wondering is can the courts, can they even handle the flood of bankruptcy cases that they’re expecting?

Brigida Santos: You know, when these smaller companies file under chapter 7 they’re going to have a harder time than these bigger companies filing under chapter 11 because under chapter 7 a company has to stop all their operations. They go completely out of business and a court appointed trustee liquidates that company’s assets to pay off those debts. Now this happens and all employees of course, lose their jobs. We’re going to see a lot of chapter 7 bankruptcies from small local businesses including smaller retailers, restaurants, things like that. Now when it comes to these bigger companies, they often have a larger liquidation value that’s actually less than the revenue potential. So that’s why they file under chapter 11 of the US bankruptcy code, which allows the company to continue operating while their debts and assets are restructured, as you were talking about earlier, so that the company can actually eventually pay their creditors back and hopefully even become profitable again.

Now prior to the pandemic, many airlines, including Delta, United, American, et cetera, they were actually able to get out of bankruptcy in under four years. They’re in hot water now again, so we’ll have to see how that plays out, but the courts are expecting a major backlog of cases which could have an extremely negative impact on the already struggling economy and once a person files for bankruptcy, the process typically takes about six months or more to complete. It can take even longer now. So experts are urging Congress to double the number of bankruptcy judges and support personnel. But we really need a better solution because after bankruptcy, it’s really hard for individuals and businesses to get new lines of credit or loans to start over. We’re only seeing the beginning of the economic fallout from the pandemic, but these big corporations definitely have a leg up here.