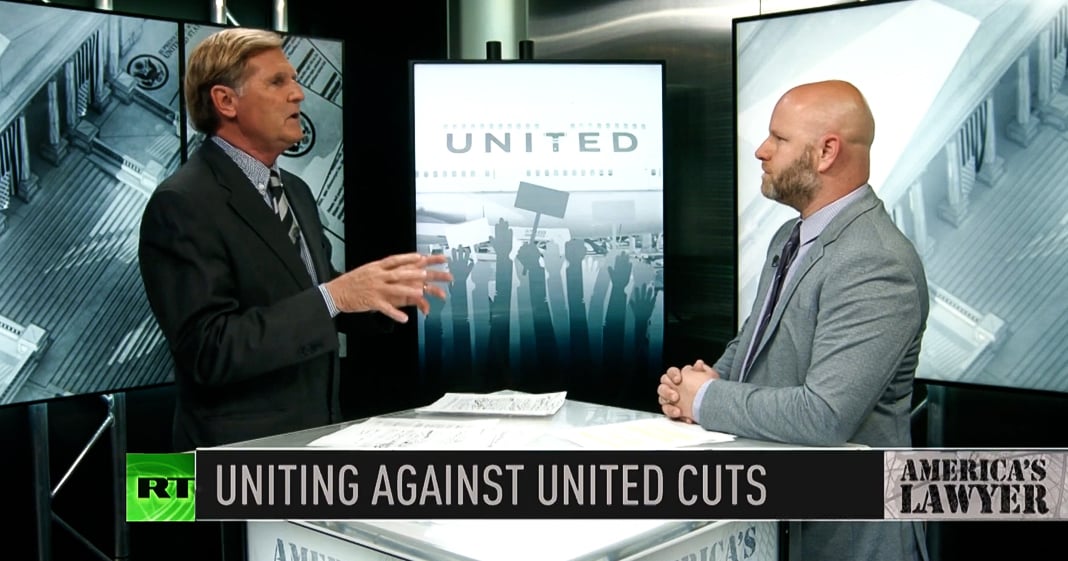 Mike Papantonio: Airline workers have filed a lawsuit against United Airlines after they announced that they would be firing workers, cutting back hours and taking billions in stimulus funds. What’s your take?

Farron Cousins: This is the least surprising thing that I think we have seen since these bailouts happened. Because Congress, you know, the house and the Senate tried to act like they were going to do something about it and said, listen corporations, you can’t just take billions of dollars and then screw over your workers. So you have to promise you’re not going to fire anybody. You’re not going to cut hours and you’re going to use this money to pay them.

Mike Papantonio: That was a promise they made, right?

Farron Cousins: Right. They said, absolutely we will do that And then less than two weeks after those checks cleared for airlines like United, they said, all right, listen up union workers. You’re all now part time. You’re not full time. You’re losing benefits, you’re losing pay. Everything that we promised we would save for you. In fact, we’re not going to do it and Congress isn’t going to do anything about it. So these workers have to turn to the courts.

Mike Papantonio: Let me tell you, I read the couple of stories. This is, this is written, this was what courthouse news, really well written article actually. The, this, the trend that I see is this. It’s not just United. Eastern Airlines was raided by a guy named Frank Lorenzo, okay. Eastern Airlines had union problems. They have problems with their pension. They had, they went through a bad time during the recession. And so Frank Lorenzo came and took that as an opportunity as a corporate raider. He came in, he sold their assets. He did away with the pension programs. He fired everybody. He de-unionized and ultimately took the airline into bankruptcy. I see the same thing happening. Now, understand United has already done this. United has already sought chapter, chapter 7 protection. Not chapter 11 but chapter 7 where they have reorganized. Anytime you see a crisis like this, you see corporate raiders moving in. So right now I think you have United, they don’t really care.

Farron Cousins: Oh, right. This is not a crisis for the airlines or for any of these other businesses you mentioned this is an opportunity. This is their time to say, okay, perfect. Now we can do this everybody, you know, it’s not going to look so bad if we file bankruptcy right now because everybody else is doing it.

Farron Cousins: We can get rid of all the liabilities that we may have had. We can move forward. We’ll let this person or this company buy us out for a large sum of money. We retain our manage, whatever it is, they are loving this. They may be whining in public and Congress begging for billions, but they know things are going to be so much better for them on the other side because they can use this as a chance to screw over people who have devoted their lives to these companies.

Mike Papantonio: Yeah. You’re going to see the Frank Lorenzo Eastern Airline thing play itself out with a lot of companies throughout country. Barbarians at the Gate. Go read it, Thomas Wolfe. It’s a great book.