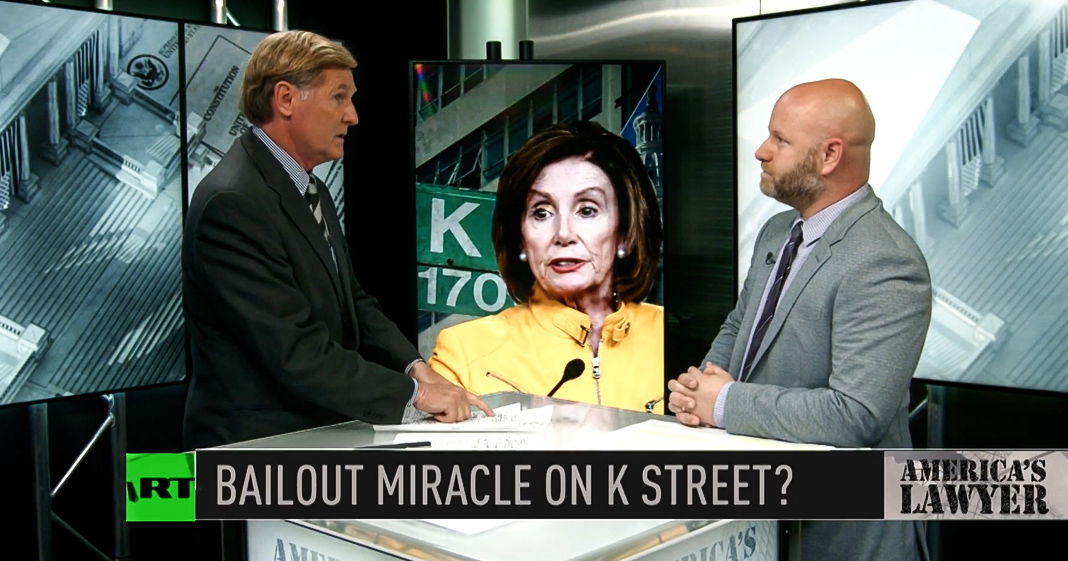 Mike Papantonio: Millions of American workers are desperate for a stimulus package of their own, but instead Nancy Pelosi, really true story, she’s trying to pass a bailout for K street lobbyists. Did I get that right? Joining me is Farron Cousins, trial lawyer magazine editor. I saw this story and to me it just rounded out the whole problem with Pelosi and democratic leadership.

Mike Papantonio: I don’t know what’s going on up here, but they’re not paying attention to the things that are gonna get them reelected. Are they?

Farron Cousins: Right. I mean, so far we’ve got no fewer than 33 million Americans that have lost their jobs in the last seven weeks. Those numbers are gonna go up again in the next day or two when we get the new reports and Pelosi and the Democrats came together, they worked on this legislation unveiled Wednesday and said, guess what Americans, we might be able to give you another $1,200 check. One time, this is not going to be recurring, but by goodness gracious, we have got to get this bailout passed so we can bail out K street lobbyists. They want these lobbyists, according to this new legislation that they’ve got ready to go, these lobbyists, million dollar lobbying firms would now suddenly be able to take money out of the paycheck protection plan, which is the small business loan program that’s designed to keep these mom and pop businesses running. But instead Pelosi came out and said, we want lobbyists to be able to raid it because they’ve spent a lot of money lobbying to get us to bail them out.

Mike Papantonio: Okay, now let’s be clear. This is leadership. This is, this is this woman. This is Nancy Pelosi. It’s Chuck Schumer, Maxine Waters. I mean, does she ever know even what day it is? Her name comes up in this and the point is this, look, this week the Democrats lost in Wisconsin by 15 points. Okay. They lost in an area they were supposed to win. California, California they turned a democratic region into a Republican. They lost by 12 points. Okay. So, so what is it that they’re not, what is, what is it they’re not understanding about their message right now? What do you think it is? I mean, what’s happening to where she doesn’t get it and democratic leadership doesn’t get it.

Farron Cousins: All the money that’s been flowing into politics for the last 20 years really has clearly clouded the judgment of these democratic representatives. They are the leadership. They have the house of representatives, and if they actually did something for the public, they would keep the house after November.

Farron Cousins: Right, exactly. Because Pelosi, who is losing, you know, her support left and right. People have lost faith in her as she.

Farron Cousins: Well, and the third wealthiest member in the house of representatives.

Mike Papantonio: You’ve done. You’ve done enough. Thank you. Go home. Chuck Schumer, go home. Let some new blood come in. Maxine Waters for God’s sakes. Please go home. But as I look, as I look at this, here’s, here’s what strikes me. These lobbyists that they’re trying to get money for, Farron, are the petrochemical lobby. It’s the petrochemical. It’s the chamber of commerce they’re trying to get lobby money for. It’s, it’s how about this, they want to get money for the lobbyists that lobby for debt collectors. Okay. Did you see that?

Mike Papantonio: Debt collectors. Now, how do you, how do you become, how do you get to the point to where you’re so disconnected that that doesn’t make sense? Let me run something by, I just want to know your reaction to this because, you know, we, we, we land different places very often. Whatever’s going on isn’t working for the Democrats. Okay. Today as we speak, Donald Trump is at a 45% approval rating, right? 42, 45, somewhere in that range.

Mike Papantonio: So, so it, the Democrats have thrown everything at him. They have the celebrity schlog, you know, all the celebrities. I hate the guy. I hate the guy. Robert De. I mean, yeah, Robert De Niro if he came out one more time saying, I hate Trump, they’re losing, it’s losing its effect. The comedy central folks at night. We hate Trump. That’s not working. This idea of, this idea that, you know, that Trump, this Putin Trump connection, it’s not working. This idea that Trump is responsible for the coronavirus. It’s not working. My point is they need to find something that works and they, they’re, they’re, It’s almost like they’re unwilling to do that, Farron. We have the list. This list is very clear the things they’ve tried, it’s not working.