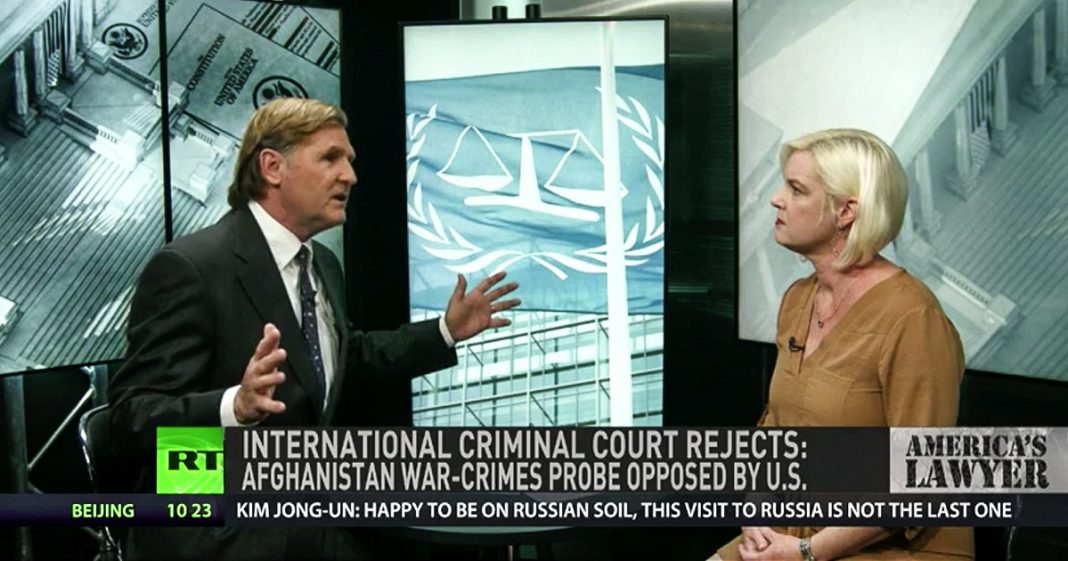 Mike Papantonio: Few months ago we reported on an investigation into whether or not generic drug makers were colluding to raise prices and to keep competitors out of certain markets. That investigation has now grown into full blown lawsuits coming from 44 states. I have Farron Cousins from the Trial Lawyer Magazine with me now to explain what is happening. Well, it’s pretty apparent what’s happening is price gouging and we’ve been talking about this story. Finally, finally, you know, I still don’t know that, that television media is covering this story because TV media is making so much money on advertisements. I mean it’s, what is it about every eight minutes, there’s a pharmaceutical advertisement?

Farron Cousins: Yeah, I mean they’re, they’re all over the place in corporate media and you know, the, the corporate news media is no exception to that. That’s where they get a lot of their money. But with this story, you know, again, this is what we talked about a few years ago. This is the one that had the sandbox where you have these drug companies, the generic makers, they go into a specific market and they say, I’m going to take one pharmacy. You take another, you other company, you take another, we can all raise our prices accordingly. But nobody competes at the same pharmacy in a given area. That that’s the overall kind of scheme that the investigators have called a cartel basically. So now what we found is that basically the story everybody’s been waiting for you have collusion and obstruction of justice is what they’re describing it as. Because the obstruction of justice comes from the fact that you have Teva Pharmaceuticals deleting evidence, deleting text messages, deleting emails that showed that their executives were working with the other pharmacies to do this and instructing them on what to say to investigators.

Mike Papantonio: Yeah, let me put in perspective. Last week or a couple of weeks ago, we did a show where the pharmaceutical company had marked up a drug 100000%. You remember? 100 not making that up. It was a drug for babies that were, the children were having seizures and the company marked it up 100000%. Now this story talks about the run of the mill markup is, is it 100%, 200%, 20000%. The numbers of these markups are staggering. Okay. 100000% is not unusual and that’s a staggering number. And what ends up happening is these companies that, that people that are named and people like Pfizer, Teva, Novartis, Mylan. And what I love about this story is that also you have dozens of senior executives that are, have been named. As matter of fact, one of the executives, they, I mean is in the story, that fella named Nisha Patel.

Mike Papantonio: So Nisha Patel goes about, no this is girl, a woman, isn’t it?

Farron Cousins: I believe so.

Mike Papantonio: The collusion is maybe sometimes a little more difficult to prove. Prosecutors are going to be able to prove it here, I promise you. But when you get to, to collusion, you’ve, you’ve moved from just a pure civil action, if it involves any type of criminal collusion. I’m wondering if this is where this goes. Where do you think, what do you think?

Farron Cousins: I think absolutely. I think in this particular instance, this is not going to be something that is difficult to prove because they may not have Nisha Patel’s communications anymore, but keep in mind she was destroying evidence in 2016. This investigation began in 2014 I believe. 44 state attorneys general are on top of this.

Mike Papantonio: And she, and she’s still destroying material.

Farron Cousins: Right, but there’s no way she could have destroyed everything, so there’s a good chance parts of it are still out there. Obstruction hundred percent that’s going to be easy.

Mike Papantonio: Prosecution, what’s your call? I mean, yeah, of course it’s impossible to get to, to get the government to prosecute anybody who’s dressed up in a three piece suit or has a Rolex watch or maybe is in Washington, I mean in Washington or Wall Street, forget trying to get prosecution. What’s your call on this one though?

Farron Cousins: I believe that Patel is going to end up singing like a bird to, to the investigators and saying, listen, please don’t prosecute me. You want to know the truth. Here’s what happened. At the end of the day, everybody’s probably going to get fined a ridiculous amount that’s still less than they made gouging consumers with these markups.

Mike Papantonio: In other words, here, here it is. They bring charges and the company pays their way out of the charges. They say, well, we’ll pay you $2 billion. In the end, people don’t realize taxpayers end up paying that $2 billion because it’s a write off for the company. And so, you know, that’s what they’ve been doing for decades now. So if as we look at this case, these are drugs that affect, I mean these are serious drugs. They were saving people’s lives with HIV. They’re saying the markup was ridiculous. People couldn’t even afford to get HIV drugs, antidepressants, cancer, drugs. These weren’t simply, this was an aspirin or you know, minor kind of medication. This was life saving kind of material. And these people are so callous that they still marked it up. They colluded. They had, as you point out, their sandbox where they would meet in exotic places. Right? Tell us about that.

Farron Cousins: Yeah, they, they would go have these wonderful dinners, these meetings, I forget the exact name of it that we had talked about in the past, but they actually had a name for the meetings, their little club meetings, and that’s when they would sit there and break up the pharmacies in any given city, county, whatever it was, and said, all right, we’re all gonna play in the sandbox. But in order to play nicely, we have to divide the sandbox. Nobody steps onto the other one’s turf. We all get an equal share. And this is part of the collusion part, we all raise our prices accordingly. So that way our generic is not more expensive than your generic. We’re all on the same page. And that’s what allowed them to do things like right here. Albuterol sulfate, used to treat asthma and other lung conditions. They raised the price on that. The generic 4,014%.

Mike Papantonio: Judges with the International Criminal Court, say there’s enough reason to believe US armed forces and the CIA committed war crimes in Afghanistan, but they declined to investigate the allegations. Legal journalist Mollye Barrows with the national Trial Lawyer Magazine has more. Tell me about this story.

Mollye Barrows: Well, it’s interesting. Basically the International Criminal Court, a prosecutor was bringing some 20,000 pages of documentation showing that a number of groups, including the Afghan, the Taliban Afghan forces as well as US personnel, including the CIA, had committed a series of war crimes dating back to 2003. So they wanted permission from the ICC to investigate these and basically the ICC took a look at it and said, it’s not that we don’t think that there’s grounds to investigate, but we simply don’t see that this is going to produce any kind of successful result as far as an investigation. We’re getting no cooperation from the U S or any other parties that you want to investigate. There’s still a war going on in Afghanistan. So due to the circumstances of this case, we’re not going to pursue an investigation. And of course you have human rights groups reacting saying we should be, this is sending the wrong message. It’s basically saying if you’re out of reach and uncooperative, then you can get away with committing atrocities. And a, and the United States of course is thrilled because they don’t feel like that they should be held accountable to the ICC. They never have.

Mike Papantonio: Well that’s what, that’s why they are, they’re so down on Julian Assange. I mean Julian Assange right now is being victimized in the worst kind of way and the American journalism process thinks it’s wonderful. Yeah, let’s, let’s attack Julian Assange cause he’s, he’s one of the, he’s one of the vehicles that actually told some of these stories. And so, you know, it’s almost, it’s almost like saying, you know, Nierenberg really wasn’t all that important. We really couldn’t get any convictions. If you take a look at some of these crimes, they are horrendous.

Mike Papantonio: And, and so, so you have the, you have an international cabal that says, yeah, this is really bad. Genocide is really bad. We hate that we killed all these…

Mollye Barrows: We sure hate it.

Mollye Barrows: Well, apparently so, and that’s exactly what some of these other foreign entities are saying. Is the United States essentially bullying or throwing its weight around so that they’re never held responsible? But according to the United States, they feel like that in the White House issued a statement on this in particular welcoming this decision and saying that, you know, we hold ourselves and our citizens to the highest ethical standards as well. But we certainly know that that is not the case. I mean, we are, it’s blurry why we’re still in Yemen. Which is the Saudi led, you know, conflict. So it, it, it, it, it, if we’re going to take this stance just saying we didn’t do it, doesn’t really come across like we’re being a good neighbor.

Mike Papantonio: Well, let me, let me tell, let me, let me take you back in time. Let me take you when the UK and the US and France and we all, everybody understood that Henry Kissinger had was, was the little freak behind Cambodia. He was the little freak who assassinated, you know, had the assassination of Allende and the same thing flared up then. It was, shouldn’t we, shouldn’t we take a look at this? Shouldn’t we at least even if we’re not going to prosecute the little character, shouldn’t we take a look at it? And it all died and the only people that were right, I mean, the only people that really preserve that history are people like Howard Zinn and Chalmers Johnson because there was no hearing.

Mike Papantonio: You see, you begin by putting, you might lose the conviction. Chances are you can’t make it happen, but you tell the story. And so that’s what that little freak Henry Kissinger got away with. You know, there’s no quick, no question. He had Allende murdered and replaced with Pinochet. They had all the information. If they would’ve just said, maybe we can’t convict him, but we’re going to put a trial on anyway. We’re going to show the, show the world what happened here.

Mollye Barrows: Right and in this case, we did the exact opposite. Instead of saying we’re going to have some form of transparency to show that we’re at least going to be good neighbors and part of the process, the White House even stripped the US visa credentials basically of the prosecutor who was looking into this war crime.

Mike Papantonio: Thanks for joining me. Okay.