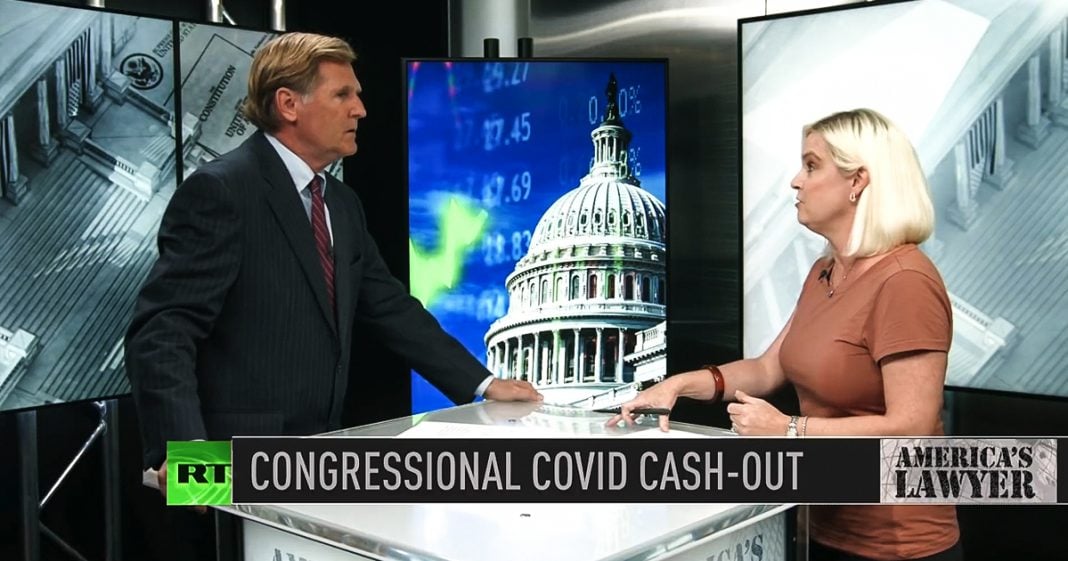 Mike Papantonio: Betsy DeVos and her department of education are being sued again for violating the law by collecting on student loans. These are loans that she’s been told that she cannot collect, but that hasn’t stopped her. Joining me to talk about this is Farron Cousins, editor of the trial lawyer magazine. What’s not, what memo isn’t she reading? I mean, the law is very clear. I mean, it came under the CARES act, right?

Farron Cousins: All you have to do, Betsy, is just not collect on these defaulted student, or delinquent student loans. Just don’t take the money. That’s all you have to do for just right now.

Mike Papantonio: It actually prohibits the, the act itself prohibits her from doing this.

Farron Cousins: Right and she came out on, I think it was March 25th of this year and said, okay, my department is not, we’re not going to garnish wages. We’re not going to collect on these delinquent debts. We will not do any of this. We will 100% comply with the law and then fast forward a month later, she’s still garnishing wages, taking money from people who are struggling right now. So they have been forced to file a lawsuit to get the education department to stop doing this.

Mike Papantonio: Okay, I hear the defense. The defense is, well, it’s a big bureaucracy. People didn’t get the message, but this isn’t the first time. This is, they’ve already been put on notice that DeVos is an idiot.

Mike Papantonio: Okay. So idiot woman ignores all that. Right? And she knows that the act itself, all you gotta do is read the act. And when you read the act, it says no collection up until September 30th of 2020. Right?

Farron Cousins: Right. And, you know, you brought up a really great point there. You know, when you’re looking at any kind of criminal prosecution, you, you try to establish that pattern of behavior. So all of her defenses right now are one, it’s a big bureaucracy. It’s taken a long time. Number two, we’re trying to contact all of these debt collection agencies that we’ve contracted and oh gosh, they just can’t seem to get it done. But then you look at her history, she has done this repeatedly in spite of being held in contempt of court one time. In spite of being sued. She did it with the students from Corinthian college, still garnished their wages, which had been ordered by two different courts to not do it.

Mike Papantonio: Well, I mean, is she just not there? I mean, really, I’m amazed at this. A 10th grader could read this act and say, Betsy, you can’t do that. But 285,000 people in the US are now subject to this problem. Right?

Farron Cousins: Right. And the department of education very easily could go through their databases. They know who they’ve contracted to collect which student loans. It’s a matter of emails or phone calls. They have the capabilities they’re choosing to not do it.

Mike Papantonio: The coronavirus pandemic has left millions of Americans financially devastated, leaving them to look towards hopefully lawmakers for relief.

Mike Papantonio: But, but reports show that senators have been raking in huge profits from trading stocks. Ah, this is an ugly story insider trade.

Mollye Barrows: So much money and they just wanted it.

Mike Papantonio: They just want all the money. So, so, okay. Lay it out for us. How does it happen? They have this information. We thought that it was only a couple, right? What is it, 27 Dem.

Mollye Barrows: They’re all like, it was okay. It wasn’t really nonpublic information.

Mike Papantonio: It was 27 Democrats, 21 Repub, something like that.

Mike Papantonio: Any socialists in there?

Mollye Barrows: You know, it’s not partisan as far as we know. No, I guess greed is equal opportunity and knows no political boundaries.

Mollye Barrows: But 1500 stock transactions worth up to $158 million between February and April. This came as a result of a report by campaign legal center. They did an analysis of financial disclosures of what these senators did and when they did it. And it’s so interesting when you look at some of the connections, like you have Georgia Republican Senator Kelly Loeffler, her husband is the chairman of the New York stock exchange. Hmm, could there be a connection there? But what’s interesting Pap is what you and I were talking about. It’s going to be, most experts are saying it’s going to be difficult to convict them and prosecute them. Richard Burr is the big one now, Senate intelligence chairman, Richard Burr, he’s been hit with a lawsuit by Wyndham Resorts for selling 150,000 of his stock because he was getting those intelligence briefings back in February and he was like, I was watching CNN, CNBC and their reports on health and science coming out of Asia and through my own critical thinking skills, I just started selling all this stuff.

Mike Papantonio: It’s coming from the department of justice. They’re saying, oh, you don’t understand how difficult., No, it’s not difficult. Do your job as a, as a prosecutor.

Mike Papantonio: If you lose, you lose. But the truth is, is this started out with, you know, investigations into Richard Burr.

Mike Papantonio: And as you say, Kelly Loeffler. Now is Feinstein. It’s 27 Democrats.

Mike Papantonio: And 21, 21 Republicans and one independent.

Mike Papantonio: And here’s what’s so remarkably ugly about it. Right now, we don’t even know where the House of representatives is. Pelosi has said, stay at home. They’re doing nothing.

Mike Papantonio: And the average American out there is wondering, how can I, how can I feed my family? How can I pay rent. If I hear one more time, the FBI or the SEC or department of justice.

Mike Papantonio: Oh this, we’re investigating, but this is just too difficult. No, it’s not.

Mollye Barrows: No, and the laws clearly define that.

Mollye Barrows: You’re right and they’re already multimillionaires. That’s another thing that came out of this study was that most of these people, going to your point of the average American citizen is hurting way worse than they ever thought about hurting. They’re like, oh, well I’ll hurt tomorrow after I sell off some more stocks. But financially, these people are already very wealthy. And so when you start getting into the nitty gritty of some of these laws, there’s the law that applies to all of us, including members of Congress. It was rule 10B5 is basically the one that says, hey.

Mollye Barrows: Well, this one was just for everyone. Hey guys, you can’t take private information, insider information, if you will, and use it to cash in. It’s illegal, including you too Congress. But they were doing it so much that they had to come up with their own special law. And that was a stock, the stock act of 2012 and Senator Gillibrand is the one who helped write that. And that Vice recently followed up with her about her reaction to this, you know, slew of sales that you’ve seen of stocks involving all of these members of Congress and she just was saying how basically appalling that it was.

Mollye Barrows: That it seemed very transparent and obvious to her that they were taking advantage of insider information. So she wants to tighten it up even further. But how ashamed that you had to make a special law so that Congress had to obey the rules that the rest of us have to obey.

Mike Papantonio: Right. They are, we can’t trust Congress.

Mike Papantonio: To the fact that we have to tell them, this is your special law. This is written for you because you’re a bunch of congressional thugs.

Mike Papantonio: And so, so now this is the thing to watch on Gillibrand. Gillibrand is going to come out and she’s going to make these public statements. Watch what she does behind the scenes, right.

Mollye Barrows: She going to sell stocks too?

Mike Papantonio: No, no, she’s not going to sell stocks, but it’s going to be, she’s going to soft sell the idea. 27 Democrats, right?

Mike Papantonio: The prosecutors, these lifetime prosecutors that are fat, dumb and happy.

Mike Papantonio: In their position. They don’t want to take any risks unless it’s low hanging fruit. You watch this case.

Mollye Barrows: Which is usually the average person.

Mike Papantonio: Who has no, no political clout.

Mollye Barrows: You see it though all parts of the criminal justice system.

Mike Papantonio: Yeah. Watch, watch on this. This is exactly what’s going to happen. Thank you for joining me. Okay.