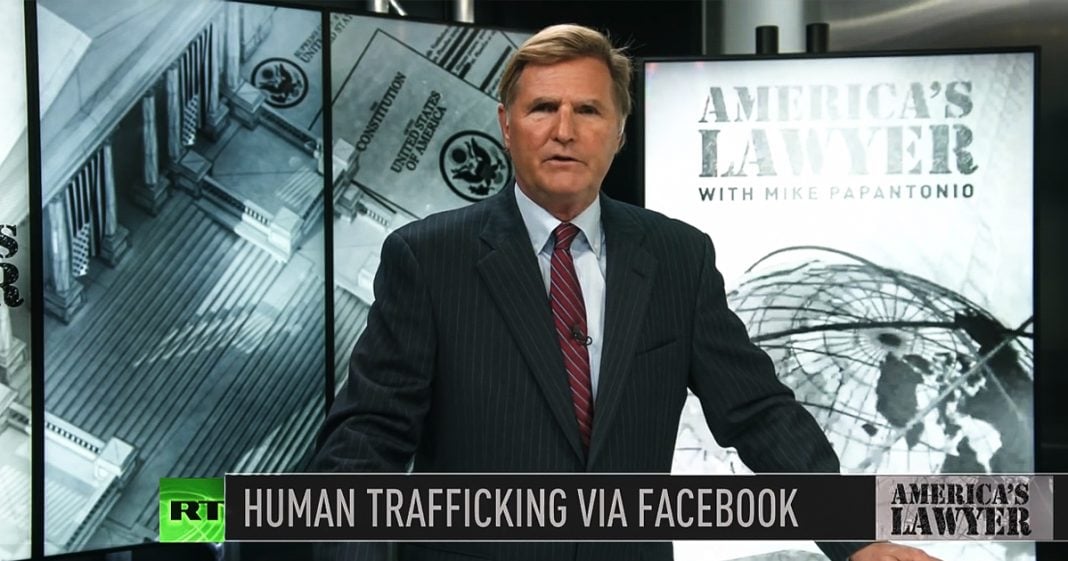 Via America’s Lawyer: The Texas 14th court of appeals rejected a petition by Facebook last week where the social media giant tried to claim that they were immune from a group of lawsuits brought by the victims of human trafficking. Mike Papantonio explains more.

And finally tonight, some good news. The Texas 14th court of appeals rejected a petition by Facebook last week where the social media giant tried to claim that they were immune from a group of lawsuits brought by the victims of human trafficking. In three separate lawsuits, women claimed that they were trafficked by individuals who learned them in by way of Facebook and the women were suing, the women were suing Facebook for not policing this kind of behavior. We’ve seen these lawsuits many times, but Facebook thought they were above that. In their petition to the court, Facebook argued that they had blanket immunity for anything posted on the site and they cited the communications decency act, which was a gift, a gift by Bill Clinton in 1996. It was a political exchange. This act does protect internet service and platform providers for being sued for posts that they have no control over.

But the judges in Texas said that this new law doesn’t apply in this instance, this was an exception. This is one that Bill Clinton did not give this huge gift to the industry. They didn’t get away with this and my prediction is they won’t. This is a huge victory in the fight against human trafficking. Many victims have been lured by contacts on social media, and it’s time for these social media companies like Facebook to either do something to crack down on this problem or suffer very, very severe penalties for their failures. They know exactly what they’re doing here. It’s all about the dollar.

That’s all for tonight. Find us on Twitter and on Facebook @facebook.com/rtamericaslawyer. You can watch all RT America programs on Direct TV, Channel 321 and also stream them live on YouTube and be sure to check out RT’s great new portable app. You’re going to love this app because you can watch all of your favorite shows in any area of the world. I’m Mike Papantonio and this is America’s Lawyer, where every week we tell you the stories that corporate media is ordered not to tell because their advertisers order them not to tell those stories. Have a great night.