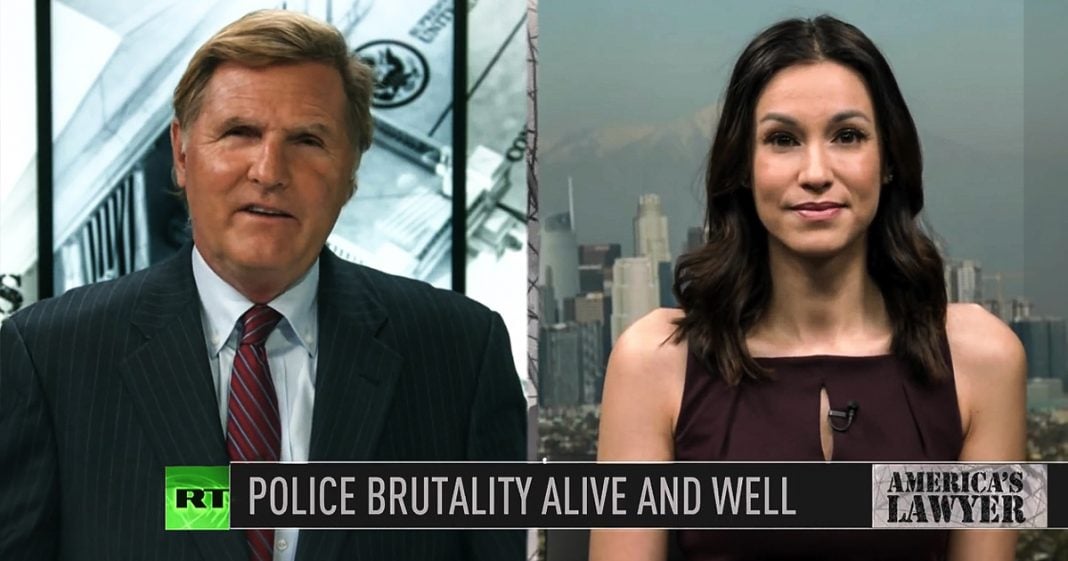 Via America’s Lawyer: Mike Papantonio is joined by RT Correspondent, Brigida Santos, to spotlight graphic videos of police officers in California and New York brutally assaulting people of color, reminding us there remains a culture of racial violence embedded in law enforcement.

Mike Papantonio: A new viral video reveals that police brutality against people of color in California continues despite years of internal investigations into documented abuse. Several lawsuits now accuse local cities of fostering a culture of violence among local law enforcement. RT’s Brigida Santos joins me now to talk about this. Brigida, you know, the first thing that comes to my mind is that I’ve kind of thought these, these stories, I thought maybe, you know, after all this rash of stories that we were doing literally every week that maybe this problem had gone away, but your position is, no, it hadn’t gone away. It’s just the media doesn’t have enough sense to report it. Former Democrat presidential contenders, Kamala Harris and Julián Castro, they, they brought national attention to a video capturing a white police officer in Rancho, Rancho Cordova I think it was, is my memory. They were brutally assaulting an underage African American male. Walk me through that. Walk me through that story. I just have bits and pieces that that was, that actually did come out in the media.

Brigida Santos: Sure. The footage shows a Rancho Cordova deputy pinning down a 14 year old male child and punching him repeatedly as he screams. Now in a statement, the police department seems to be supporting the actions of this officer. They say the deputy saw what he believed to be a hand to hand exchange between an adult and juvenile, that the deputy attempted to detain the young man on reasonable suspicion that criminal activity was occurring. Now the police department claims that the boy resisted arrest and was found to have gotten a cigar from an adult, which is illegal. So they decided to respond with force. Now the Rancho Cordova police department has now launched an excessive force investigation, but so far it does seem like it’s standing behind the actions of the officer based on multiple statements that they’ve actually put out.

Mike Papantonio: Wait, let me get this right. They’re stay, they’re standing behind the officer who do we know at this point that there was an exchange of a cigar? Is, I mean, I really am wondering.

Brigida Santos: Well, they say that that’s what they believe happened because they found a cigar on this kid afterwards and they believe that’s what was exchanged. That’s all he had on him. And, you know, the, the response absolutely does not match what the alleged crime was there.

Mike Papantonio: Yeah. Okay. Another lawsuit was filed at the end of March, accusing Sacramento Sheriff’s deputies of using excessive force. Again, there was only bits and pieces. I mean, I follow this type of thing every day and still, even with this, there were only bits and pieces of this story. Can you tell me about that case?

Brigida Santos: Sure. The Rancho Cordova police department is part of the Sacramento County Sheriff’s office, which also faces its own allegations of deploying excessive force against civilians. Now, the March lawsuit was filed by an African American professor named Dr. Thomas Williams. He says that Sacramento Sheriff’s deputies deployed excessive force against him and his brother after a white neighbor accused them of breaking into their own home. The police officers who responded to the call reportedly showed up, drew their guns, through the Williams brothers to the ground and proceeded to knee and elbow them in the head and face. One of the brothers says he was also placed in a chokehold. The deputies only realized that the men were actually telling the truth about living at their own house after they beat them up. When they then checked the brother’s driver’s licenses. You know, they could have started there, but of course they don’t.

Mike Papantonio: Well. Yeah. Beyond California, your position and you’ve been following these stories is this is, this is really all over the country. We’re seeing reports of the NYPD officers using social distancing measures as a precursor to violence in this pandemic. How have we seen enforcement of these kinds of problems during this pandemic? Has it, has it been, you know, let’s, let’s engage with violence. Let’s send a message. Let’s make it clear that rules can’t be broken. What is your take. Not let, let’s move from California. Let’s look nationally and say, overall, how has this worked itself out?

Brigida Santos: Well, it, police across the country, I don’t think much has changed. The difference now is that people are starting to ask themselves, you know, where is the line between protecting public health and safety, civil liberties and an authoritarian government and police force? You know, this week in NYPD police officer was recorded on video hitting a man and brandishing a gun in an attempt to break up a group of people who were reportedly violating social distancing rules. But the officer himself was also in violation of the New York city rules that require everyone to wear face coverings in public. So now people are really starting to see on a national scale what’s happening to people of color also bleeding out into other aspects of life. And unfortunately it’s going to take an incident where somebody who is white gets treated the way that a lot of these people of color get treated by police.

Mike Papantonio: Well I, I think after the, the rash of stories that were virtually every week about this type of violence, there were conclusions. The training’s bad, the recruiting is bad, the education level of the police officers is bad. The culture is promoted from the very top. These are the people we’re looking for. The old, you know, it’s kind of like a Bruce Willis kind of, you know, everybody wants to be Bruce Willis. They want to be the baddest cat on the road. And rather than doing simple or the MMPI rather than a personality profile of these folks before they get a gun and before they get a badge, there’s ways to solve this problem and it’s, it doesn’t sound solved to me, Brigida. And I, I hate think we’re gonna be covering more stories like this. Thank you for joining me. Okay.