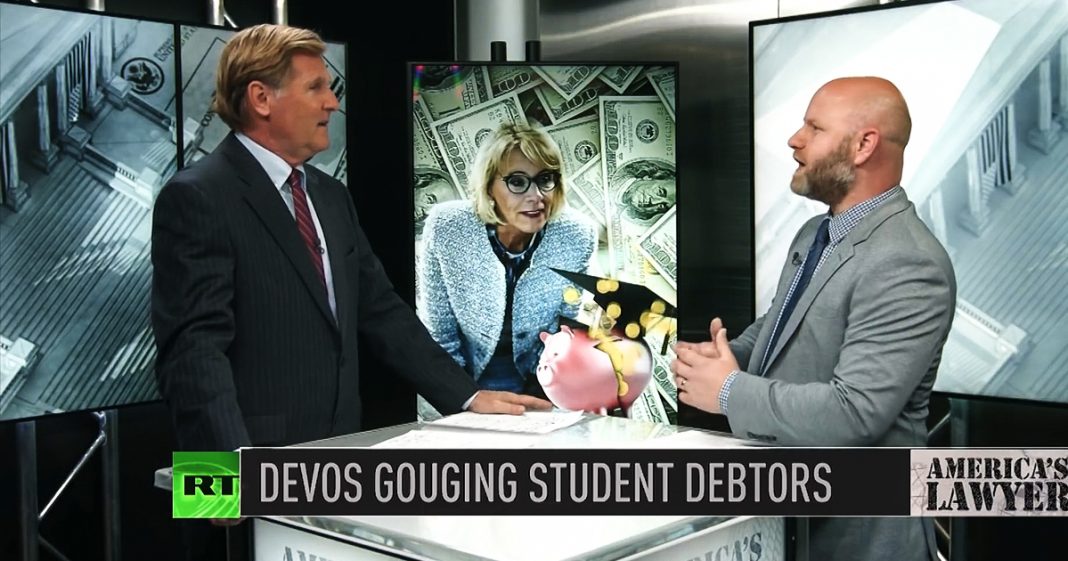 Mike Papantonio: Betsy DeVos and her department of education are being sued again for violating the law by collecting on student loans. These are loans that she’s been told that she cannot collect, but that hasn’t stopped her. Joining me to talk about this is Farron Cousins, editor of the trial lawyer magazine. What’s not, what memo isn’t she reading? I mean, the law is very clear. I mean, it came under the CARES act, right?

Farron Cousins: All you have to do, Betsy, is just not collect on these defaulted student, or delinquent student loans. Just don’t take the money. That’s all you have to do for just right now.

Mike Papantonio: It actually prohibits the, the act itself prohibits her from doing this.

Farron Cousins: Right and she came out on, I think it was March 25th of this year and said, okay, my department is not, we’re not going to garnish wages. We’re not going to collect on these delinquent debts. We will not do any of this. We will 100% comply with the law and then fast forward a month later, she’s still garnishing wages, taking money from people who are struggling right now. So they have been forced to file a lawsuit to get the education department to stop doing this.

Mike Papantonio: Okay, I hear the defense. The defense is, well, it’s a big bureaucracy. People didn’t get the message, but this isn’t the first time. This is, they’ve already been put on notice that DeVos is an idiot.

Mike Papantonio: Okay. So idiot woman ignores all that. Right? And she knows that the act itself, all you gotta do is read the act. And when you read the act, it says no collection up until September 30th of 2020. Right?

Farron Cousins: Right. And, you know, you brought up a really great point there. You know, when you’re looking at any kind of criminal prosecution, you, you try to establish that pattern of behavior. So all of her defenses right now are one, it’s a big bureaucracy. It’s taken a long time. Number two, we’re trying to contact all of these debt collection agencies that we’ve contracted and oh gosh, they just can’t seem to get it done. But then you look at her history, she has done this repeatedly in spite of being held in contempt of court one time. In spite of being sued. She did it with the students from Corinthian college, still garnished their wages, which had been ordered by two different courts to not do it.

Mike Papantonio: Well, I mean, is she just not there? I mean, really, I’m amazed at this. A 10th grader could read this act and say, Betsy, you can’t do that. But 285,000 people in the US are now subject to this problem. Right?

Farron Cousins: Right. And the department of education very easily could go through their databases. They know who they’ve contracted to collect which student loans. It’s a matter of emails or phone calls. They have the capabilities they’re choosing to not do it.