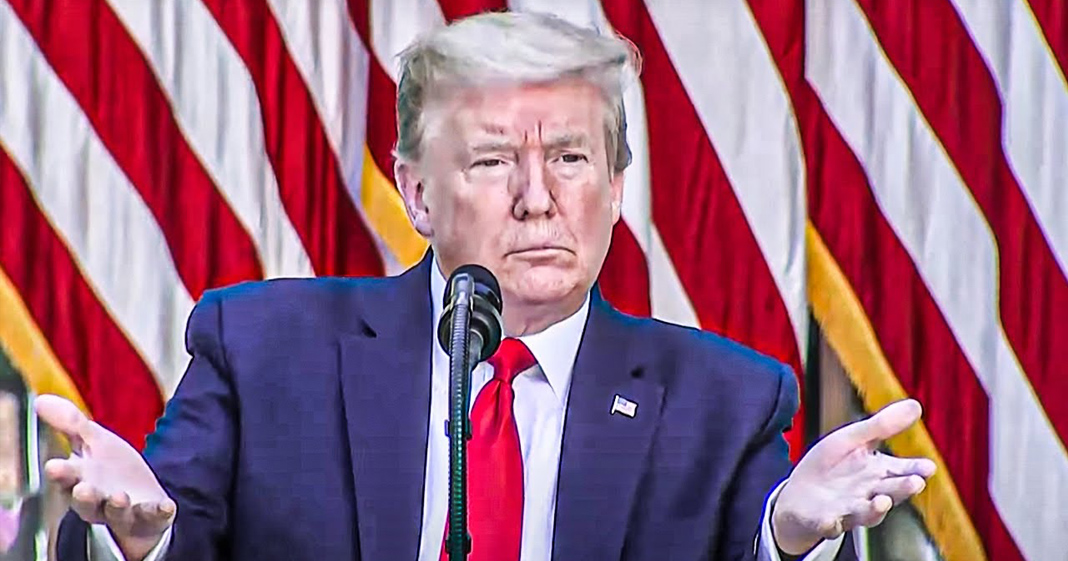 According to new reports, several members of the Trump administration – including Trump himself – believe that the official death toll of the Coronavirus is being exaggerated to make the President look like a failure. There is absolutely no evidence at all to back up these claims, but that has never stopped this administration. Reality isn’t being kind to them, so they are making up their own, as Ring of Fire’s Farron Cousins explains.

According to a report in Axios yesterday, Donald Trump and several other members of his administration actually believe that the death toll from COVID 19 is being exaggerated both in an effort to hurt Donald Trump and his reelection chances as well as in an effort by hospitals to commit Medicaid fraud. Here’s what’s happening right now. Excuse me. Medicare fraud, not Medicaid, Medicare. Uh, right now the federal government is offering a 20%, uh, I guess you’d call it bonus for hospitals treating patients with Corona virus. So they’re already getting Medicare funding. They’re going to get 20% more, uh, for the Corona virus cases that they have. So according to members of the Trump administration, they’re inflating the numbers. They’re just making it up. They know these people weren’t sick with Corona virus, but they want their hands on that money. So they’re willing to commit Medicare fraud in order to get it.

Now, here’s the reason that is completely unlikely and unrealistic because Medicare offers different kinds of funding, different incentives like this, uh, for very different diagnoses all the time. Always have. So hospitals could have been doing this from day one, not just with coronavirus but safer, certain kinds of cancer, certain kinds of heart ailments, many other different diseases they could have been getting these bonuses for for decades. They just now realized, Oh Whoa, why was it to start with coronavirus problem is when hospitals do this, they get busted and it’s not worth the risk. Just ask Senator Rick Scott who committed massive, massive fraud for Medicaid through his former company that he swears he had nothing to do with and he was never criminally charged for it, but his company had to pay back over a billion dollars because they were essentially upcoding. And that’s what this is.

That’s what the administration alleges these hospitals are doing is upcoding. You know, maybe somebody comes in, drops dead from a heart attack, but the hospital says, nah, we’re going to say that that was Corona virus cause we get 20% back on that now. These are things that are actually verifiable. We know what a person dies from because a hospital does in fact record that there are whistleblowers in hospitals, people who understand that unethical behavior needs to be punished and that is actually how a lot of these things come to light. A whistleblower within an organization like this, typically a healthcare organization will contact the federal government and say, Hey, I believe my organization is committing Medicare, Medicaid fraud to whatever kind of fraud it is because these people died from X, but we said they died from Y so we could get more federal funding.

That is not happening. There is zero evidence right now to support these claims and that’s why I don’t think the administration is being serious about their claim that, Oh, it’s being exaggerated because the the money issue in hospital, no, they want us to think it’s being exaggerated because they want Donald Trump’s response to it to look better. That’s what’s happening. The public knows that Donald Trump has been an absolute disaster with regards to the response to the pandemic. There is no shaking that for this administration. That is a thing. That is the public’s belief and it’s reality, right? That’s who we know. That’s reality. This man, I don’t care if you love him or hate him. It’s pretty obvious. He has not done a good job on this. We should all be honest with ourselves about that. But he’s not capable of being honest with himself.

He’s not capable of introspection. He’s not capable of brutal honesty about his own actions. So they have to turn to these alternative realities of, Oh well, uh, the numbers are inflated. I did better than I’m getting credit for because they’re lying about it because they want money and they don’t want me to win reelection. Those are the talking points they’re going to stick with for now cause they think it’s going to work, but nobody’s lying about the death toll. Nobody wants to make this thing look worse than it is. We know how bad it is. If anything, we want it to go away. People are ready to get back there and have their lives go back to normal, but they understand and they’re not willing to do it. If this thing is not under control show, we would have everything going in our favor to lie and pretend it’s better than it is.

So we could get back to normal lying and saying, it’s worse than it is, doesn’t benefit anybody. And this Trump administration wants you to be naive enough to believe that that’s actually the case folks. It’s not the Trump administration is the one lying to you because one, they know their response has been horrific and they know it’s costing them in the polls in two, they want to reopen things before it’s time. They want the economy to go back to normal. And in doing so as their own administration as admitted, they’re putting your life at risk, but they’re trying to downplay that risk by telling you the actual risks are somehow being exaggerated to hurt Donald Trump.