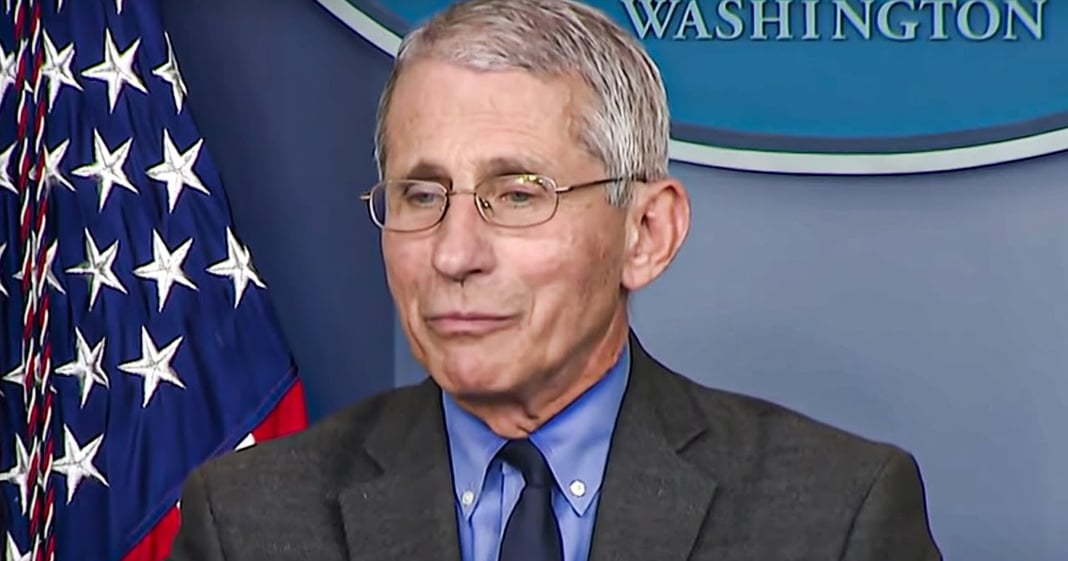 The Trump-supporting duo of Jacob Wohl and Jack Burkman have been busted once again making up fake assault charges against public officials, this time against Dr. Anthony Fauci. A woman has come forward with evidence that the pair paid her to say that Fauci had abused her, and Wohl insisted that it was necessary in order to make Fauci pay for shutting down the country. Ring of Fire’s Farron Cousins explains what’s happening.

A woman by the name of Diana Andrade has come forward saying that two prominent Trump supporters paid her to say that Dr. Anthony Fauci had sexually assaulted her. Now Diana actually used the story of how she was legitimately sexually assaulted, uh, many years ago. But instead of saying that it was that man, she said it was Anthony Fauci. So she was able to tell a realistic story because she had actually been through this experience, just was dishonest about who had done it. And according to her, it’s because Jacob Wohl and his buddy Jack Burkman paid her to say this. Now, Diana Andrade, if I’m pronouncing that correctly, sent materials over to reason magazine, including recordings of phone calls that she had with both Burkman and Wohl where they essentially laid out the scheme. And here’s a couple of quotes from these recordings from Jack Burkman. Uh, let me tell you something, Diana, this guy shut the country down.

He put 40 million people out of work. In a situation like that, you have to make up whatever you have to make up to stop that train. And that’s the way life works. Okay? That’s the way it goes. So you have them admitting like we’re making this up and we’re making this up for a reason. And he continues. This was after she reminded them that, Hey, uh, the coronavirus is a real thing and it’s a dangerous thing and it’s a scary thing. So you know what’s, what’s so bad about having to shut things down for a little bit if it means saving lives and this is how Burkman responded. Mother nature has to clean the barn every so often. How real is it? Who knows? So what if 1% of the population goes, so what if you lose 400,000 people, 200,000 railed. Really the other 200,000 are the bottom of society.

You got to clean out the barn. If it’s real, it’s a positive thing for God’s sake. So here we have yet another group of Trump supporters and other group of Republicans who have proven that they’re not pro-life at all. They’re in fact pro death. Like Burkman literally said that’s a good thing cause that’s the bottom of society. If poor people die, if elderly died, that’s a good thing. According to Jack Burkman. Now, I don’t know if anybody knows about Jack Burkman’s history of Mike Papantonio, ring of fire used to go against them all the time on MSNBC way back in the day. Um, Burkman got himself in a little bit of trouble many, many years ago, uh, stories emerged that he was, you know, soliciting women for a threesome. So look into that a little bit. This guy is a total scumbag, always has been, but he found that even bigger scumbag to pair himself with.

And that’s Jacob Wohl. And as Diana explained in this, uh, communications with reason magazine, she said, I don’t understand how these guys aren’t in jail. You know, they, they, they’ve tried to frame dr Fauci. They tried to frame Elizabeth Warren by bringing out some like hunky Marine who was just like 20, 30 years younger than her saying, yeah, I was in a BDSM relationship with her. And everybody was like, well, hell yeah. Good for Elizabeth Warren. If that’s true, it wasn’t true. And of course he tried to frame Robert Mueller, the pair of these idiots did these two people do not belong in jail? I will say that right now what they do need is to be committed to mental institutions. There’s something wrong with these two individuals and yes it does border on criminal and with what they did with Mueller, um, it likely crossed over into full blown criminal activity.

But there’s something wrong with these two individuals. This kind of behavior cannot be accepted. This kind of behavior cannot be condoned. And yeah, we all laugh about it and it’s funny, but at the end of the day, these men have a mental illness that needs to be addressed before it escalates in something horrendous happens. These men need professional help. These are not funny stories anymore. These are not silly. These are not a couple of wackos out there doing, you know, trying to get attention like the guys from jackass. That’s not what this is. This is two mentally ill individuals who need to be under constant surveillance because their actions are becoming more and more deranged. And I do believe if they continue to go on checked, eventually these men are going to be a danger to themselves and to others.