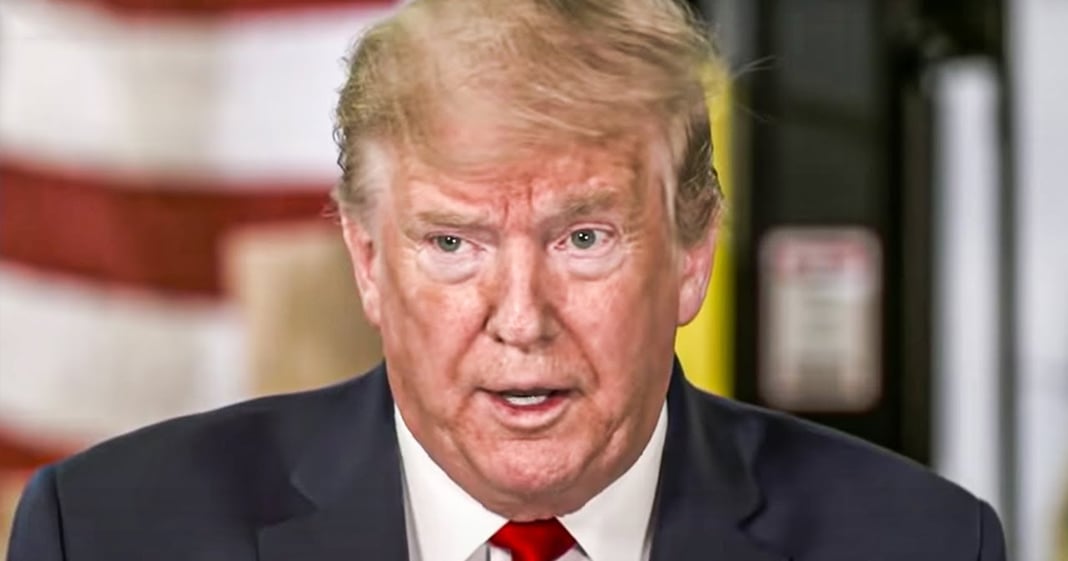 Donald Trump has taken the seemingly bizarre step of blocking the CDC from releasing standard guidelines on how best to reopen state economies. Trump has said repeatedly that he wants to get things running again, so why would he block the CDC from telling us how to do that? The answer is simple: His administration can’t handle the requirements that the CDC is recommending, as Ring of Fire’s Farron Cousins explains.

The centers for disease control has come up with a new set of guidelines that businesses need to follow in order to be able to safely reopen so that we can get this economy up and running again. And unfortunately for some unknown reason, the Trump administration has decided that these guidelines from the CDC will quote, never see the light of day. That is what scientists at the centers for disease control were told when they came out with these new guidelines. Your guidelines will never see the light of day is what these scientists were told. Why we all know we have heard Donald Trump say this, we have seen him tweeted that we got to get the economy running again. We got to open things up, right? You’ve got those angry, uh, conservative mobs out there with their guns saying open things up.

Republican governors saying, well, let’s open things up even though we know people are going to die. And they’ve actually literally said that. Um, Greg Abbott of Texas for example. So the CDC says, okay, y’all want to reopen. Here’s, here’s the things that need to be done. Let’s just do these things and things will be, you know, kind of okay, it’s still not great, but you know what, if you insist on reopening, here’s what you should do. But the Trump administration says, no, no, we’re not. We’re not going to release these. We’re not going to let businesses know what to do. And the reason that they have given for not letting these guidelines go out there to these businesses is because they’re quote too prescriptive, too prescriptive. And what they mean by that, as they explained, was what’s good for rural Tennessee may not necessarily be good for New York city.

You know, how can we apply one size fits all guidelines to every single city in this country when every city is different in unique? Oh, that’s a special thought, isn’t it? We’re all special and unique. Uh, but here’s the thing that these idiots don’t understand. First of all, they understand that they’re lying. They do know that. But, um, let me go ahead and read you some of these guidelines and you tell me if you think that this should apply to both rural Tennessee and New York city. Let’s, let’s just see what some of the guidelines say. Uh, the section on reopening childcare facilities recommends that the facilities avoid plush toys. Uh, make sure each child has their own plate during meal time and stagger, drop off and pick up times for parents.

Now, is that something that we could do in both Tennessee and in New York? I mean, are there different regulations on toys and not sharing plates? And that to me honestly, like that’s what’s kind of scary anyway. Like why do we have to tell these these daycares that the kids can’t share plates? Were they making kids share plates to begin with? That’s not good. That’s an outbreak of anything waiting to happen. Why are we even having to tell them this? That’s, that’s scary. It continues. Uh, the recommendations for restaurants include installing physical barriers such as sneeze guards around host stations and avoiding the use of handheld buzzers to inform waiting patrons that their table is ready. Now, I don’t know about you, but I think those could apply in rural Tennessee or New York city or Pensacola, Florida or San Francisco, California or Denver, Colorado, or literally any other city in the United States of America.

Those are pretty generic. I don’t think they’re over prescriptive at all. But this administration is terrified of those guidelines. Why? Because it sends the message that clearly we’re not ready. This country is not ready to reopen. We have lots of things to do. But to be perfectly honest too, like these recommendations from the CDC, these should not just be put in place to fight from the Corona virus. Um, these should be the new normal. Again, like not having preschool kids share the same plate at meal time. That should just be a thing. We do the sneeze guards. That should be a thing we do. You know the little Xs and lines that they have in in supermarkets now where you can’t like, you gotta wait at the line and not be right up on somebody’s neck. That’s driven me crazy for years. When people do that and you’re trying to put in your pin number anyway, that’s beside the point.

Like that should be standard, the sanitizing of grocery carts, the sanitizing of gym equipment and things like that. Like why are we doing this? How many lives could we save each year? Not just from Corona virus, but from the flu? How many people could we stop from getting the common cold? How many sinus infections could we avoid if we simply cleaned a little, if we simply weren’t right on top of each other while waiting in line to check out at the grocery store? Folks, these are common sense things that this country needs to adopt permanently, but for the Trump administration to be blocking these right now is utter insanity.