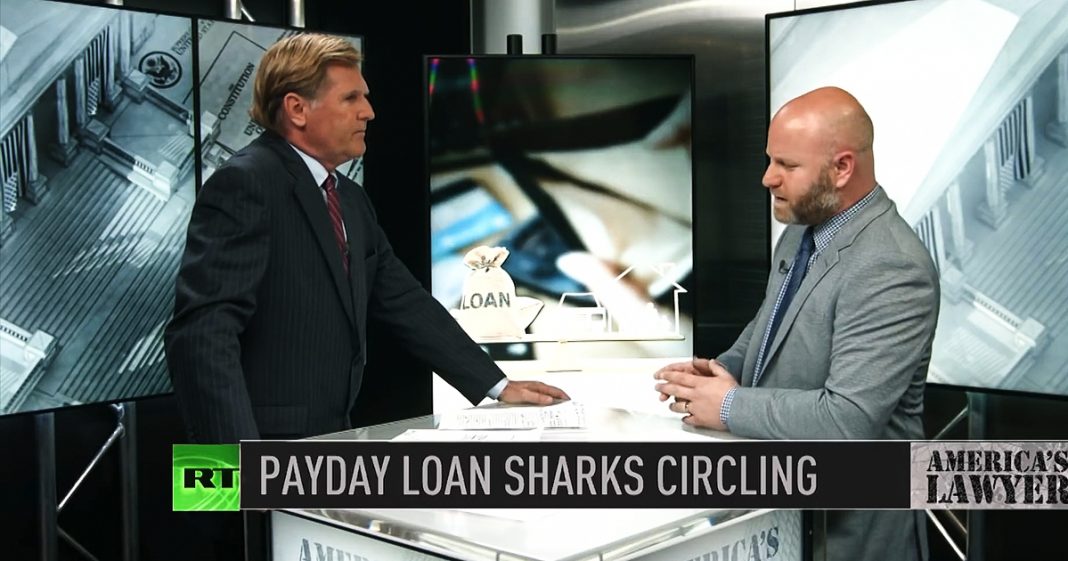 Via America’s Lawyer: Payday lenders charge up to 800% in interest rates amid the pandemic. Mike Papantonio and Farron Cousins discuss.

Mike Papantonio: 30 million Americans have lost their jobs in the past six weeks, and the payday lending industry is taking full advantage of these desperate workers. Wow. It gets crazy. What is it? The, the amount of markups are almost 800% interest rate.

Farron Cousins: Right, right. Just a couple points below 800% but effectively 800% per year for these payday loans. And the problem is, as you just mentioned, 30 million Americans and that number’s going to go up tomorrow, 30 million Americans in six weeks have filed new jobless claims. The real jobless number is much higher than that, but these are the people who have to turn to these payday lenders. And even though banks have lowered interest rates, credit cards have lowered interest rates. The banks actually did a decent thing for once in their existence. Payday lenders said, nope, we’re still going to do a base rate of about 600%. And on the higher risk folks, you’re still at 800%. We know you don’t have a job. We know you can’t pay for anything. And as statistics show, once people take out a payday loan, they get trapped in a seemingly endless debt cycle of having to take out other payday loans to pay off this one, then another one to pay off that one. And they’re trapping young people, they’re trapping minorities, and it’s getting so much worse during the pandemic. And there is no signs of this slowing down. And Congress has done nothing on this.

Mike Papantonio: No, no, Congress.

Mike Papantonio: They have absolutely avoided this topic. The Trump administration has done away, completely done away with the only agency who had the ability to go in and do anything. And when they started, when you saw that agency, the agencies go in and say, you know, this is crazy. We can’t charge 800% under any circumstances. But when the agencies went in, he did away with the agencies.

Mike Papantonio: And then Congress, they were silent. Congress was silent on this idea that it’s okay to spend, to have a company that is charging 800% on a loan.

Farron Cousins: Right, and part of the problem too is, you know, when you go out there and you say, well why hasn’t Congress done anything? A lot of people do respond with, well it really falls under the consumer financial protection bureau’s jurisdiction. Okay, well it used to, but we know they are now useless and that is the point when they refuse to enforce, then Congress does have to step in. But instead you have the Senate that only cares about confirming conservative judges right now and you have the House who nobody even knows where they are. Because Pelosi says you’re not going back to work yet.

Mike Papantonio: Yeah. Where, where is the House?

Farron Cousins: Neither side.

Mike Papantonio: Is Pelosi ever going to call them? Here’s Pelosi’s plan. Don’t bring them back. Spend all this time under this Trump mania, attack Trump mania. It’s, it’s going to kill them. People are always saying, already saying, well, I’m back at work. You know, it’s in a different setting and I, I don’t agree that we all ought to be back at work by the way. But the point being out there in the public, they’re saying, where’s, where’s the House? Farron Cousins, thank you for joining me. Okay.