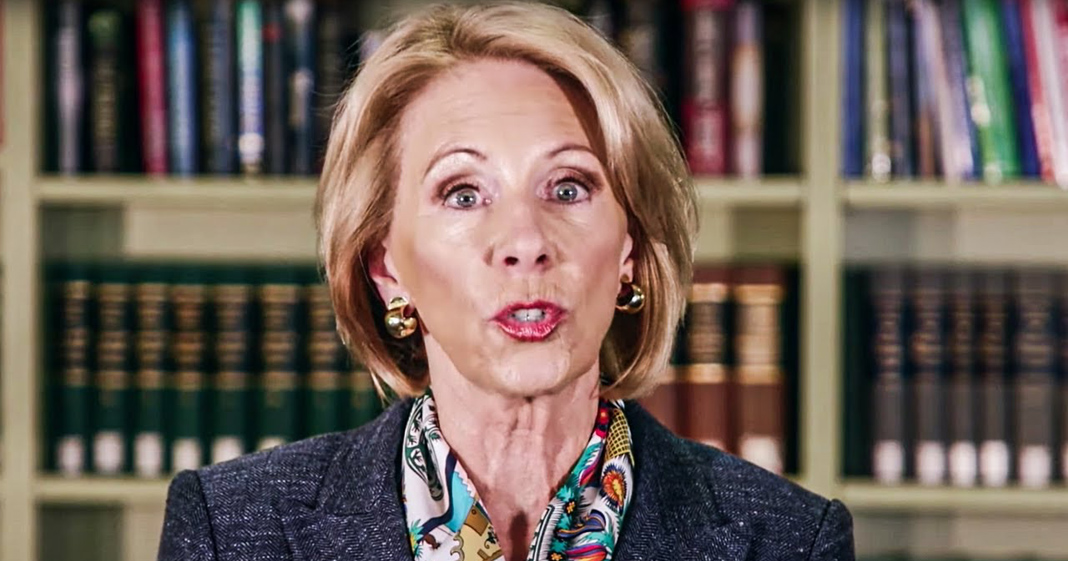 This week, Education Secretary Betsy DeVos made it a lot easier for men to get away with sexual assault on college campuses by changing the Title IX rules that had been put in place by the Obama Administration. Campus assaults have become more frequent in recent years, but after meetings with “Men’s Rights” groups, DeVos decided that victims have too much power. Ring of Fire’s Farron Cousins explains what’s happening.

After several years of trying to screw over sexual assault victims on college campuses, education secretary Betsy DeVos finally succeeded in her plan this week by announcing the new title nine rules. Now rewind the clock a little bit. Back in September of 2017 the very first year of the Trump administration DeVos his first year on the job, what she did in September of 2017 was rolled back Obama era title nine rules that did give more power to the victims of sexual assault on college campuses. It allowed them to make these claims. It gave colleges a more aggressive way to prosecute and investigate claims of sexual assault. Um, in Betsy DeVos wasn’t happy about that because Betsy DeVos for several months had been meeting with quote men’s rights groups who said, this is unfair to us. Women are just going to make up claims all Willy nilly and we’re all just going to go to prison for sexual assaults.

That never happened. And Betsy DeVos, because she is not a smart human being said, you know what? You’re probably right. Let’s just do that. And that’s exactly what happened. So this week after two and a half years, DeVos came out with her new rules and here they are. According to the New York times, the new regulations narrow the definition of sexual harassment and require colleges to hold live hearings during which student victims and perpetrators can be cross examined to challenge their credibility. The rules also limit the complaints that schools are obligated to investigate to only those filed through a formal process and brought to the attention of officials with the authority to take corrective action. Schools will also be responsible for investigating only episode said to have occurred within their programs and activities and they will have the flexibility to choose which evidentiary standard to use to find students responsible for misconduct, preponderance of evidence or clear and convincing evidence to find a school legally culpable for ms handling allegations, they would have to be proven, deliberately indifferent and carrying out mandates to provide support to victims and investigate complaints fairly. So what does all that mean? Well, basically it means that it’s up to the school to determine which kinds of evidence they’re going to allow in. And the school will then decide whether or not that evidence is even worthwhile.

And if the student, the victim believes that the school mishandled the claim, the student is now going to have to prove that the college acted deliberately in differently to the claims and the investigation. Essentially the victim becomes a victim a second time because not only would they be fighting these sexual assault charges, trying to get something to happen on that if they’re sexually assaulted, but then if nothing happens from it, then they have to challenge the school, take the school to court, and then if they win, then they get to take the perpetrator to court. So it’s essentially putting a new legal battle in between the other two legal battle or other legal battles. Two legal battles now for women if they’re sexually assaulted on campus. It also with this a little public hearing allows the victim to have to face the perpetrator in front of a room of non law enforcement people in front of not a court of law.

Now the constitution, as we all know, says, yeah, you have the right to face your accuser in a court of law. You don’t have a right before that. You don’t have the right to confront them in front of non law enforcement officials in front of just college staffers, faculty that that’s that that’s wrong. This is wrong. These standards absolutely will not pass the muster in court and I hope even though these new standards only came out with like 48 hours ago, somebody needs to be working on a legal challenge for this constitution is very clear about when a person is able to face their accuser and it is not when they’re sitting on a college. Sorry, that’s not what the constitution says. Not to mention the fact that these are criminal complaints. Criminal complaints need to go to law enforcement. The college itself should really not have a role in this unless it is determined that the individual was guilty at that point. There then should be an investigation into what the college did or did not do to protect the students. But until guilt is determined, the college shouldn’t be involved at all at all.

But DeVos wants to hand over that law enforcement judge and jury power to a random team of faculty members at a college. This is going to end badly. Women are going to suffer for this decision, and many of them, as I explained in that little scenario, are unfortunately going to end up suffering twice.