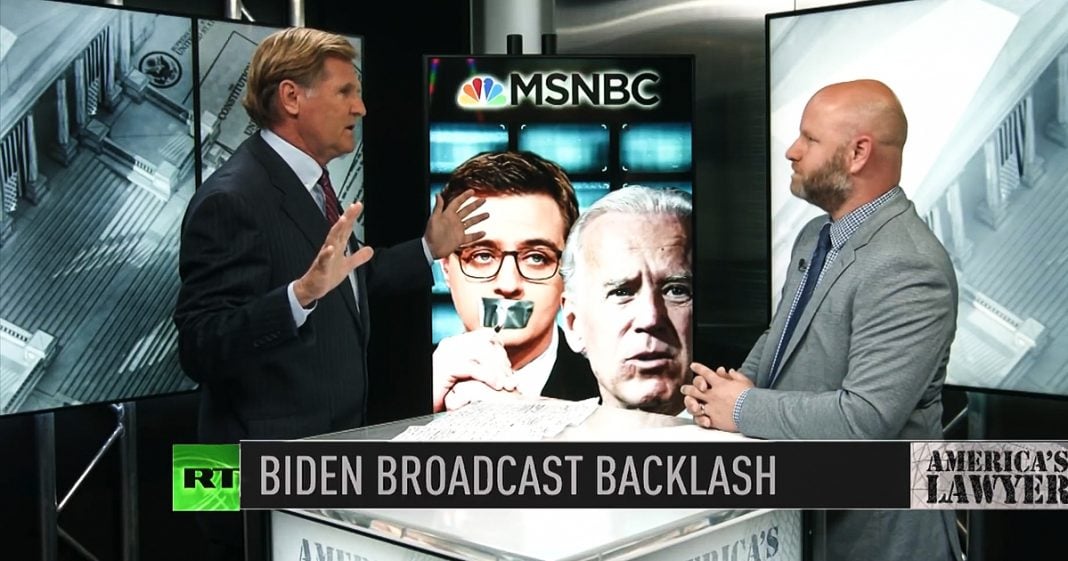 Mike Papantonio: He just brought up the topic and these numskulls that are the real problem. These people are just, I don’t, sometimes I think about what goes on in their head. What, I get this, this Trump hatred syndrome that it makes them crazy. They hate Trump so much that they do stupid stuff like this. This kid goes on the air, he just talks about Biden. That’s all he did.

Farron Cousins: Right. I mean, look, Chris Hayes is a news of the day program. This has been news of the day for over a month at this point and he finally decided to, just as you said, talk about it, lay out the story. Say this is what we know. This is what has been alleged. This has been Biden’s response or lack of response up to that point and that’s it. That was the extent of the depth of that coverage. He did not say one way or another that Tara Reade is absolutely telling the truth or that she is a liar. None of that.

Farron Cousins: And the audience freaked out because they really, they like to think of themselves as smarter and more well thought out than the Fox news viewers, but when it comes to the tribalism, they are no different.

Mike Papantonio: Yeah. What I love.

Farron Cousins: Their just on the different side.

Mike Papantonio: What I love about it is they like to think of themselves as the enlightened ones, right?

Mike Papantonio: They’re not down in the, you know, they’re not down in the, in the sewer with the other folks, the deplorables, the brain dead, dull brain deplorables as Hillary likes to refer to them. They’re not like that. They’re enlightened. They’re educated. They have good jobs. They’re members, what a joke because when you think about this, it’s like this dull brain disease that they can’t understand. He didn’t even say anything, but MSNBC of course is so tied up with, with Biden, they have this love affair with Biden because of Comcast. Right?

Mike Papantonio: Comcast made a deal with Biden. Don’t mess with us if you become president. Don’t go after, you know, don’t sue us from monopoly. Let us do as much as we want to do as an expansion, so they have this deal. Okay, let’s talk about the bigger story. When we talk about this story, I welcome the critics. I mean, when it goes on Ring of Fire or wherever and the, all the, you know, the numbskulls come in and say, how dare you talk about Biden. He’s our only chance. No, he’s not our only chance. We have time to do something right now. We can get another candidate. It, look, it happens all the time. I think back 1972 Hubert Humphrey, right? Hubert Humphrey wasn’t even in the play, but at the convention, Hubert Humphrey comes up and all of a sudden we have a new candidate in 1972. These idiots that don’t have enough sense. They don’t have enough historical basis. They don’t have enough education. These people who think they’re so enlightened, they don’t even know that history. We don’t need Biden. Get rid of him. Come in with another candidate. But, oh no, we got to have Biden. You know, what is your take? It’s just, it’s infuriating to me. It’s interfering.

Farron Cousins: He knows that.

Farron Cousins: He knows that she couldn’t release that complaint.

Mike Papantonio: It’s a red herring. Just like when I, did you watch the interview with Mika and Joe Biden?

Farron Cousins: I saw clips of that, it was awful.

Mike Papantonio: It was agonizing. I wanted to say, God all mighty Mika, go after this guy, but she can’t and Joe can’t and Chris Hayes can’t and Rachel Maddow can’t and nobody on MSNBC can because Phil Griffin, that little twit that runs MSNBC and Andy Lack that also runs NBC, is telling them, Don’t you dare go after Joe Biden. Look, look at the facts right now. The facts are over whelming and all this defense that I heard from him. Oh, well she, you know her, her story hasn’t changed. If you take a look, this idea, her stories changed. That’s something a defense lawyer does in a trial. A defense lawyer tries to make it sound like, oh, well this witness changed. No, she hasn’t changed her story and she, she talked to people right after the incident. Talked, there’s people that say, yes, she shared with us what happened. Joe Biden in this story, in this storyline is a thug. We need a candidate that can beat Trump.

Mike Papantonio: We don’t need him now and there’s plenty of history to say, abandon him. Go into the convention, let’s get a new candidate.