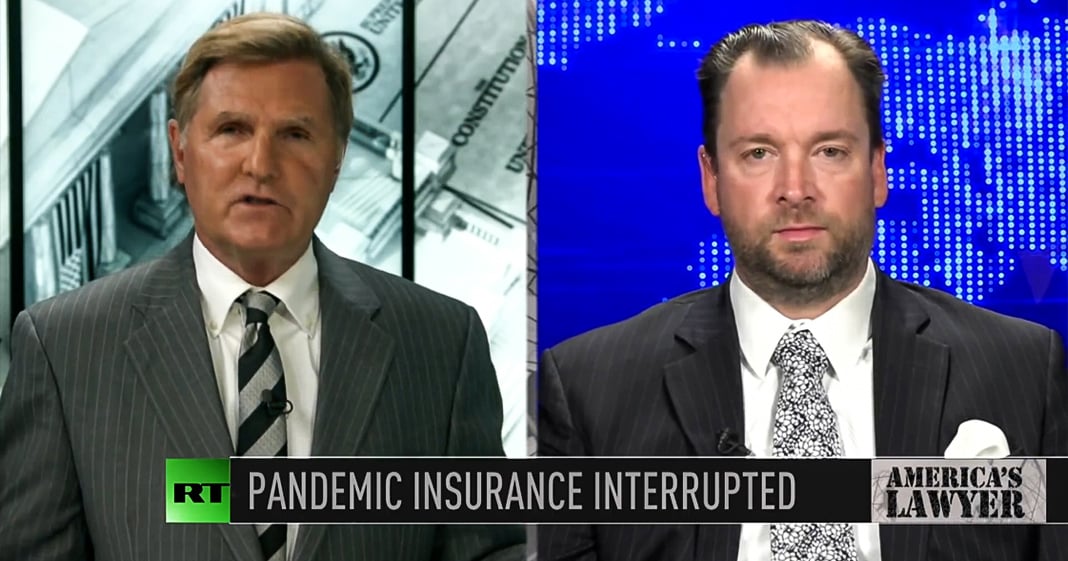 Via America’s Lawyer: Top Class Actions president Scott Hardy joins Mike Papantonio to explain how insurance companies are wiggling their way out of covering swaths of businesses decimated by the pandemic.

Mike Papantonio: Businesses that are suffering from the statewide stay at home orders are quickly learning that their insurance policies aren’t covering the economic slowdown even though they were supposed to. Joining me to talk about this is Scott Hardy, the president of class, top class actions. Scott, you know, you have your pulse on exactly what’s going on around the country. The first time we started getting calls at our law firm where you’d have a business an entire chain business, you know, large chains calling us and saying, we have this business policy and they’re telling us there’s no coverage. And then we look at the policy and there’s clearly coverage, clearly coverage. Tell us what business interruption insurance is and what’s happening with this right now during the shutdown.

Mike Papantonio: Yeah. Okay. So here’s the, here’s what we’re seeing already, and tell me if this is consistent with what you’re seeing out there. We’ll look at a policy and the policy will say, it’ll be, it’ll be all coverage policy. There, there’ll be no question. There’s, they’re not even making exceptions. They’re saying this is an all risk policy. But then they’re telling, they’re telling the folks that make the demand, who’ve been paying outrageous amounts for the insurance companies for decades, they’re telling them, oh no, no, we didn’t mean that. It’s not what it means. You’re going to have to fight it out. We see that and then we see policies where they say that, well, we’re, there is a clause here that says that we’re going to exclude loss for bacteria. We see that a lot. But they don’t put in there bacteria and virus. A virus is a pathogen. It’s very different. The pathogen you should have coverage for and so they have these talking points that they’re telling everybody to discourage them from making these, these types of claims. Are you seeing that same thing?

Scott Hardy: And so, as you said, when you look at these insurance.

Scott Hardy: So when you look at these insurance policies, it’s just like you said, it’s, it’s very cut and dry from, it’s if my business is shut down due to something beyond my control, like a natural disaster, I should have be covered for my expenses to be able to pay my payroll and still have that income come in. So once things are not shut down and things opened back up, I can get paid. But insurance companies after the SARS outbreak and H1N1 tried to add some clauses in there so they wouldn’t have to pay. Which is what you’re talking about there, right?

Mike Papantonio: Yeah, exactly. So what we’re seeing is, always make the assumption for, even if you’ve got a different issue here, if you’re watching this program and you have coverage that they’re denying, understand, there’s a couple of issues that you need to be aware of. One of it, one of them is that the civil authority issue where the civil, where the government has said, you must shut down because of a public health crisis. That should be something that you consider when you make your claim. That should work, it should work to your advantage. The second thing is, is as this, as this litigation develops, you’re going to find that there’s going to be interpretations of these policies that are going to be widely varied. You’re going to have some courts that are going to always rule for the insurance companies. Some that are going to say, look, you know, if I look at this, if I look at this, we just have to find if we weigh everything, we certainly should weigh in favor of the business’s been paying all this money for coverage. What are you telling, what are the attorneys that, that you’re working with, what are they telling people right now, Scott, about how to proceed?

Scott Hardy: They’re saying, submit those claims. Get those denial letters, send those denial letters, send your claim policies into the attorneys. They need to review those because just like you said, there’s going to be a lot of different ways that they’re attacking this. You know, and the insurance companies are sitting there and saying, hey, we can’t afford to pay out all these claims. But in 2018 they took in $1.2 trillion in payments and after paying all their operating expenses, paying on all the claims, these insurance companies still cleared a $60 billion profit in 2018. So how can they not have money to pay these small business owners that are trying to get 50,000 bucks, $25,000 just to stay open?

Mike Papantonio: Yeah, yeah. We’ve got. Right. We have to go. But I’ll tell you this, we saw the same thing with hurricane loss. We saw the same thing with BP loss here on the, on the Gulf coast. It’s the same game they play all the time. Don’t give up. If you have a policy, do not give up. Hire an attorney who knows what they’re talking about, who will jump in and fight for you. Thanks for, thanks for joining me, Scott. Okay.

Scott Hardy: Thank you for your time, Pap. I appreciate it.