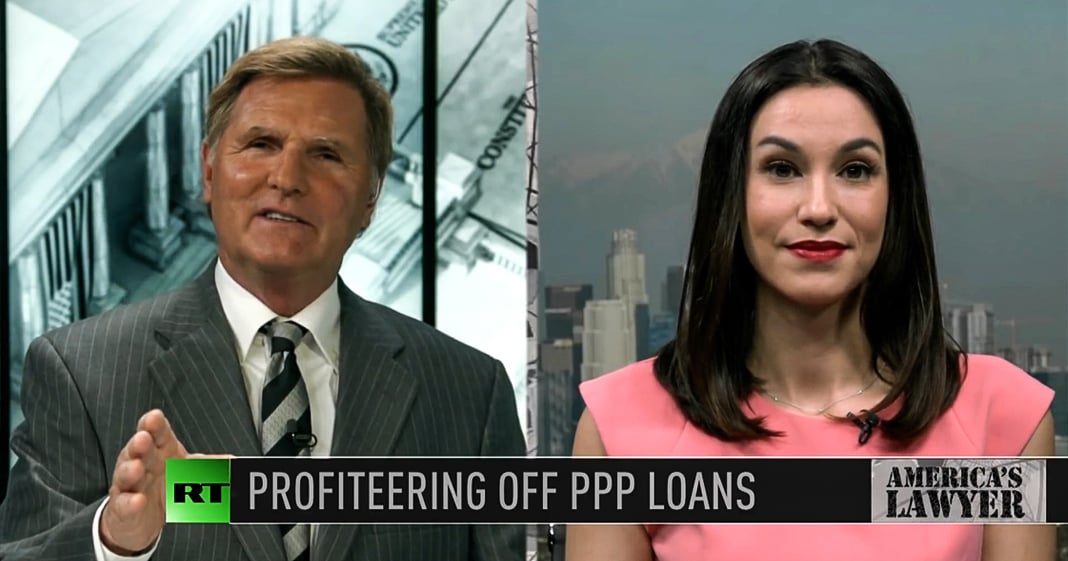 Via America’s Lawyer: RT correspondent Brigida Santos joins Mike Papantonio to outline lawsuits against big banks like Wells Fargo who have been doling out business loans to their wealthier clients rather than smaller businesses who the federal funds were intended for.

Mike Papantonio: Four of America’s largest banks have been sued in federal court over their mishandling of loans under the government’s paycheck protection program. RT’s Brigida Santos joins me now to talk about this. Brigida, which banks are being sued and, and what are the allegations that are being made against them?

Brigida Santos: The banks that are being sued are Wells Fargo, JP Morgan Chase, US Bank, and Bank of America. They’re being sued by a group of small business owners for allegedly approving paycheck protection program loans for wealthier clients before processing those forgivable stimulus loan applications for less lucrative businesses. Now the small business administration, which is administering this program, requires banks to process applications on a first come first serve basis. But the true small business owners say that they didn’t get that chance and they weren’t given a fair chance to apply. And by the time that their applications actually got through, the money had already run out because it was already allocated to those bigger customers. Some banks also even reportedly denied applications from borrowers who had never worked with those banks before.

Mike Papantonio: You know, when I see the names, Wells Fargo and Bank of America, you know there’s something hinky going on. I mean, it’s almost, I’ve been doing this for so many years and I’ve seen the same thing play out time and time with the same banks and so there’s no surprise here. But what it is obviously is has to do with collecting higher fees, doesn’t it? Banks collect higher fees for larger loans and because of that, they’re the ones that get all the attention. Isn’t that kind of what’s happening? It’s all for-profit ignoring the intent of this legislation totally.

Brigida Santos: That’s exactly it. They’ve got to try to make a profit, these banks. It’s not a secret that each borrower pays processing fees based on the amount of their loan and banks obviously earn more money by giving out those larger loans. Reports from the small business administration reveal that applications were approved three days earlier for borrowers seeking over $150,000 in loans, which does back up the plaintiff’s argument that smaller businesses were initially ignored. The plaintiffs are now seeking class action status with the lawsuits and they’re likely going to achieve that because so many people were left high and dry.

Mike Papantonio: You know what’s so bothersome about this Brigida, is both Democrats and Republicans knew this was going to happen. I mean, there’s no question they knew this was going to happen. As a matter of fact. There’s an indication they anticipated was going to happen. They could have done something that put a priority payment on it. They knew the people making these loans were going to gouge as much money as they possibly could. They knew it was, all they had to do is look at the history of Wells Fargo. Look at the history of JP. Look at the history of Bank of America. They, they knew what was going on ahead of time. President Trump and Congress has, have agreed on a new funding package to provide even more money to small businesses, but with banks playing favorites, don’t you think we’ve seen enough? And it’s time for them to legislate and say no more and actually do what the intent of this type of money giveaway should be for. What, what is your take on that?

Brigida Santos: Yeah, of course. And unfortunately I don’t think anything’s going to change with this new round because at the end of the day, while the SBA outlined those first come first serve policies for the forgivable loans, it also gave banks a pretty long leash in determining which loans to approve. You know, many wealthy businesses and people have good personal relationships with their financial institutions. They’re classified in different tiers based on how much money they actually have in the bank, like gold, silver, platinum. So once they get to those higher tiers, they absolutely expect that concierge treatment at all times, especially during a pandemic. And the entire stimulus process highlights and magnifies just how bad economic inequality is in America.

The government gives millions of dollars in CARES act funding to wealthy, publicly traded businesses, and even private institutions that don’t need the money like Harvard, while leaving so many people who truly need that money out in the cold. And as you said, this was done by design. You know, some of the wording in the bill actually says a small business is defined as a company that has 500 or fewer employees per location. So if you have a big corporation that has different locations, that’s one loophole and that’s how a lot of these businesses are getting around that. And all the Democrats had to do, if they really wanted to push back against the Republicans, was to change that verbiage. But of course they’re hand in hand here.

Mike Papantonio: Yeah, it’s the same talk we hear coming out of Schumer, out of Pelosi, that we’re, we’re there for you. We know what the Democrat, what the Republicans do. It’s predictable. We kinda know what they’re going to do. But you know, we kind of want to have to hold out hope sometime for the Democrats and this is just another example of the futility of that. Thank you for joining me. Okay.