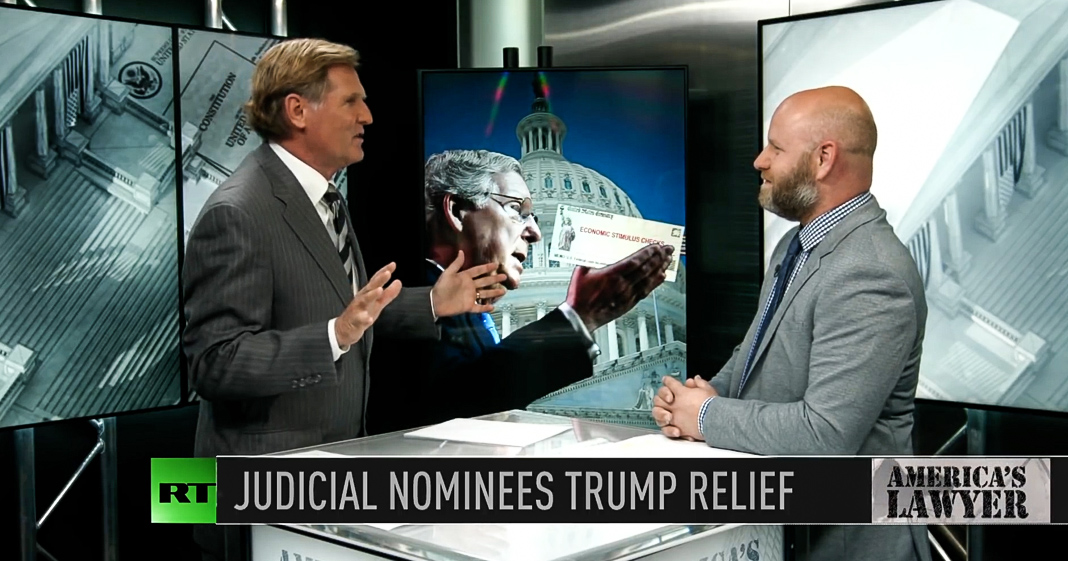 Mike Papantonio: Mitch McConnell says he won’t be working on any more relief packages and instead he’s back on focus on getting corporate judges approved for lifetime appointments. Wow. This is so, this is so bothersome on so many levels. Okay. Let me begin with something you and I’ve already talked about. I know this is a topic you love, Nancy Pelosi caves. Absolutely, just absolutely caves in the last, the last negotiation with, with Mitch McConnell and she’s thinking, well, I’ll get it the next time. The next package that we do on COVID relief, I’m going to build in all of these things I’ve promised my constituents I’m going to build in because she totally caved on this one. Well, it wasn’t she caved, she got out hustled by Mitch McConnell. How do you get out hustled by the turtle man? You tell me.

Farron Cousins: Well, Mitch McConnell, you know, he had worked with Pelosi and Schumer and even Mnuchin was in on these and you know, they, they wouldn’t let the Democrats get anything they wanted in the legislation, which would have included, according to what Democrats say they wanted, more money for American workers. Instead, all it did was it replenished some of the money corporations had taken out of the small business loan program. It gave some money to hospitals, which is nice. Certainly nowhere near enough and then that was it. But Democrats thought, okay, well don’t worry, Mitch McConnell says he’s going to come back on May 4th. He, Senate’s back in session, we’re going to work with him, we’re going to get this thing and Mitch McConnell, the day after they passed this piece of legislation, he tells Hugh Hewitt, he says, no, we’re, I’m done. We’re done with. I’m not, what are they talking about? I’m not doing another piece of legislation. My only priority is conservative judges and that’s always been his priority he said.

Mike Papantonio: I got to tell you, an interview somebody sent me, people know we do this and they send me interviews. I know you get the same thing. This is an interview with Jake, Jake Tapper and, and Nancy Pelosi. And so, so Jake, almost like, he’s like a forlorn child. He looks like a child talking to mama. That’s what this looks like. So Tapper’s asking her, well, why did you give up so much? Why did you do this? And oh, calm down. It was like, Jake, you’re an idiot. Calm down, hush. I have this under control. Well, the truth is she doesn’t have it under control. She’s already been outmaneuvered by the Republicans on this and there’s nothing. I mean, again, how do you get outmaneuvered by the turtle? How is it that you just say, oh yeah, I’m just gonna I’ll wait until the next time. There’s not going to be a next time. Or if it is, it’s going to be a long time from now. Right?

Farron Cousins: Right, and that’s exactly what Mitch McConnell has been doing every single time. And, and it is shocking that these Democrats are getting outflanked by Mitch McConnell. But even Schumer himself, we had talked about this maybe 18 months ago, Schumer cut a deal with McConnell in the Senate because they wanted to go on their winter break at the time. And he said, I’ll let you fast track 13 different judges, but we need to adjourn. It’s Christmas break. Let us go home.

Farron Cousins: So. Yeah. He made the deal to fast track judges from this point forward and Mitch McConnell has taken full advantage of it because Chuck Schumer is worse than useless at this point.

Mike Papantonio: Chuck Schumer has been worse than useless for a very long time.

Mike Papantonio: That’s why we both had hope with Bernie. We thought, okay, maybe Bernie can bring some new life to this, you know, a progressive movement. It’s a disaster and this is a great example of that disaster.