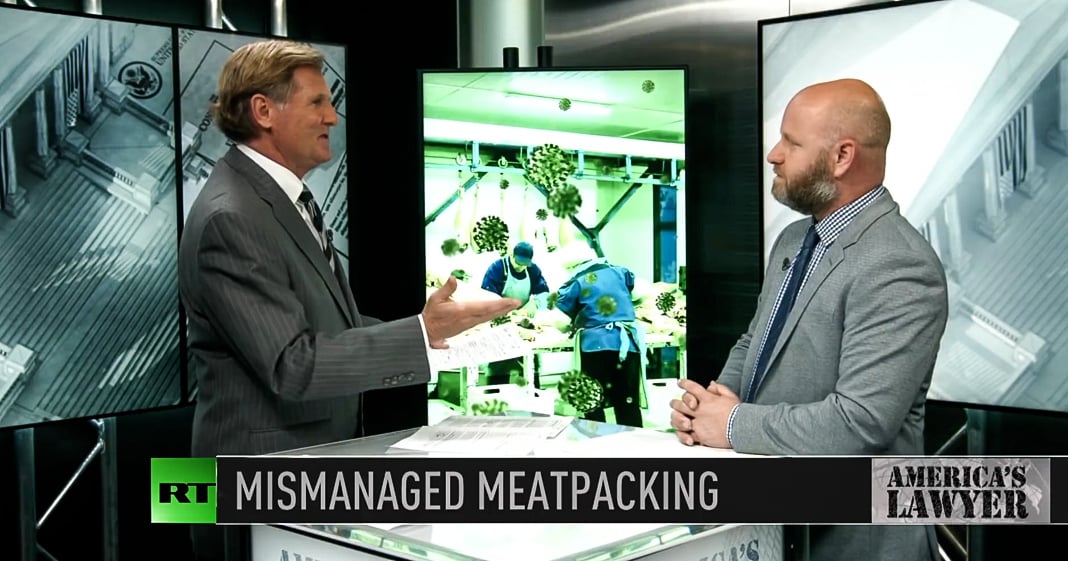 Via America’s Lawyer: As meat processing plants nationwide are shutting down due to surging stockpiles of goods and fears of contamination, news has surfaced of employees at Smithfield and Tyson’s plants being forced to work without proper protective gear. Mike Papantonio and Farron Cousins discuss.

Mike Papantonio: Huge clusters of workers have become sick with COVID-19 at meat processing plants in the United States because some of the largest corporate food processors failed to implement any kind of safety precautions for workers. Joining me to talk about this is Farron Cousins, editor of the trial lawyer magazine. You know, as I look at this story, worst yet as I look at the graphics here. I don’t want to eat meat. But, you know, this story really, I think we’re going to survive even without meat for awhile. People have alternative protein. But the thing that bothers me about this is it just got so little attention. You know, these workers were going in without any protection. They’re, they’re working four feet apart, basically no protection at all. The sound is so loud in there that to talk, they have to get face to face, ear to ear, whatever. It just screamed out for problems, especially when people started leaving and not coming back because they couldn’t come back. They were sick.

Farron Cousins: Right, and one of the things we’re finding out now too is that the management at many of these plants, Tyson foods, JBS foods, and Smithfield actually encouraged workers, even if you’re sick, you still have to come in. We’re a vital part of the economy, a vital part of the food chain, they said. So even if you’re sick, if you’re showing symptoms, we still want you to come in. One employee described it as unless you were in a casket, they expected you to show up to work the next day.

Mike Papantonio: Yeah. It was their, they call it their work, their work while sick policy.

Mike Papantonio: They actually had a policy, the work while sick policy. You know, I can’t, I can’t avoid the irony here. This is crazy. Smithfield as you know, the biggest meat packer in the, maybe in the world is owned by the Chinese doing business right here in the United States. So Smithfield probably had some of the worst policies across the board and Smithfield of all of them had every reason to know very early something was getting to, getting ready to happen. But they provided no masks. They provided no gloves. They provided no separation because they just, I guess they look at these people as being expendable, thousands of these people working in the same plant.

Farron Cousins: Right, and they do view them as expendable. I mean, we’ve seen this, you know, for, for all kinds of different corporations. The workers come and go, you know, if somebody drops dead on the assembly line, you simply replace that person. You know, it goes back to the old asbestos memo, if you’ve had a great life working in asbestos why not die from it.

Farron Cousins: And that corporate mentality has not changed in over a hundred years at this point. So what we’ve had with these workers, in addition to being told, come in sick, we had the, the businesses themselves, Smithfield, JBS, Tyson told the federal government told OSHA, okay, we’re going to implement these new standards. And the new standards are you have to wear a mask, you have to do the social distancing and then according to the workers, it took weeks after they promised OSHA everything was going to be okay before the masks showed up. It took weeks before they were actually told to distance themselves from one another at least six feet. So the corporation tries to tell the government, listen, we’re doing everything right. We’ve made these new policies. But the workers are saying, they may have told you they made these policies, but they never implemented them until of course it was too late. They didn’t get their masks at many of these plants it told about a week and a half ago.

Mike Papantonio: Yeah. So right now, more than 3000 of them are sick. The workers are sick. More than 20 are dead. And so the, the point is this, it’s worker’s compensation. You see, that’s different from being able to sue the corporation. That worker, their only relief generally is going to be through workers’ compensation. So a, a corporation can make an assessment. How much does this worker compensation, how much it’s going to cost us if we lose Joe over here because he’s got coronavirus? They, you know, they do the, they do the math and when they do the math they say, well we’re going to do a lot better just business as usual. Joe’s not going to be that expensive because it’s worker’s compensation. No big deal.

Farron Cousins: Well, and you’ve got the Trump administration right now and Mitch McConnell, as of yesterday morning, announced he was going to be working on this as well, trying to come up with some kind of immunity for corporations so that when they have outbreaks like this, you can’t sue them at all. And what that’s gonna lead to is that’s going to lead to even fewer safety precautions. They’re going to think, well, we don’t have to protect our workers because we’re immune now. It’s going to be this horrid slippery slope of mass infection.