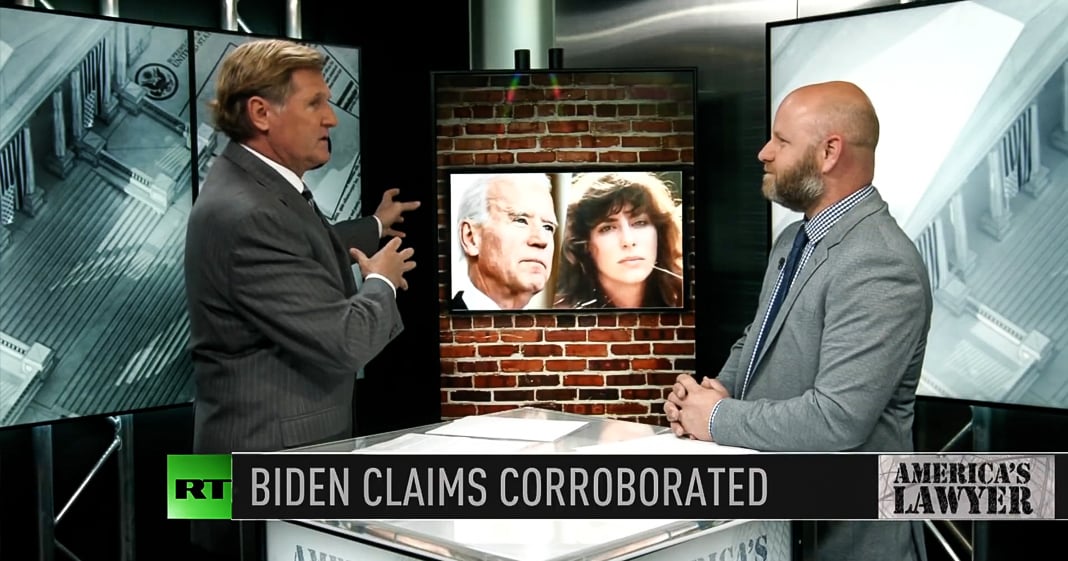 Mike Papantonio: Look, the Tara Reade story is threatening to take down Biden’s campaign, but the media is still refusing to talk about it. Why? Why? Okay, so we know here are the, give me the facts that just came out this week. We know that she told her story to her neighbor contemporaneously with when it happened. She told the next people who hired her to also be a staffer about it and that person had to assure her that kind of thing doesn’t go along with this politician. The, the Larry King. So give me your take on this. What, what is it with the me too movement? What is it with progressives that are so idiotic and tribal in the way they see the world? That we’re going to treat this woman differently with this over, look, if I was in trial with this facts there’s no question I would win the trial, but the CNN won’t even report the story.

Farron Cousins: Right, and CNN in fact actually went back through their archives and they deleted, removed that old Larry King tape from their archives online. So you can’t even get it anymore if you didn’t already have it. So CNN is actively trying to protect Joe Biden for whatever reason it is. That makes no sense either.

Mike Papantonio: But here’s what we’re going to hear. This is what we hear all the time. Oh, well don’t you want him instead of Trump?

Mike Papantonio: How many bad, we do bad stories on Trump all the time, but we got to call balls and strikes. Have you, it’s not only that, it’s almost like the guy’s cracking up. I’ve said this before and I’ll say it again. I don’t think he will make it to the election. I really don’t. The last ad that I saw was, it wasn’t an ad. It was a video where his wife is doing all the talking and he’s looking at the, he’s looking at the camera like he’s got brain damage. And so, so why, why are we protecting this man that we know, we know did this? There is zero question in my mind he did this. With these facts any jury would come back and say, yeah, come on Joe and this, this wasn’t a minor issue. He penetrated her. He penetrated her with his hand, reached down her skirt and penetrated her and then said, oh, well, I thought you really liked me when she pushed him off. I mean, how do we say that’s okay? It’s not okay for Trump and it’s not okay for this cat.

Farron Cousins: Well, and that’s what people don’t understand either. Well, wouldn’t you rather have this than Trump? The answer is why do we even have to choose between one or the other?

Farron Cousins: We had a much better option before the establishment came out and made sure that Biden got it. There are other parties that are not Democrat or Republican that are running candidates, hopefully about to pick some better candidates than what they’ve got. But this is not our only option and that’s the trap most people fall into. It’s either Democrat or Republican. It doesn’t have to be. We can absolutely.

Mike Papantonio: But, you don’t think Obama knew this?

Farron Cousins: Oh, absolutely, he had to of.

Mike Papantonio: You don’t think Obama knew that? How long did it take Obama, this is the guy he’s been with him eight years. Obama knows the guy that theres, he knows the guy has dementia and he knows this stuff is existing, but at the end of the day, he pushes Bernie out of the way, Obama and the DNC. He makes his telephone calls, we have to stop Bernie. He’s going to kill our party and now we’re left with this knucklehead. That’s where we are right now. And that’s the DNC at work again, right?

Farron Cousins: Oh, 100% we’ve known this, but the big problem with this story for Joe Biden is that even the people who say, well, isn’t Biden better? They’re now in light of all the new facts that have come out in the last five days, they’re now also saying, well, listen, her story does follow the same other stories we’ve seen in the past that all turned out to be credible. The telling of friends, the telling of parents, the telling of neighbors, all of those people coming together to corroborate this story almost verbatim from what Tara Reade said. Even the doubters have said that is what typically does happen in these situations.

Farron Cousins: I don’t watch them either, but I haven’t, I haven’t seen people posting clips. That’s not to say maybe there, maybe they are. Maybe there aren’t. But I’m not seeing it through the social media that I go through and I follow a wide range of people on social media.

Mike Papantonio: Okay, here’s my point, here’s my point. We’re, we’re at a crossroads right now. We have a chance to do something. There’s an entire movement. I’m not sure who’s behind the movement, but it is to stop Biden, that’s it.

Mike Papantonio: You know, stop Biden. Let’s get somebody else in there that, that has a chance. But, you know, your theory has been that the Republicans have known about this for a long time. They’ve, they’ve, they’ve held it back. They’re going to launch it later. Right? So you’re telling me this point, CNN went out of their way to make the story disappear, at least on their, in their venue. Is that?

Farron Cousins: Right, they’ve deleted it from, from their archives and so that also shows that they knew, CNN knew they had this right. They may have forgotten about it, but there were people at CNN who knew this existed. They knew right where it was. They knew how to get rid of it in a pinch, and that’s exactly what they did. So maybe, maybe CNN was the one planning on releasing this later down the road.

Farron Cousins: I don’t think that at all, but.

Mike Papantonio: No, CNN has a love affair with the DNC, that Zucker guy they should have gotten.

Farron Cousins: But it makes no sense, because CNN, the only reason they’re still alive today is because people tune in to see a stupid thing Trump said. They get rid of Trump, they’re going to lose half of their already horrible ratings at CNN. So that’s a lose lose situation on their side. But again, Biden, he’s the merger guy, you know, a big corporate guy, so he’s going to take care of their parent companies.

Mike Papantonio: The whole, well with MSNBC of course, it’s the Comcast story.

Mike Papantonio: They love MSNBC, loves him because Comcast loves him because he’s going to make sure that there’s no, that they don’t mess around with the monopoly that Comcast is, is building and Joe Biden made his promise. He says, I’m not going to let that happen.

Farron Cousins: Right. Yeah, nothing will fundamentally change was Biden’s words, but this is a real story. This is a credible story, and if Biden doesn’t.

Mike Papantonio: We’re going to talk about it, I can tell you.

Mike Papantonio: I, I invite the knucklehead tribal progressive’s who don’t understand how bad this is. That we’re looking, like the Milano. What’s her name?

Mike Papantonio: Alyssa Milano. Can you imagine? This, this woman goes after everybody on this and stay silent about this. What does it do to the me too movement? I think it had some credibility problems, and it’s going to get worse if they don’t come out and talk about it.