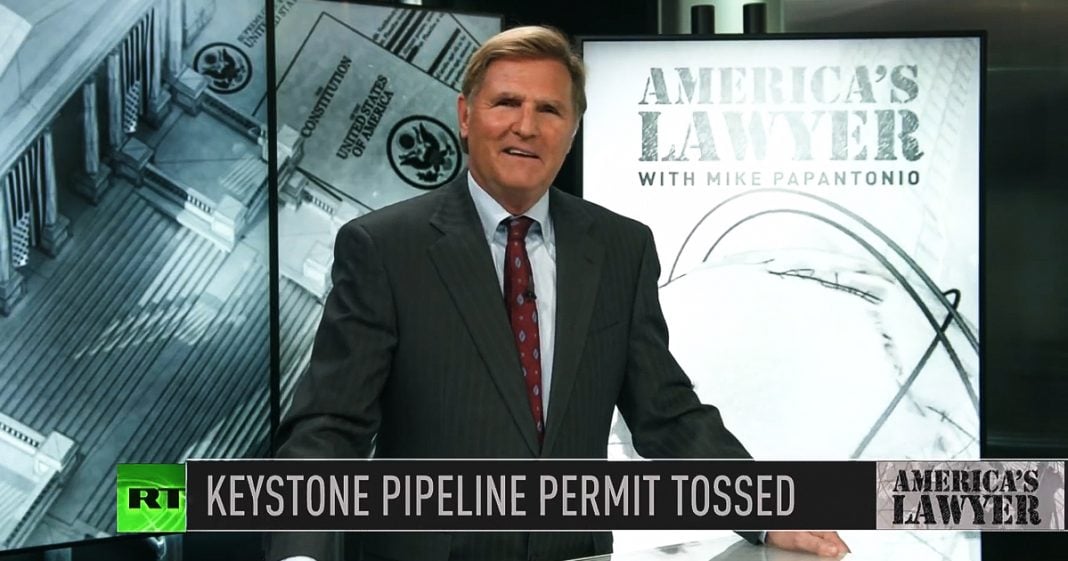 Via America’s Lawyer: A federal judge last week ruled that the permit for the Keystone XL pipeline was wrongly issued and therefore the permit is not valid. Mike Papantonio explains more.

Finally tonight, some good news. A federal judge last week ruled that the permit for the Keystone XL pipeline was wrongly issued and therefore the permit is not valid. This is a major win for the environment and for activists who’ve been fighting against the pipeline for years. In his ruling, judge Brian Morris said that the US Corps of Engineers failed to do a proper environmental review of the project, which is a violation of the law. The reason the environmental review was not properly conducted by the government is because it would show without a doubt that this pipeline is going to cause more harm than good. Proponents of the pipeline have argued for years that it’s necessary so that we can lower energy prices for Americans. But the truth is that this pipeline is going to stretch from Canada to the Gulf coast where the oil would be loaded onto oil tankers and shipped overseas, not for us, but for other people. The United States would assume all of the environmental risk while reaping zero benefit from the increased pollution. This pipeline is a bad deal for both the environment and for American consumers, and the sooner the whole thing is put to rest, the better.

That’s all for tonight. Find us on Twitter, at Facebook @facebook.com/rtamericaslawyer. You can watch all RT America programs on Direct TV, Channel 321 and also stream them live on your YouTube and be sure, check out this new portable app that RT has put together where you can watch virtually anything that’s on the air. I’m Mike Papantonio, and this is America’s Lawyer, where every week we tell you the stories that corporate media is not, they’re ordered not to tell the story because of their political contacts or because of their advertisers. We’re going to tell those stories anyway. Have a great night.