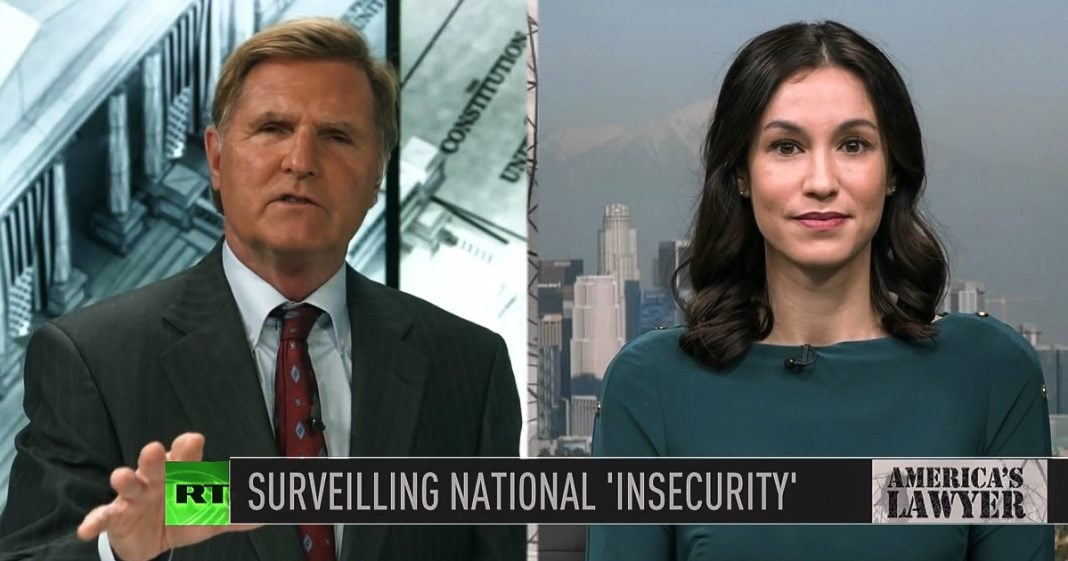 Via America’s Lawyer: Mike Papantonio is joined by RT Correspondent, Brigida Santos, to talk about a lawsuit brought forth by Twitter against the FBI and DOJ that has concluded that the federal government is free to demand consumer data from the social media giant and others via National Security Letters.

Mike Papantonio: A judge has rejected a Twitter lawsuit against the US government that sought to inform the public about federal surveillance requests. RT’s Brigida Santos joins me now to talk about this story. Brigida, I’ve been pulling, you know, I’ve really been pulling for these folks. I’m not a huge, I never, I don’t even tweet. I’m not a Twitter person. I think might be because, you know, Donald ran me off from even being interested. But what can you tell me about the lawsuit? What happened here?

Brigida Santos: Look, this was first filed by Twitter in 2014 against the Obama era government, but it has since been amended to challenge the government under president Donald Trump. The social media giant sued because it had wanted to include information about the number of surveillance requests it receives from the federal government every year as part of its public transparency reports. The requests which are known as national security letters, however, are designed to be withheld from the public. So a federal judge in California after six years has now dismissed the case handing a victory to the federal government.

Mike Papantonio: No surprises here. You know, I’d like to know more about the appointment of the judge and what their pedigree is, but I probably could guess. What does this mean for the public? Are they going to ever learn about the government spying? I mean, they at least have a right to know. Yeah, you’ve been spying on me and at least let us know that that happened. That’s, that’s probably not going to happen though, is it?

Brigida Santos: No, it’s probably not. And the federal government can now continue to completely ban companies, not only from saying anything about government surveillance requests, but even that they have been doing them in the first place. National security letters are law enforcement tools that are similar to subpoenas and they’re most commonly issued by the FBI. However, other agencies can also issue them. NSL’s force companies to turn over information about certain customers for national security related investigations.

But there’s no way for companies to even know whether the government is legally doing this or whether they’re violating the law with these requests. So these companies are now forbidden from disclosing how many requests they’ve received or that they’ve received any in the first place. All we know is that the federal government has issued over 300,000 NSL’s in the past 10 years. We don’t know where they were issued or what they were issued for.

Mike Papantonio: Yeah. We try to call balls and strikes on this show as much as possible and, you know, people get mad at us because we’re not tribal and we don’t have one position. So the balls and strikes in this, in this situation is the other side of the story is when we compare how we have been able to suppress terrorist activity United States because of this type of spying. It’s nothing less than spying. That’s what it is. That that when we compare ourselves to Europe and Asia and other parts of the world, we have done far, far superior. And when you build in this, this is the, the argument is this is part of the reason.

But the empirical data is we have done far, far better than the rest of the world and so we hear that argument. Whether it’s accurate or not, I don’t know. But the argument is certainly out there. If you compare apples to apples, yes, we’re doing far better. As far as the first amendment goes, is this a violation of the first amendment? I don’t know how it could not be, but tell me what your opinion is.

Brigida Santos: Yeah, I think that it is. But unfortunately, by citing national security concerns, the government can always find a loophole for warrantless extra judicial surveillance and in this case, Twitter says the government was infringing on its rights to free speech by preventing it from publicly posting information and forcing it to engage in speech that’s been preapproved by the government. But this goes deeper because the government often passes that from these social media companies then down to consumers and users by basically forcing us to squash our own speech. And when we talk about social media, they’re also collecting massive amounts of data on people.

So they’re also doing their own form of corporate spying. And while the government can’t legally squash free speech, of course, unless it’s given it this loophole of national security, private companies can squash that free speech. They are free to do that and the government, as I said, often does pressure social media companies to do that. You know, silencing certain stories or voices and that often happens. And of course this is a bipartisan policy, one of America’s policies where both parties seem to agree. It spans multiple administrations. Mass surveillance, this is just the next chapter.

Mike Papantonio: Yeah, well the companies, you know, whether it’s Facebook or Twitter or whoever, you know, they’d benefit from it. They get, they get a lot of benefit from the federal government and breaks that the federal government gives them and the federal government has always has that hammer over their head. If you don’t do this, then we’re going to do this and so that’s always there. It’s a reality. They’re terrified that they’re going to lose a dollar. So, I really loved seeing Twitter take this position, but it’s no surprise to see a federal judge shoot it down because truthfully, he probably, they probably were on good grounds. When it comes down to the first amendment argument versus police power of federal government, health, safety and welfare. Health, safety and welfare is going to Trump something like the first amendment most of the time. Look, thank you for joining me. Okay. Stay safe out there in LA.

Brigida Santos: You too, Mike. Thanks.