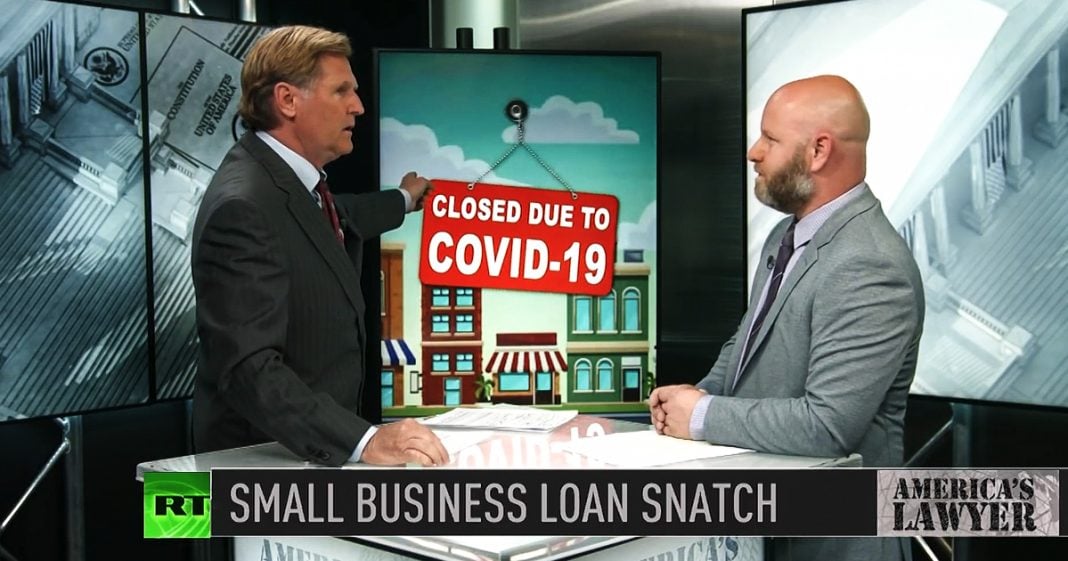 Via America’s Lawyer: Large corporations have been quick to deplete federal funding that was supposed to go toward keeping small businesses afloat. Mike Papantonio and Farron Cousins discuss.

Mike Papantonio: The small business loan program contained in the stimulus bill has already run out of money, partly because large corporations were able to exploit loopholes to get their hands on this money. Wow. Ugly story. I mean, we’re talking about giving money to investment bankers. That’s what this is, that’s what this is about.

Farron Cousins: Yeah, it really is. And of course, obviously we’ve all seen the stories over the last few days with these major restaurant chains, Shake Shack, Ruth’s Chris getting their hands on tens of millions of dollars. Shake Shack, of course, they gave back their 10 million. They said, oh, I’m so sorry.

Mike Papantonio: But I did love that.

Farron Cousins: I mean, it’s great that they did that, but they only did it because people got furious. If nobody had paid attention, Shake Shack would have loved to have the $10 million.

Mike Papantonio: Ruth’s Chris, $20 million, they didn’t give it back.

Farron Cousins: No, they’re keeping theirs.

Mike Papantonio: You got all kinds of big corporations here that aren’t giving that money back. So, you know, if you compare it to what Shake Shack did, I don’t know. I don’t have any interest in Shake Shack, but I love they gave the $10 million back.

Farron Cousins: Well, but the problem is the way, again, this was written allowed these major firms, which includes a lot of hedge funds to come in there and say, well technically I’m a small business. Yes I control $16 billion in assets, but I meet your criteria. I don’t have 500 employees. I don’t technically own these assets that I’m controlling. So you need to give me a small business loan because golly gee, I don’t know if I’m going to make it off my $16 billion. And they give them the loans.

Farron Cousins: I mean, we’re talking about 75 publicly traded companies at this point have gotten small business loans. These are Wall Street firms.

Mike Papantonio: Billion, multibillion dollar wall street, silk stocking, elite thugs really. And so, the people that, I thought this was interesting, the people who advise these investment bankers, there’s something called Acacia. Okay. All these investment bankers, they go to these consultants and they say, what should we do? Give us the idea. What do you think the trend is? Acacia says, whatever you do, whatever you do, do not take this money. Right?

Farron Cousins: It’s wonderful advice and actually quite rather shocking that they would go as far as to say that. But again, they know their clients. They know what these people will do. They know these people only care about money. And if you can get $20 million at 1% interest, they’re going to take that loan all day long. Meanwhile, as you mentioned, $350 billion gone. This was supposed to help mom and pop businesses. You know, the little pizza shop around the corner, the boutique selling athletic clothes down the street. Those were the places that needed this money. They needed it to survive and pay their employees and they can’t get it because Ruth’s Chris wanted it.

Mike Papantonio: Let me get back to this issue because it’s, it’s unnerving to me. Okay. I don’t know, I don’t know who has gone out of their way to try to advise the DNC more than you have. You know, obviously they don’t listen.

Mike Papantonio: So now what, what is the image of what we see with this whole Pelosi thing? The deal with her ice cream freezer and she has seven, five or seven Democrat senators saying, don’t you see what’s happening here? Won’t you please make a move to support small business? She is completely, utterly tone deaf to what the average American. What person gets in front of a $50,000 refrigerator or freezer and says, hey, let me talk to you about the economy? I’ve got about 30 seconds.

Farron Cousins: Well, it’s really interesting here because not only are we seeing all the weaknesses that Pelosi has as a leader, but we’re, once again seeing the Democrats are absolutely the worst group of humans on this planet when it comes to messaging. They could have been in front of this. They could have won the issue, but there are so few good ones left that you could count them on two hands. Even if you were missing a few fingers.

Mike Papantonio: They are blind followers, just like we’ve seen with Republicans for so many, for so many decades. They are blind, goofy followers who rather than thinking for themselves, look to this has been Pelosi to say, what do we do?

Farron Cousins: And they’re terrified of the ice cream lady.

Mike Papantonio: They’re, they are terrified of the ice cream lady, which is totally beyond me. I don’t get it. Farron Cousins, thank you for joining me. Okay.