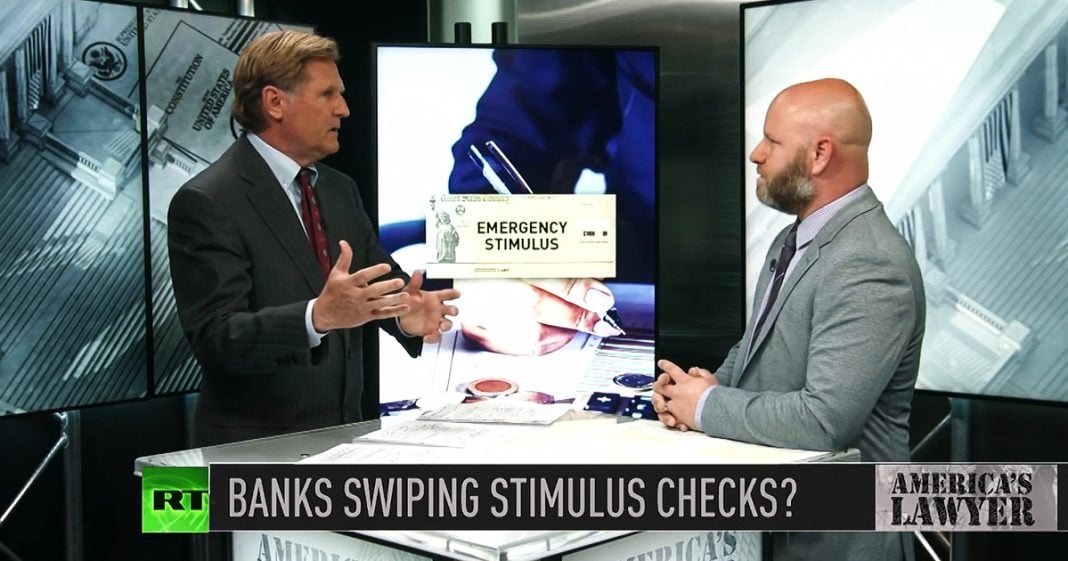 Via America’s Lawyer: Provisions in the Coronavirus relief bill allow for banks and private lenders to snatch stimulus checks from people with outstanding loans. Mike Papantonio and Farron Cousins discuss.

Mike Papantonio: Millions of Americans are struggling to get their stimulus checks, but even if they can get through the IRS website, they could still have banks steal their money. Joining me to talk about this is Farron Cousins, editor of the national trial lawyer magazine. This, this story again, it’s no surprise, right? This whole little, the whole nature of this legislation was to put money in hands of people so they could eat. So they could pay their rent. Now all of a sudden we see the threat of banks saying what?

Farron Cousins: Well, the banks are saying, hey, you have overdraft fees from a couple of years ago. Oh, you’re behind on this payment that, you know, this debt that we hold for you, we’re going to steal your money. And the worst part about this is not just the fact that the banks are doing this, it’s that this was intentional. This was intentionally put into this piece of legislation because they wrote in a provision, Congress did as part of the stimulus package here, that the federal government cannot seize any of this if you owe the government any money with the exception of child support. But they didn’t include that provision for banks. Instead, the rule says we’re going to leave it up to the treasury run by Steve Mnuchin, the banker. He’ll decide if banks are allowed to take your money and of course Mnuchin did the very predictable thing, which was to say, absolutely banks, if somebody owes you money, this stimulus check is going right into their account at your bank. You can go ahead and keep it. That is what they explicitly told the banks, Ronda Kent.

Mike Papantonio: Exactly. Let me give you the backstory a little bit more. Treasury department is having this massive webinar telephone conference with banks all over the, all over the US and they say, by the way, is it okay if we take this money that comes to us, the $1,200 check, and if they owe us money on overcharges, or they owe us money on delinquent payment on a loan that we can take that money and then real cutesy, she says, well, you know, there’s nothing explicit that says you can’t. In other words, you’re right. They understood this when they went into it. Mnuchin understands that he’s looking out for the banks. The whole concept of this is A, put money in hands of people who have to pay for things like food and rent or whatever they might, their needs. B, what that does is it empowers the economy. Okay. You got what, $350 billion worth of money flowing through here? Is that this?

Farron Cousins: This was the half billion.

Mike Papantonio: The half billion.

Farron Cousins: So it’s about half a billion.

Mike Papantonio: So, the money’s flowing through and the notion of it is brilliant for the first time because it is saying we don’t really want to worry about trickle down. Trickle down doesn’t work. It’s a lie. When a corporation gets their money, they buy their shares back, none of that money goes into the economy. And now maybe they’ve embraced the notion because they’ve been forced to that trickle up makes a lot more sense. If you put hand, money in the hands of somebody who’s going to go buy something, really is going to engage with the economy. That’s what boosts the economy. Not these folks at the top, this corporate elite at the top. They don’t, they’re not gonna buy anything. They, you know, how many Bentleys can they have? I mean, how many shares can they own in their corporation? So, the point is this actually had a good idea behind it. The idea was empower the bottom, let them pay for food, let them pay for rent or whatever, and that money trickles back into the economy. Right?

Farron Cousins: Right. It’s great in theory. Unfortunately, Congress wrote this legislation in a way that prevents that theory from ever becoming a reality. And here’s the kicker too. You had three wonderful senators. You had Elizabeth Warren, Sherrod Brown, Sheldon Whitehouse, they all, before this decision was made to let the banks take your money, they all petitioned the treasury department. They said, please make the right decision here. Which if they knew anything about this treasury department, about Steve Mnuchin, they knew this wasn’t going to happen. But the fact that they had to petition and beg them to not make this decision shows that they knew this was in there and they knew that it would lead to this and that’s what people need to focus on here. Steve Mnuchin was completely predictable, but what we had in this legislation written by Democrats written by Republicans, written in part by Mnuchin himself, is that it was designed this way. They made it to where the banks can do this.

Mike Papantonio: So it really comes down to starve people, but make sure that that overcharge at the bank is paid. That’s how ugly this is. There’s another, another ugly part to it and I, I love this part. First of all, let me throw out the Pelosi issue. I got to do that. Yesterday Pelosi is asked by five, she’s asked the question, did you know that you have Democrats, five, six, seven Democrats that are saying, please don’t hold up the business loan, the small business loan issue. And now what’s happened is she’s put herself in a position to where it’s now she’s the focus. The Democrats are the focus of the bad guy. Give me, I got about a minute. Tell me, tell me that part of the story.

Farron Cousins: Well, what’s happening at this moment is that yeah, Democrats are trying to get some concessions from the Republican side and these are extremely weak concessions. They include the extension of COBRA benefits so that we can still pay insurance companies.

Farron Cousins: But people don’t have to pay for a month or two or whatever it is. But they have put themselves in a position, Pelosi has as the leader, of trying to make concessions from behind. She’s always behind the curve behind the eight ball, never in front of the issue and playing hardball saying, this is what’s going to happen, and her weaknesses have been exposed and the Trump administration is exploiting this tremendously.

Farron Cousins: Trying to appear human and relatable, but in fact, you’re in front of $48,000 worth of freezers with ice cream that’s $12 a pint, and you think this makes you relatable.