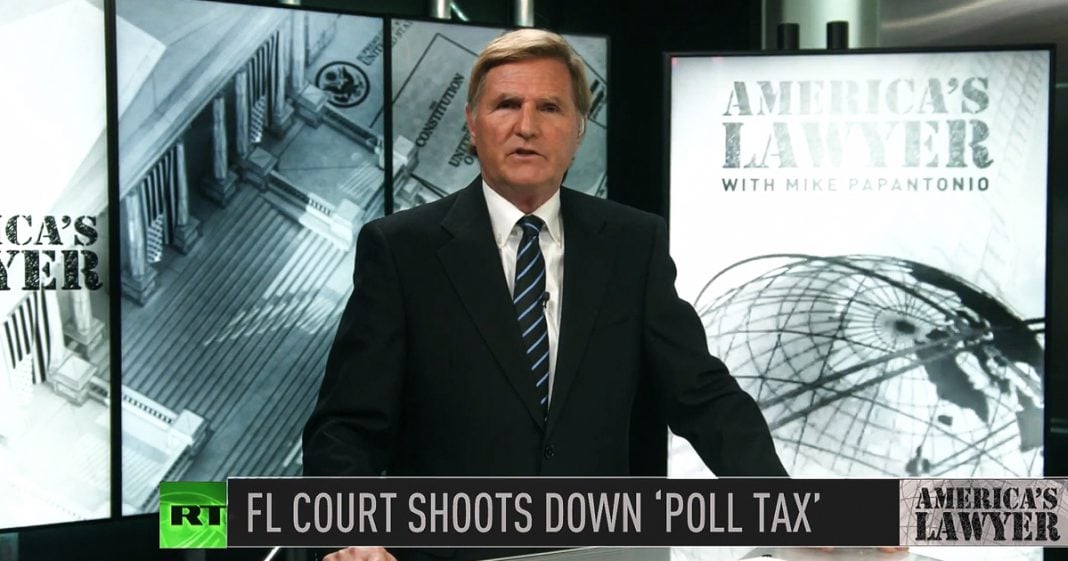 Via America’s Lawyer: A second federal court has ruled that the state of Florida cannot implement what’s been described as a poll tax to prevent former felons from being allowed to register to vote. Mike Papantonio explains more.

Finally tonight, some good news. A second federal court has ruled that the state of Florida cannot implement what’s been described as a poll tax to prevent former felons from being allowed to register to vote. The state government passed a measure last year requiring former felons to pay all of the costs and penalties associated with their incarceration before they can be allowed to register to vote, but the latest federal court ruling put an immediate end to that legislation. This means that the only route left for the state is to take it to the Supreme Court and because of the pandemic, the case has virtually no chance of being argued before the court before the 2020 election. Florida is the most important swing state in the general election and this ruling is going to have a massive impact on the 2020 presidential race. There is no indication that these former felons are going to vote for one party over the other or at all, but they certainly have the potential to change the electorate in Florida, which could likely change the federal government from this point forward.

That’s all for tonight. Find us on Twitter and Facebook at facebook.com/rtamericaslawyer. You can watch all RT America programs on Direct TV, Channel 321 and also stream on live on YouTube, and be sure to check out RT’s new portable app where you can watch any program you want, any of your favorite shows. I’m Mike Papantonio, and this is America’s Lawyer, where every week we’re going to tell you the stories that corporate media is ordered not to tell because their advertisers or the political connections don’t allow them to tell that story. Have a great night.