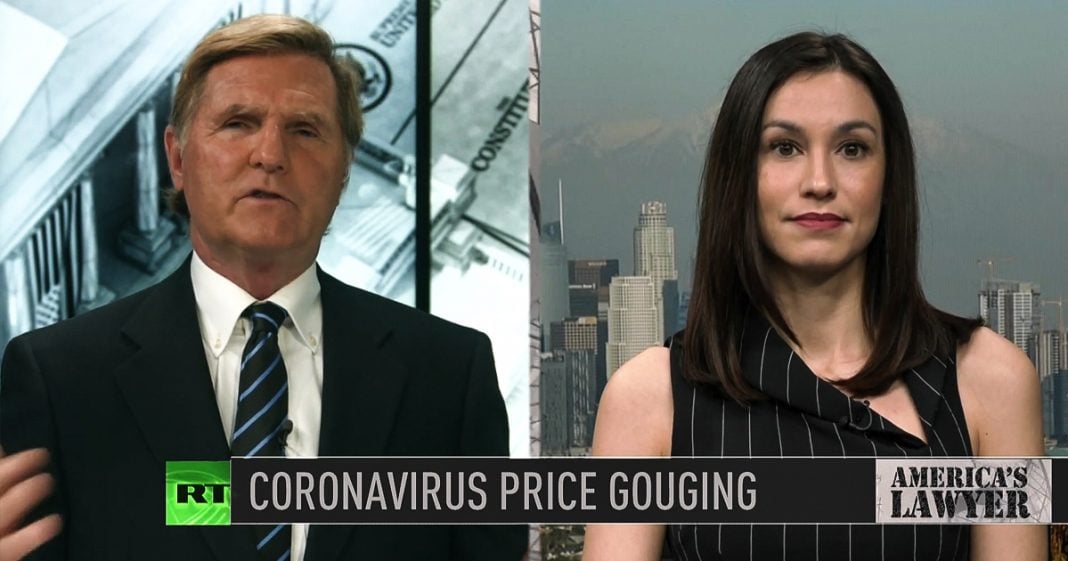 Via America’s Lawyer: RT correspondent Brigida Santos joins Mike Papantonio to explain what lawmakers in Washington are doing to crack down on price gouging of essential medical supplies during the pandemic.

Mike Papantonio: House and Senate Democrats have introduced a bill that’s going to ban price gouging items unreal, that are related to the coronavirus outbreak. RT’s Brigida Santos joins me now with the story. Brigida, what can you tell me about the covid-19 price gouging prevention act that, that is in, is in cycle right now?

Brigida Santos: Democratic leaders have introduced several related bills to prohibit price gouging during national emergencies, which of course includes the covid-19 pandemic. Now the proposed bills would allow the federal trade commission and state attorneys general to crack down on sellers that increase the price of certain consumer goods by more than 10% unless sellers can prove that the increases are outside of their control. Now, there’s currently no federal law prohibiting price gouging, so this aims to help that. Now the announcement comes as thousands of people across the nation file complaints against e-commerce and brick and mortar retailers for selling necessities like toilet paper, masks, hand sanitizers, and even ammunition at exorbitant prices, well beyond that 10% threshold.

Mike Papantonio: Yeah, are state and federal authorities actually investigating the actual complaints? I mean, they, are they on the ground actually trying to see what’s being, what’s being done here? It’s one thing to say we, you know, we’re hearing this anecdotal information, but every time you see one of these stories develop the, you really change things by having the, by having the governmental entity that should be in charge of stopping it, actually sending people out, filing actual complaints, taking them to court. That’s the only thing that really changes the mindset of these greedy gouging sellers, isn’t it?

Brigida Santos: Yes, and the federal trade commission, food and drug administration and state attorneys general are now reportedly ramping up those investigations because there are so many complaints they can’t really ignore it at this point. And some States now even have online portals where consumers can go online and file complaints against sellers in their neighborhoods or online that are taking advantage of people during this crisis. The department of justice has also issued a broad mandate regarding criminal enforcement of these deceptive, fraudulent and predatory practices. Now this is really important because there are shady brokers out there, not only taking advantage of people on a small scale, but also on a mass scale.

Mike Papantonio: Yeah. Can you give me some examples of how these thuggish types are actually taking advantage of people? I’m hearing odds and ends that just sound deplorable. What, what stories do you know about?

Brigida Santos: Sure. I have my own anecdotal stories of going and spending $100 on things like toilet paper and paper towels, but also online platforms. Facebook, Amazon, Craigslist, eBay. People are listing items there for goods at over 300% markup. And then on a large scale you have brokers preying on medical workers. Just in California, the FBI has revealed a major scam by a deceptive broker who was trying to sell a fake stockpile of 39,000,000 N95 masks to local, to a local labor union. Now the FBI caught wind of the deal while trying to see if it could actually intercept those masks and take that stockpile for the federal emergency management agency under the defense production act, which shows how competitive it’s getting out there for these personal protective gear.

Now, healthcare providers, including Kaiser Permanente and Sutter Health, had reportedly already placed orders with that labor union for millions of masks before the deal actually fell apart. So if these bills pass, the goods and services that would be protected under that bill include hand sanitizer, personal protective equipment, other medical supplies, food, cleaning supplies, personal hygiene products and so on. But with so many shortages and rampant competition between international nations, United States and the federal government, many worry that it’s not going to be enough to actually prevent these bad actors from taking advantage of people in need.

Mike Papantonio: Yeah. A $3 or $4 mask that, what it should be is two to three to four. So, it depends. Selling for $12, $15 we get it and they’ve got to do something to stop all that. Brigida, thank you for joining me. Okay.