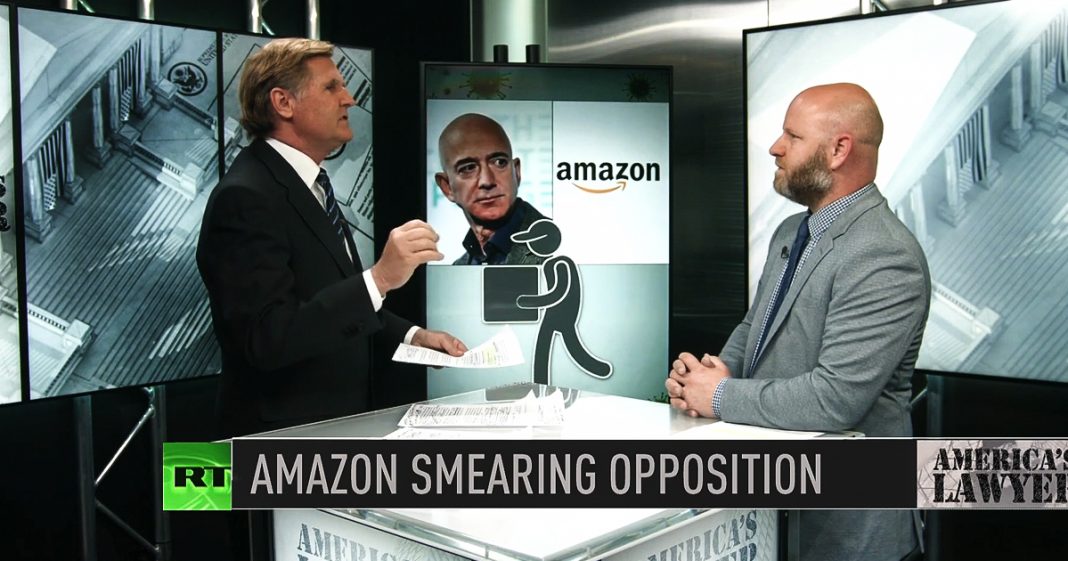 Via America’s Lawyer: Former Amazon warehouse employee Kevin Smalls is alleging the company targeted him in a smear campaign after he requested management be more stringent in sanitation procedures and transparent in disclosing the number of workers infected with Coronavirus. Mike Papantonio and Farron Cousins discuss.

Mike Papantonio: An Amazon worker recently learned that the entire company was planning on launching a smear campaign against him in the media after he tried to form a union. Joining me to talk about this is Farron Cousins, editor of the trial lawyer magazine. No surprise here. When I read this story, I mean, you almost, it’s, it’s, it’s laughable in the sense it looks like Keystone cops here. I mean, lay this story out for us a little bit.

Farron Cousins: Well, what happened was you had an Amazon employee at a Staten Island warehouse, Christian Smalls.

Farron Cousins: And he had been pushing other workers had been working with them trying to form a union. And at the same time they had also been speaking out about the lack of health protections at this particular warehouse. They had planned a walkout a couple Mondays ago and then they fired Christian Smalls. That was the first part of the story that had come out in the media.

Mike Papantonio: Now, didn’t they contact you about a story that you did?

Farron Cousins: They did because I talked about Christian Smalls getting fired for wanting to form a union. Amazon, or at least a PR person, I guess, who was working for Amazon, sends me an email and says, hey, Mr Cousins, you have a lot of misinformation in your segment here. Would you mind retracting this? And here’s the correct information. Now, the correct information was nothing but quotes from Amazon executives and the next day I’m about to do this segment. Just say, listen, I obviously don’t want to get sued here. So here is what Amazon has said in response. But then this story came out where it was revealed that at a recent meeting that Jeff Bezos himself was attending via telephone, they laid out a plan to smear Christian Smalls as an idiot. They wanted to call him stupid. In the media they wanted to say that he was incompetent. He was inarticulate, could barely speak, is how they wanted to paint this man.

Mike Papantonio: Interesting. What they were really trying to do is they want to create him as the figure head.

Mike Papantonio: Because he’s easily attacked, you see. The, as I was reading this story and looking at some of the memos, I see this kind of thing in cases all the time where you have some silk stocking, you know, corporate lawyer who believes that this is still the kind of thing that they can do and get away with. They don’t because ultimately the memos come out. You’re in trial, you’re reading these horrible memos. The, let me read this. This is something that was written in regard to Smalls. This is how they’re trying to go after Smalls. It says, we should spend the first part of our response strongly laying out the case for why the organizer Smalls, why his conduct was immoral, unacceptable, and arguably illegal in detail, and then follow with our usual, our usual talking points about how we care about worker safety. Now this was written, and again, I’m telling you Farron, I see it all the time. These silk stocking disconnected corporate lawyers who have never represented anybody individually in their life. They represent characters like this. Am I, am I just overstating, does this look like a character out of a James Bond movie? You know, but at any rate, look, I, I’m just, I’m, I’m stating that this is playing itself out exactly like you would expect when you let corporate silk stocking lawyers make common sense decisions for how a crisis should go.

Farron Cousins: Well, and these are also the kinds of statements, you know, I’ve watched the videos of your depositions where you flat out read this to the executive who wrote it down and you say, now you know, Mr Amazon or whoever it is here. Did you really say that this man was in competent and articulate and downright stupid? Could you explain that? Can you defend that? And of course they never can, but they always hope it never gets to that point where they never have to be asked those questions. But this is in the ether now and this comes at the same time when Bezos through Amazon said, listen, I’m going to donate $100 million to, to coronavirus relief. Look how good I am and this is what he’s doing behind the scenes.

Mike Papantonio: Okay. But let me pick up on that just a second. Part of the memos that came out where they’re talking about donating strategically.

Mike Papantonio: What they mean is donating strategically is where can we get the most benefit? Do we donate to a politician and put their name on it? Do we donate to a, in other words, it’s not really about, hey, we want to come help. It’s, they want to squeeze every PR dime they can out of everything they do. And it’s a shame because, you know, if they would just leave it alone, if they just do the right thing, which they’re trying to do here, I mean, they’re doing the right thing. This attack on Smalls is ridiculous. It’s going to get worse and it’s going to come out. And I’ll tell you every time, every single case I’ve handled like this, that will evolve into a case at some point, every time I do that, I, I’m, I’m always amazed as I’m in deposition attack, attack attacking in the deposition. And the thing I’m attacking with is what some corporate type has written that says, hey, nobody’s ever going to see this.