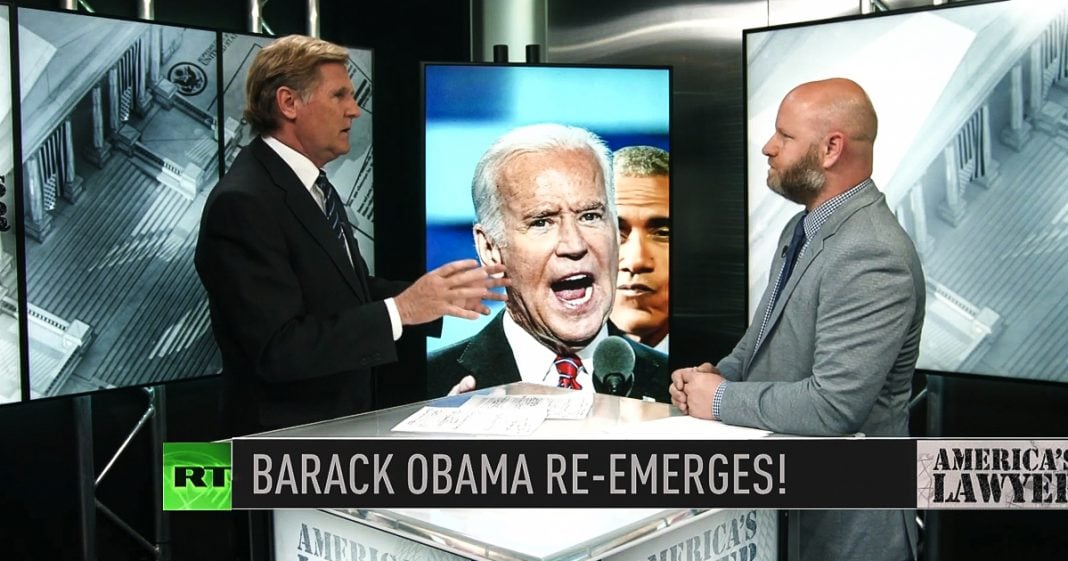 Via America’s Lawyer: With Joe Biden now clearing a pathway to the Democratic presidential nomination, Barack Obama has re-emerged in politics as Biden’s most prominent and influential cheerleader. Mike Papantonio and Farron Cousins discuss.

Mike Papantonio: Now that Joe Biden is the only Democrat left in the race, reports have surfaced detailing how Barack Obama made it happen for his old friend. Now is that a good thing or a bad thing? Now that, you know, first of all, you know Obama we know was making calls to everybody telling them get out of the race, get out of the race. And, but he, he was, he was hiding behind a screen to do that. And so his goal obviously is have the same old guard, the same, you know, the, the Clinton company, the Biden company, the Obama, all of the same DNC establishment, corporate DNC, stay in power because that’s what he was. He was a corporatist, just, you know, just like Bill Clinton before him and, and just like Joe Biden. So what is your take on this? I, I’m a little bothered in the sense that I don’t think it’s going to do him any good. First off, I don’t think the endorsement does him any, any good. If you look at past endorsements.

Farron Cousins: Well, I, I think what this story does is it proves what a lot of the Bernie Sanders supporters and a lot of the Progressive’s had feared since the start of this primary. And that is some kind of shenanigans, whether big or small was going to happen behind the scenes to ensure that Bernie Sanders doesn’t get the nomination. I mean, two months ago we’re talking about Bernie, you know, winning all these States. He is leading in the polls in every single demographic. Then suddenly the day before Super Tuesday, all these massive dropouts, all these big endorsements for Biden, Biden takes Super Tuesday. The rest is history. But now we know, this is from Politico. You know, this is not a liberal organization by any stretch of the magnet imagination. So they are telling us that they have spoken with Obama’s people and they have confirmed that this days before Super Tuesday, Obama’s making phone calls, he’s talking to Buttigieg, he’s talking to Klobuchar and they said he didn’t want to look like he was putting his thumb on the scale, but he was nudging.

Mike Papantonio: Yeah, he was nudging to get rid of Bernie Sanders.

Mike Papantonio: And I, between me and you, I’m really disappointed to hear Bernie Sanders endorsement of, of Biden. Either Bernie was what he said he was. He was, look, we, we, we, we’re progressive. We’re revolutionary in, in our idea about progressive politics and to come in and just say, oh well, it’s almost like I didn’t mean all that. It’s, it’s not the thing I would have advised him to do. The, the truth is, you know, there’s the point that we’re seeing from the other side is the other side is saying, look, we like what we’re seeing here because this is a return of the swamp. The GOP is saying this is the swamp that Trump ran against the first time. Pelosi, Schumer, Biden, Obama, the same players. This is the same swamp that’s coming back. They’re actually jubilant about it and talked about, talk about your projection on the numbers. Right now it’s an even heat. Where was Hillary at this time?

Farron Cousins: Hillary at this point was pretty much digits ahead of Trump and she stayed double digits ahead of Trump until October. That’s when things went South for her. But Biden’s already essentially playing catch up. He doesn’t have a double digit lead on Donald Trump, certainly not nationally, and definitely not in any swing state. So he is already falling behind because what is he doing right now? He’s doing, you know, these pre-packaged videos from his living room where he comes across as not even knowing what’s happening. Sometimes they, they’ve had to bring his wife in there to do 100% of the talking because they don’t even trust him. They know, they know.

Mike Papantonio: They don’t even know if he’ll make it.

Mike Papantonio: They don’t even know if they’ll make it to the general election. I mean, I really.

Farron Cousins: I have doubts myself.

Mike Papantonio: You really sense that. That they’re not even sure he has the health or the mental stamina to make it to the general election. That’s not me talking. I mean that’s, that’s, there’s concern about that. You know, of course when we do a story like this, we have all the, the establishment Democrats, you know, the corporatist Democrats coming after us and saying, how dare you talk about this? Well, we talk about it because you gotta be aware of it.

Mike Papantonio: And when you see a story, well, they’re at an even heat right now. Everybody says, oh good. That means Biden, no, it’s bad. It’s not, it’s not good news. It’s bad news. That’s why when I heard, what’s his Carville come out and say, I mean this is the kind of thing that kills the Dems every time. When Carville comes out and says, oh, Biden doesn’t have to do anything. Did you see this article?

Mike Papantonio: He says he’d doesn’t, he could just stand there and he’s going to win the election. What does that do for this, for this election? It has everybody standing down. This is, this is not a time to stand down.

Farron Cousins: Well, and the polls right now are actually showing that a majority of people in this country do disapprove of Trump’s handling of the coronavirus pandemic. But those same people polled said they would rather have Trump in charge during the pandemic than Biden. So they don’t like what Trump’s doing, but they still think that would be better than what Biden has to offer. That, that’s going to be the poll, watch that poll.

Mike Papantonio: Same thing, Trump just trashing him on economy. So isn’t the point, don’t you focus on where you might be able to win? You certainly don’t stand up like this, like Carville saying, oh well, where, you know, Biden could just stand there and he’s going to win. I don’t know where, you know, Carville’s in LA LA land and anybody giving that idea out right now is really doing a disservice to this process.