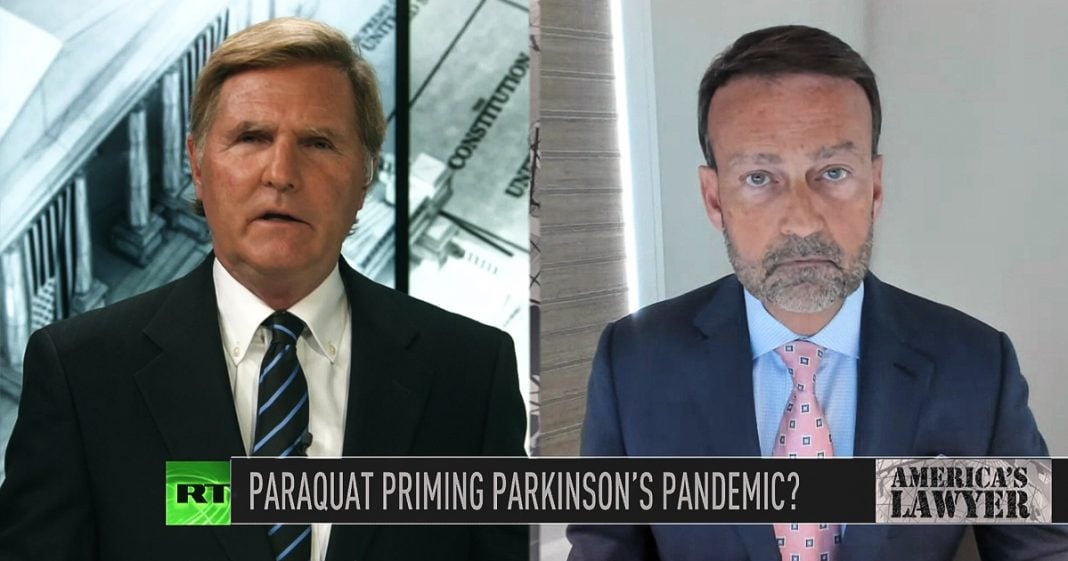 Via America’s Lawyer: Mike Papantonio is joined by Attorney Greg Coleman to describe how the popular herbicide Paraquat has been linked to Parkinson’s Disease, which he warns could soon plague agricultural workers.

Mike Papantonio: A popular herbicide called Paraquat has been linked to dangerous and permanent health problems including Parkinson’s disease and chronic lung disease. This herbicide has been used for decades in the United States, while other countries have banned it because it’s so toxic. Joining me to talk about this is attorney Greg Coleman, who is in the middle of this litigation. Greg, let’s start with the basics. How long has this herbicide been used and who makes it and what are the health problems we’re seeing from it?

Greg Coleman: Well, thanks Mike. Yes, this is, as you indicated, a, a problem that’s been going on for years with what’s called Paraquat dichloride and it’s sold under the brand name Gramoxone. Now, Gramoxone has been sold since 1962. It was originally manufactured by Chevron and then since about 1986 in addition, Syngenta and Growmark had begun manufacturing the product. It’s been sold throughout the US and unlike other European countries, for example, 32 countries have banned this product because of its dangerous toxic levels. The US still allows the use of it for commercial and related application.

Mike Papantonio: Well we know, don’t we Greg, that the companies have known about the health issues for a very long time. Their own clinical data connected it up with, with, with absolute connection to aberrational DNA problems, cancer. And now we’re seeing for 20 years we’ve been seeing this issue about Parkinson’s disease develop more and more where we now know that par, that Paraquat will, does have relationship to Parkinson’s disease. So what, at what point does the company say, you know, enough? We’ve got 32 comp, countries around some of them third world countries, that have banned the use of this product. But we’re still using in the United States. At what point do they say we got to move on from this? They won’t, will they? They’ll squeeze every dime out of it won’t they?

Greg Coleman: No, Mike, we know how this works. Right? The companies are still making money. Why else would they be doing it? Especially when it’s been proven to have such dangerous health defects. For example, you mentioned how long it’s been known. There’ve been studies, for example, the 2009 Parkinson Institute study, which provided a relationship, a causal connection, if you will, between the chemical exposure of Paraquat with many different occupations, primarily among those agricultural workers. Then you have other articles. Again, we’re not talking about the peanuts comic strip here. We’re talking about the national institute of health, who published what was called the farming and movement evaluation study, or the acronym FAME, which established that people who use Paraquat listen to this, Mike, are a 250% more likely to develop Parkinson’s than nonusers. And remember that circle is not just those who use the product, it’s those who are exposed to the product. Well, that could be your family, that could be neighbors, that could be those that are close enough in proximity to the area because we all know it’s, it’s in the air, it’s in the ambient atmosphere, and it can spread in that fashion.

Mike Papantonio: Well, let me just give you some examples. There’s, there’s a, there’s an over-spray problem that we saw with the, the whole ugly, ugly saga with, with Roundup. This is Roundup on steroids. I mean, I, I’ve, I handled the Roundup, I’m, I’m handling the Roundup case. This is Roundup on steroids because of the elements that we’re, that we’re seeing where there’s a connection between it obliterating DNA, changing the formation of DNA, cancer relationships, attacking the liver, attacking the kidneys, attacking the lungs. Now we know there’s neurological data. At what point do we have politicians say no more? It won’t happen, will it? Because this com, these companies are just too big and, you know, they’re too big to fail so to speak.

Greg Coleman: Well, think about it like this too as well, Mike. We know since Roundup was uncovered, obviously that’s an ongoing case, although there has been reported by the news, there is some developments going on there, but Paraquat in a lot of cases has been used to sort of bridge any gap from the lack of use, if you will, of Roundup because of what’s been going on legally. But here’s the thing, Mike, Paraquat has been shown to be even more toxic than Roundup, than glyphosate, which of course was the herbicide or the chemical involved in Roundup. And in fact, you mentioned what the legislation is going to do or what should it do. In, in March of 2016, the EPA, our environmental protection agency, expressed its intent to pursue risk mitigation measures for Paraquat after evaluation, after evaluating some of the incident data, including a large body of epidemiological data. And this is what they found. They found that absolutely, there was a connection. Then in July of 2009.

Mike Papantonio: Yeah. Greg, we’re short on time, but I want to tell you, we’ll get you back on as this case, as, as you develop this case further. It’s an important one. Thank you for being out there talking about it because it doesn’t seem like there’s a lot of people talking.

Mike Papantonio: Certainly the media is not talking about it, again. Thank you for joining me. Okay.

Greg Coleman: Thank you so much.