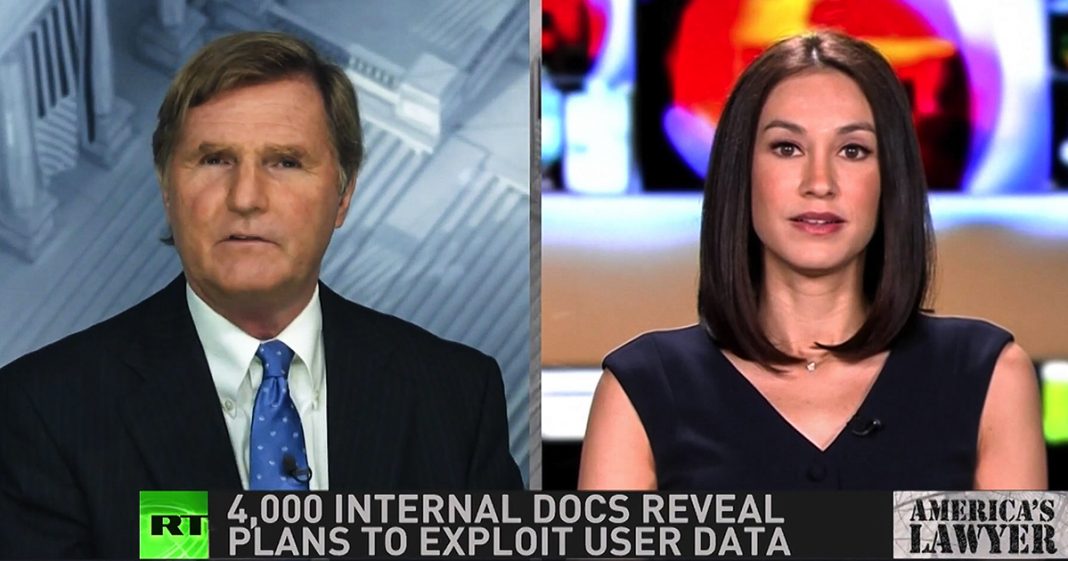 Via America’s Lawyer: The Department of Interior has rolled back protections that were put in place for offshore drilling operations after the Deepwater Horizon disaster. Mike Papantonio and Farron Cousins discuss. Plus, RT’s Brigida Santos joins Mike Papantonio to walk us through leaked documents from Facebook that explicitly outline plans to leverage user information when doing business with third-party app developers.

Mike Papantonio: The Department of Interior has rolled back protections that were put in place for offshore drilling operations after the Deepwater Horizon disaster. It sets us up for another disaster in the future, doesn’t it Farron? I mean there’s no, this isn’t even a close call. What they’ve done is everything that went wrong with the Deepwater Horizon right here along the Gulf Coast, all over destroyed ecosystems completely. Some of these ecosystems have not returned. They can’t return. They’re, they’re, they’re permanently, they’re permanently put out of, out of whack. There’s no way you can get the balance back in, into balance. And so, so now we know exactly what happened. You had contractors, not government that were supposed to be overseeing, right?

Farron Cousins: Right and, and in some instances, we also know back in the Deepwater Horizon days, they were filling out their safety inspections in pencil and then they would give them to the federal government who would then fill them back in with pen. The Deepwater Horizon obviously is an issue, you and I know way too much about almost.

Farron Cousins: Exactly and I was writing on it for, for years and years. But what they’ve done here is essentially it’s like they took a list of everything bad that happened with Deepwater Horizon and said, oh, those look like they would make good rules. So now, yes, the government doesn’t have to be the one to inspect your rig. The government does not have to verify that you have things like a blowout preventer in place to prevent another Deepwater Horizon. You can go longer between inspections now and you have these oil industry groups, American Petroleum Institute out there heralding this as some kind of great win because apparently the regulations saying, hey, we need to make sure you don’t explode and kill people and destroy an ecosystem that was too cumbersome for these oil companies. And, and the API, they’re celebrating this as a, as if they just won the lottery because to them they did.

Mike Papantonio: Yeah. Okay. So the argument is that Trump is trying to develop energy dominance, worldwide energy dominance. His idea is to say, and the, the industry of course is arguing, you know, Mr President, you can’t do that unless you let us do what we want to do. And that is to break whatever rule we want to break. To operate without any kind of oversight. To operate without any kind of regulatory involvement. That’s why if you do that, then we’re going to be okay. And the rest of the sentence is, and they, they, the, the American public never gets this. Just because they get the oil right off shore in the Gulf of Mexico doesn’t mean we get the oil.

Mike Papantonio: They take the oil and they put it in these, they put it on these, these huge ships and they wait to see what’s happening with prices around the world. So if the yen is looking, they can sell more, you know, people that are dealing with yen, they go and sell it to the folks with the yen. And so the problem is the American public buys into that argument that, yeah, we’re solving the, the energy dominance issue and that’s going to be good for us. It doesn’t have anything to do with the price at the pump.

Farron Cousins: Right. You know, during the Obama years, domestic oil production reached an all time high, even more so than under George W. Bush. And so Trump has come along and his administration wants to increase that all time high. But at the same time, we could see for ourselves when we fill up our cars, gas prices are going up because that oil doesn’t stay here. You know, the Keystone pipeline that wasn’t going to give us energy. That was to ship it overseas.

Mike Papantonio: Suppose to make these, just to make the industry make more money. Farron, thanks for joining me. We’ll be back with more stories next week.

Mike Papantonio: Thousands of leaked documents reveal how Facebook insiders plan to consolidate the company’s power over competitors by exploiting user data, of course. You know, the document’s stem from a 2015 lawsuit filed against the social media giant by California based APP developer. RT’s Brigida Santos joins me to talk about this. She has the backstory and there’s a big backstory here. Brigida, what specific, what specifics are outlined in the documents that you’ve reviewed at this point?

Brigida Santos: The over 4,000 documents dated between 2011 and 2015 revealed that Facebook employed users’ data as a bargaining chip to reward companies that it partnered with and punish those it deemed rivals. The social media giant, allegedly granted partners like Amazon access to user’s personal information while denying the same privilege to competing companies like the California based APP developer, Six4Three. Now Six4Three sued Facebook back in 2015 after the social media company cut back on third party access to personal data. Facebook claimed that these changes were made to protect users’ privacy, but the documents revealed in this case rarely mentioned privacy and in fact leaked staff emails state that third party APPs could still override users’ privacy settings and to transfer data to third parties, even when users explicitly requested for those APPs not to do that. Instead, the changes in 2015 suggest that they were made to protect Facebook’s market influence as it failed to generate profits and maintained user engagement in the mobile era. So Facebook, it appears ultimately believed that APP developers, we’re getting a lot more value from Facebook’s data than Facebook was getting in return from those APP developers. So that’s why they really made these changes.

Mike Papantonio: Okay. So their actions, clearly they’re considering how to generate money from third parties. They’ve figured it out. You know what, Brigida, just, just an aside here for a second. Isn’t it amazing how the American public still is willing to turn over their lives to Facebook and say, well, gee, they don’t mean this any harm? What does it take? We’re at the point now to where if you go on Facebook and you mentioned something about, you know, I’m thinking about buying a new car. By the end of the day, you, you’re covered up with new car commercial, you know, people trying to sell you new cars. We see what Zuckerberg is up to and it’s almost like we’re in denial about it. And we’re almost in denial that, yeah, corporate conduct has gotten so crazy that we have no privacy. So I’m not, I’m not sure what the shakeup factor is. But what about the users in all this? What rights do they have once somebody finally gets it and they say, wow, you know, I see it finally, I’ve seen the light. Either they get rid of Facebook, which I recommend drop Facebook, or they figured out I’ve got some other rights. What are they?

Brigida Santos: Well, that’s exactly it. You know, users, they are the product whether they realize it or not. They’re turning over their personal information every time they take one of those cute little tests, like, which Game of Thrones character are you? They’re giving away their psychometrics. These third party APPs are collecting their photos, their friend’s profiles information, so their email addresses, etc. And the reason why these documents are so important is because they could actually open Facebook up to a legitimate antitrust lawsuit. You know, it’s really hard to win an antitrust case when the product is free, but now these documents outlined that the product is really not free and as you and I are aware, and I’m sure many other Facebook users are aware, Facebook is not neutral. It does play favorites in terms of the information that it does or does not allow and the information that it also shares with these APP developers.

Mike Papantonio: Thinking about the arrogance of that, Brigida. Here you have these snowflake Zuckerberg’s that I’ve been described. I love the term snowflake Zuckerberg. They’re like little Zuckerbergs. And they’re out there deciding, gee, you know this, this language that you use is just, it’s just too horrible. We can’t, we can’t expose our people to it. Well, if you look at the language, it’s always something they disagree with. We don’t agree with, look, we know some of these people are certified nuts that try to, try to get their message out there. Of course crazy people are always going to do that, but do I need mom and pop Zuckerberg telling me what I can and can’t see? The other part of it that really bothers me about this, you and I have talked about it in the past, is Zuckerberg acts like we’re, taxpayers aren’t important.

Taxpayers, Mr. Zuckerberg helped you build Facebook. And so taxpayers do have a constitutional involvement. Now, you might’ve taken the infrastructure, you might’ve taken those fiber optics and done what you wanted to do with them, but without taxpayers, Facebook would never happen. Just like all of the other sites that are making a determination that they’re going to be mommy and daddy. They’re going to make a decision about what I can see and what I can’t see. And yet, here’s what most bothersome thing, I don’t know your quick reaction millennials are buying into it. What do you think Brigida? I’m seeing, I’m seeing it left and right. Millennials say, oh yeah, this is okay with me. What’s that about?

Brigida Santos: I don’t know that they do think it’s okay. I think they just, this is a monopoly, whether people want to admit it or not. They don’t really have very many choices for where else they can go. Where as many people are using the, the social media site, they are connected to everybody in this. And so it’s very hard to get people to turn away from it. And again, Facebook is pretending that they’re silencing certain people because they have a responsibility to do that, they say, but this is really about advertising dollars and about trying to avoid US government regulation.

Mike Papantonio: I don’t need mommy and daddy Zuckerberg telling me what I can and can’t see. And I think most, most people that have a free thinking mind would agree with that. And what’s bothering me about millennials, I don’t believe they even teach things like, you know, the importance of these constitutional rights in school anymore. They don’t, they don’t even teach those classes. So I’m really bothered by where this is going. Brigida thank you for joining me. Okay.