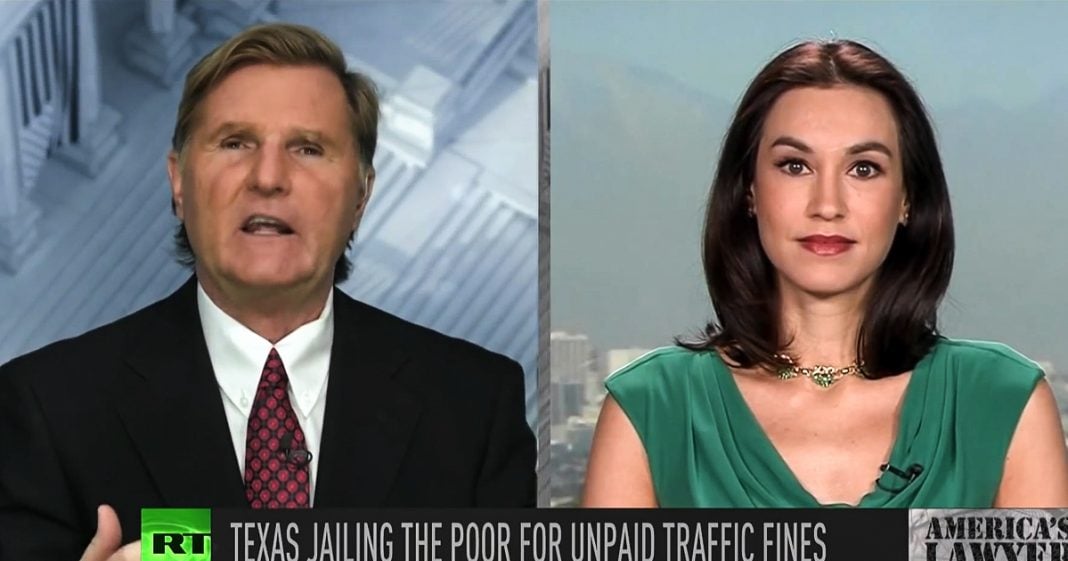 Via America’s Lawyer: Texas has a new law that could result in prison sentences for up to 10 years in jail for anyone who protests a new fossil fuel pipeline. Mike Papantonio and Trial Magazine’s Editor Farron Cousins discuss. Also, Texas has been asking judges to stop throwing people in jail for unpaid parking tickets. They haven’t listened. RT Correspondent Brigida Santos joins Mike Papantonio to discuss.

Mike Papantonio: Texas has a new law that could result in prison sentences for up to 10 years in jail for anyone who protests a new fossil fuel pipeline. I couldn’t make that up. This is just one of the many anti protest bills that states have passed and I have Farron Cousins from the Trial Lawyer Magazine here to explain all that. You know, I looked at this and it was almost as if there’s this notion that if it’s fossil fuel industry, then nothing really applies constitutionally. First Amendment really doesn’t apply. You know, the right to protest, right to free speech. I don’t know how they get here. Now let me back up and say yes, there are times when the right to protest can be controlled. You can say you can protest over here. There are times when you say that, that your speech is so angry or it’s so dangerous that it can cause harm and so we can put some kind of regulator on this. But this is crazy talk.

Mike Papantonio: This is absolutely crazy talk and it’s the only, it’s a type of crazy talk that I can only expect. We started seeing this, oh, by the way, in the Obama administration, and now we’re seeing it now with Trump and it’s coming full circle. What do you think?

Farron Cousins: Right. This is exactly, well, essentially this is the result of the Keystone XL pipeline protest from years ago and the Standing Rock protests. The, the states all across, especially the, the fossil fuels states, the southern states, they saw those protests and said, well, we want a lot more pipelines in our state. How can we stop this? And not just stop the protesters, it’s stopping the publicity of how bad these pipelines are. Because when the protesters show up, the news cameras show up, news cameras show up, people start digging in. They understand, wait a minute, this is really bad for my state.

Mike Papantonio: Okay, so here’s the problem. Look, I gotta tell you something. One thing I studied really well in law school was constitutional law. You’ve got so many problems here. Sometimes you have the conflict between what we call police powers and what you call, well First Amendment, whatever the other constitutional issue may be. And those police powers come in conflict. Okay. Most of the time the police powers are going to be in pretty good shape. You’re usually, you’re going to win on police powers more times than you lose. So they’re trying to do this under what we call health safety and welfare police powers. That’s where they’re trying to come from. But they’re using all along, the wrong language. The wrong the, the language is you can’t do this if this interrupts an economic interest of the state or the entity. You can’t do this if you are affecting crucial infrastructure. Okay. Just with those two words, with those two phrases, you see the problem, right?

Mike Papantonio: You see the constitutional problem here. This is a big constitutional problem. No, no surprises it’s being driven by the, by the fossil fuel industry. Oklahoma, North Dakota, Iowa. I could go on forever. But you see constitutionally you got 35 states trying to look at this. I think it’s a train wreck for them if you have a supreme court that’s honest about the interpretation here.

Farron Cousins: Exactly. Especially because a lot of these states went a little overboard with their laws, and it’s not just going after the people who show up at the, the pipeline protest. It’s any organization that went out there and promoted that there was going to be a protest. You know, or that we should organize against this pipeline. So you’re talking about the Sierra Club, you’re talking about the environmental working group. Any, any group out there promoting environmental activism suddenly becomes a criminal organization under these bills.

Mike Papantonio: Let me add one other point. They’re calling it riot boosting. That’s the term. Again, riot boosting. What is riot boosting? And so what they’re, we’re talking about putting people in prison for 5 years, 10 years, $100,000 fine. When you don’t, you don’t even have to be there. You have to be accused of, of actually getting the people there. I don’t know. I think this is a, if we have some honest appellate courts, in the old days when we had that, this thing would be dead on arrival.

Mike Papantonio: Texas has been asking judges to stop throwing people in jail for unpaid parking tickets. They haven’t listened. RT correspondent, Brigida Santos has the full story. People are arrested and jailed when they can’t afford small fines, even though Texas passed a law that tried to curb the practice two years ago. What’s going on here Brigida? What a crazy story. What’s happening here?

Brigida Santos: This is insane. Now let’s rewind two years. Like you said, back in 2017, the Texas legislature passed a law allowing judges to shift punishments from jail time to community service or other alternatives for defendants who simply cannot afford to pay fines associated with Class C misdemeanors. Now Class C misdemeanors are the lowest level criminal offenses in Texas and they carry a maximum fine of up to $500. And in 2018 to give you an idea of what kind of offenses these are, 70% of all Class C misdemeanors in Texas were traffic related. So these are nonviolent. These are not that big of a deal and there’s no jail time attached to Class C offenses particularly themselves. But judges can still throw people in jail if they fail to pay those fines. Now the keyword there is can. The whole point of the legal change in 2017 was to get judges to stop putting people in jail if they were too poor to pay and instead to divert these nonviolent offenders from overcrowded jails to serving the community or signing up for payment plans, and that has not happened.

Mike Papantonio: Well, yeah, Brigida, is this a problem that’s specific to Texas? I mean, you told us if, you told us about law change in Texas. I mean, why judges are still sentencing poor offenders to jail. We, we kind of get the notion of that, but is it a problem specific to, to Texas?

Brigida Santos: Oh no, absolutely not, this is happening across the country. In fact, back in 2016 I actually covered this issue here in California, where minorities are disproportionately arrested for being unable to pay parking tickets and parking tickets in Los Angeles are insanely expensive. There $68 on average. The fee only doubles if you don’t pay them within 21 days. If you go without paying them long enough, more fees are added. The state can charge the owner of the vehicle with a failure to appear in court, suspend your drivers license and car registration and even issue a warrant for your arrest. So this is something that’s happening all over the country. It is not specific just to Texas.

Mike Papantonio: Yeah, a ticket for $60 or $80 could mean the difference of whether or not that company, that, that, that family can go out and buy groceries for goodness sake. I mean these judges know that. I mean have we become so, have we become so awful in choosing our judges that they don’t get the reality of how people live? Listen, Texas’ state judicial network, it’s vast and the system trust’s judges to use their brain, to have discretion with little or no oversight. Is this where the problem lies? Have we gotten to a point where we can’t actually have a judge use their common sense and understand this is the human condition that you have to work around? You need to be creative. You don’t need to throw people in jail. You don’t need to fine them for $200 because they can’t pay a traffic ticket when they can’t, some of them barely feed their family. I mean, what’s happening out there?

Brigida Santos: Yeah, look, this isn’t a perfect law, so judges are not using their discretion. It doesn’t require them to rely less on jail sentences. And while the law has made some improvements, for example, it’s led to a small increase in waved fines and diversion to community service. Still last year, 75% of all Class C misdemeanors in Texas were resolved with jail time, which means they’re not using their discretion. Now, in the past, judges did say that they had no idea they could use their discretion and waive fees or issue alternative punishments. So it’s very likely that’s still the case today, especially if it’s not being streamlined and no one’s making a bigger point of this issue in, with judges.

Mike Papantonio: Well, how, how does a judge, how does a judge get to the point that they’re appointed as a judge and they literally don’t understand that they have discretion? That it’s not, it’s not black letter law that they have discretion. How did they get to the point? That’s the first question. And then the other thing I’m wondering is it, is it likely that Texas is going to pass a policy that limits judicial discretion and do away with time, jail time as a consequence for unpaid fines? What’s your take on both those issues?

Brigida Santos: Well, first of all, I think that judges know that they can use their discretion more than they admit that they do. But a lot of them have said that they want these punishments because they think that it results in personal accountability. But if people can’t pay, what is their accountability for not paying because they’re poor or for having a traffic violation? It’s unclear. And when it comes to your second question, I think that the argument could easily be made because there are over 2000 judges determining these cases. So I don’t know. They just don’t seem to know that they can do this or care that they can do it. And unfortunately, it’s creating a modern day debtors’ prison, which is something that was outlawed a long time ago and has been ruled to be unconstitutional by the Supreme Court.

Mike Papantonio: The debtor’s prison is back in full swing in America right now. Brigida, thank you for joining me. This is another one of those startling stories that again, look for it on, look for, look for this story in corporate media. See if you can find it. Thanks for joining me, okay.