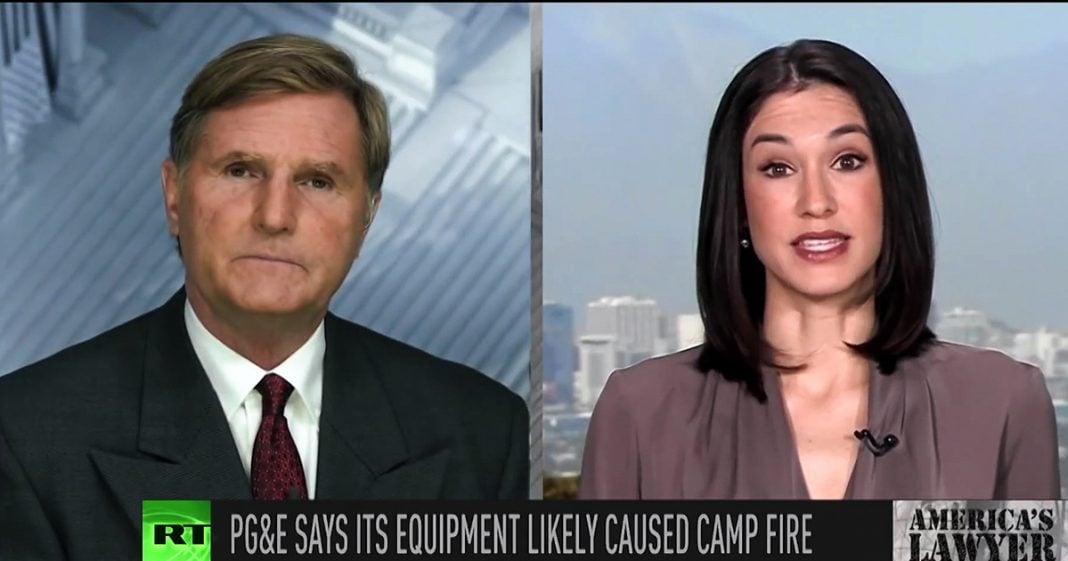 Via America’s Lawyer: Drug company executives were hauled before the Senate to explain while the, why are they gouging American citizens on the cost of their medications. Mike Papantonio and Trial Magazine Executive Editor Farron Cousins discuss. Plus, RT Correspondent Brigida Santos joins Mike Papantonio to talk about PG&E, and how they finally acknowledged their equipment was likely the cause for the deadliest wildfire in California history.

Mike Papantonio: Last week, drug company executives were hauled before the Senate to explain while the, why are they gouging American citizens on the cost of their medications and it didn’t go well for those executives. Finally, finally, somebody starts asking these people, let me get this right. We got two thousand, ten thousand, twenty thousand percent markup on your drugs and you’re telling us it’s because R and D, that’s a lie because these drugs had been on the market forever and you’re still rise raising the prices. You know what, this calls attention to both the corporate Republicans and the corporate Democrats because the corporate Democrats are as much of the problem as the corporate Republicans. Take it from there.

Farron Cousins: Well, and the reason they’re as much of the problem is because Big Pharma tends to spread their money out almost evenly. Republicans get a little bit more, but it’s statistically insignificant. So they bought both sides. But here’s an interesting thing because yes, all of these executives said well R and D is so expensive. We spend a lot of money. There was not one single drug between the year 2010 and 2016 approved by the FDA that was not funded and developed without taxpayer money. Every drug from 2010 to 2016 that was approved.

Mike Papantonio: Explain how that works and universities, go ahead and talk about that.

Farron Cousins: You know, taxpayers, we fund the universities. The government itself hires out scientists to do this research. We have government funded scientists and every drug from 2010 to 2016 was paid for and developed with tax dollars.

Mike Papantonio: So here’s the, here’s the real numbers on it. 75% of the money that they’re saying is actually for R and D actually is for advertising.

Mike Papantonio: It’s all these ads that you see every 10 seconds on the air. That’s where the money’s going. And now what I love about this right now, first of all, I’m not optimistic that much will come out of it. This is all a show. This is show. They’re going to appear in front of these congressmen and the Congress going to ask them a few tough questions, and you’re only going to have a couple of people like Ron Wyden who actually does anything about it. You’re going to have Cory Booker’s and the Feinstein’s. You’re gonna have all those people that say, ah, you know, it’s, let’s give them a break. They won’t say that overtly, but that’s what they’ll do behind closed doors. Farron, thanks for joining us.

Farron Cousins: Thank you very much.

Mike Papantonio: Pacific Gas and Electric has finally acknowledged that it’s equipment likely caused the deadliest wildfire in California history. RT correspondent Brigida Santos joins me now with that story. Brigida, inspections of PG&E’s transmission lines identified equipment that should have been repaired. It should have been replaced years ago. Why didn’t they do that? Why didn’t they take the steps to fix the problem before, before it became this catastrophe?

Brigida Santos: Your guess is as good as mine. It’s incredibly unclear why PG&E didn’t take steps to address safety issues, but it likely has to do with the fact that the company has become too big to fail in California. Now, in nearly half the state, PG&E is the only company authorized to deliver electricity and gas to customers. Now it maintains a clear monopoly in the market and it’s no secret that PG&E’s infrastructure is aging and unsafe. Between 2014 and 2017 investigators attributed over 1500 fires to the company’s power lines and hardware, and last year it’s equipment is suspected of causing the Camp Fire, which as you said, is the deadliest and most destructive wildfire in California history. While the cause of the blaze is still under investigation, PG&E has said now that it believes its equipment will be declared an ignition point. That fire burned for 17 days, destroyed thousands of homes and killed 86 people. And sadly it isn’t the only deadly wildfire that PG&E has been suspected of causing. The year before, in 2017 the company also took responsibility for the Tubbs Fire in Sonoma County, which killed 22 people. Now that fire at the time was also the deadliest in California history, so it’s out doing itself every year. And it’s possible that these fires and deaths could have been prevented if PG&E had only fixed it’s troubled transmission lines and conductors.

Mike Papantonio: Yeah. Well, full disclosure here, I’m working on the Woolsey Fire, which was also a huge catastrophe in California. It wasn’t PG&E was Edison. But the problem is we’re finding the same types of things where they, they’re put on notice. They know they should do something. The, the, that we know exactly where the fire is going to start. Everybody is telling them, this is going to be a problem. You need to do something. No, we need to save money. Here’s the problem with it, isn’t it Brigida? They understand that all they have to do is pass this on to tax under, under the rate payers. I mean rate payers have to pick this up and because of that, PG&E gets all these special deals, they get handled properly for being negligent, for doing their job in a way that is substandard. They actually get rewarded for that. The US bankruptcy court has allowed PG&E to move forward with this bankruptcy filing. If successful, this wouldn’t be the first time the state has bailed PG&E and out. I mean it’s, it’s almost like it’s, it’s it, it takes you back to the, you know, to the, to the big bailout of the banks. They ran such a ridiculous poor operation that in 2008 for example, we bailed them all out because they’re incompetent boobs. So taxpayers then had to pay for these Wall Street types that were incompetent boobs. This is the same thing here, isn’t it?

Brigida Santos: It absolutely is. It’s not the first time that this has happened. Back in 2018 the California state legislature passed a law allowing PG&E to pass the cost of it’s 2017 liabilities to customers, which potentially could raise rates an estimated $5 per year for every $1 billion issued in bonds. Now, it’s unclear whether that law is going to roll over and apply to PG&E’s 2018 liabilities, but the company’s bankruptcy filing this year comes in addition to that as PG&E faces $30 billion in damages for reportedly fueling over a dozen massive wildfires since 2017. Now in the past, it’s likely they could have just ignored these problems, but combined with six years of drought, it’s bound to end up with wildfires.

Mike Papantonio: Yeah, I mean it they, they, yeah, there’s always a blaming. Yeah, of course it’s a drought. We understand that. But when you have a set of facts that give rise to a closer look and more diligence, that’s what, that’s the responsibility of the folks making decision at PG&E. I mean that’s the, that’s what negligence is, is about when they don’t do their job. And in this, this is well beyond negligence. This, this is reckless conduct. For Camp Fire survivors, PG&E bankruptcy makes it very difficult, very complicated for the people who are most affected to ever be paid for their losses, doesn’t it?

Brigida Santos: Yes, absolutely. And the company has already stopped issuing payments to many wildfire victims as a result of this bankruptcy filing. Bankruptcy also means that the future of gas and electricity for 40% of California is uncertain. And this is why we need more competition and why the state really needs to start cracking down on monopolies and doing a better job of inspecting and regulating giant utilities.

Mike Papantonio: Yeah. Jerry Brown has treated these utilities as if they’re, they’re, is a part of his family, his children. They’re always there in line for a handout when they commit these ridiculous steps of negligence. They’re always there asking for relief from legislature and they always threaten, well, gee whiz, if you don’t do this, we’re just going to go out of business. Well, maybe that’s the market place. Maybe they do go out of business and somebody steps back in. Brigida, thank you for joining me. Okay.