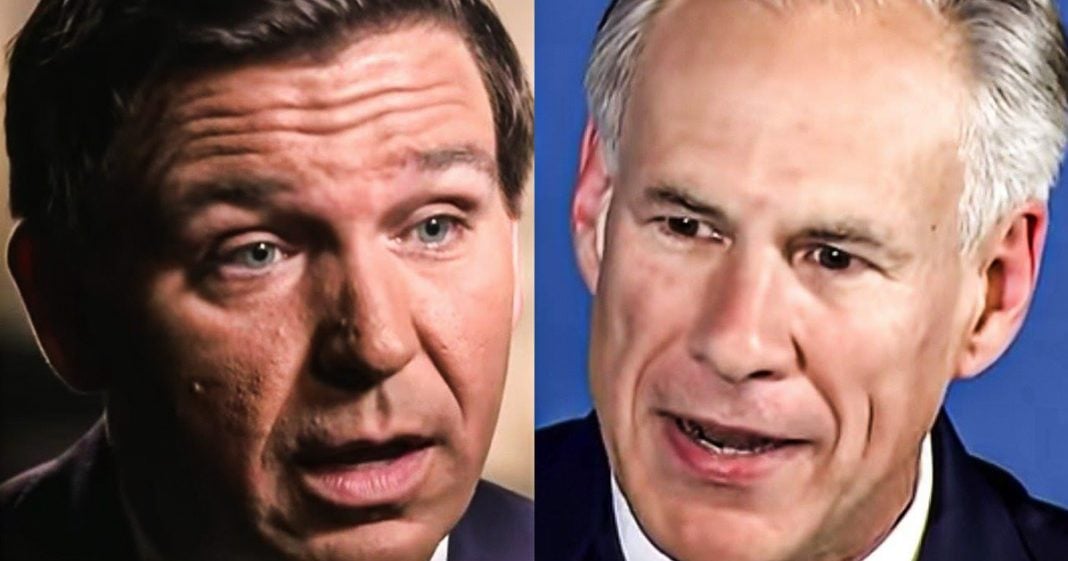 According to a new study, Red States and those led by Republican governors have been slower than Blue States to adopt policies to prevent the spread of the Coronavirus, and now they are starting to see the ramifications of this. The virus is spreading in these areas as leadership waited too long to act, and in cases like Florida, they actually waited to get Trump’s permission before they would issue “stay at home” orders. Ring of Fire’s Farron Cousins discusses this.

According to a new study from researchers at the university of Washington that was released just this week, Republican controlled States here in the US have taken an average of roughly three days longer than States run by Democrats to enact any kind of protocols or any kind of stay at home orders to combat the spread of coronavirus. Now that may not seem like a big deal, three days. So a red state stayed open three days longer than a blue state. So what does that mean? Well, the researchers say that this extended period, even if it is anywhere between two and four days, could be the difference between a few thousand infections and tens of thousands of infections. That’s how rapidly this thing spreads and that’s what happens when you hesitate because you’re too afraid to take action. Take my state of Florida here.

Earlier this week I did a video talking about the fact that our Republican governor, Ron DeSantis had refused to shut down the entire state of Florida. He did not want to issue any kind of stay at home order whatsoever because he said, he said the white house wouldn’t, wouldn’t tell him he should do it. 30 minutes after that video went up, DeSantis came out and issued a stay at home order for the entire state of Florida, and he told us in his decision making that I spoke to the white house and they finally agreed that this was the right thing to do. So this wasn’t even DeSantis’ decision. This actually came from the white house because as DeSantis clearly told us on two separate occasions in the past week, he’s not going to do anything if Trump doesn’t give him permission. And the same is true for all of these other Republican governors who are taking too long to act.

Texas, they don’t want to do it if Trump doesn’t want us to do it. Georgia, Mississippi, all of these States are terrified of taking this crisis more seriously than the president of the United States because then it puts them at odds with him and even though, yeah, now this week, oh, he changed his tune. He sounds presidential and serious. No, the guy understands that he’s screwed up. He can’t admit that he screwed up and so he’s just going to pretend like he never screwed up in the first place. That’s what we’re dealing with now. But these Republican governors refused to do anything for days after blue States were like, nope, screw this. We’re not going to let it happen here. We have to curtail this. We know what we have to do. We’re listening to medical experts, not the moron president, but red States did the opposite.

They said, we’re not listening to medical professionals. We’re going to do whatever Donald Trump says we should do because that’s the kind of people we are and just watch. We’re already seeing it here in Florida and I use that a lot. That’s where I am. This is the state I know. I see our numbers every day and we just continue to climb. Climb, climb, climb, and it’s because we didn’t shut down and we let the spring breakers come down here and bring the virus with them, and the healthy ones got to take it back with them and that’s going to spread to other States too. We’re gonna see it in Georgia and Mississippi and Texas and several other red States throughout the country as well. The blue States may have gotten hit first, but the red States, because of their refusal to act, are about to be hit even harder.