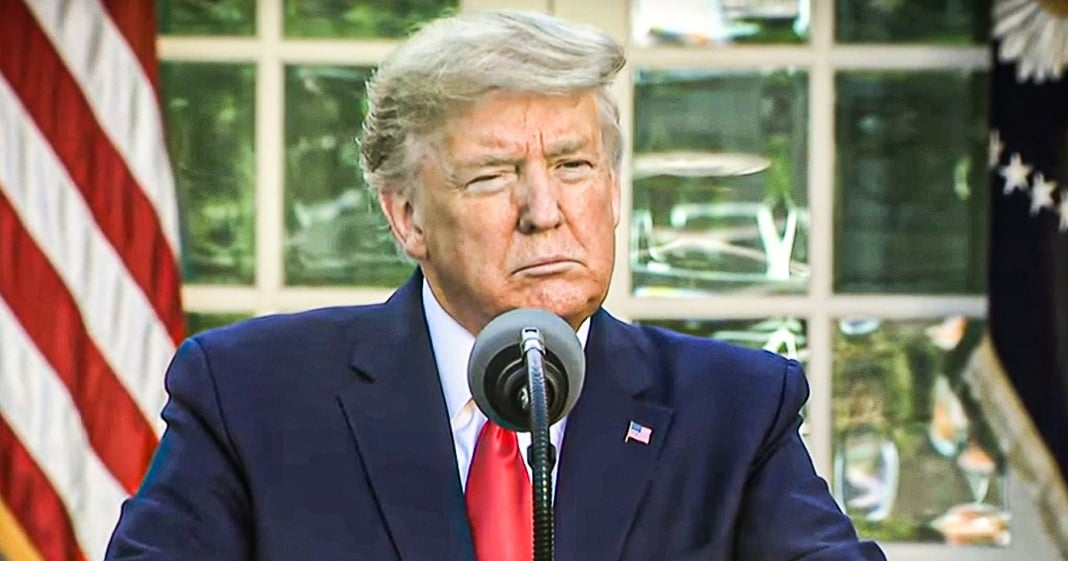 Corporations who are taking bailout money from the federal government are supposed to adhere to a strict set of rules. But they won’t have to worry about anyone looking over their shoulders, because Trump has refused to give Congress oversight authority to make sure that companies are complying. In a few months we can almost guarantee stories of corporations breaking the rules and not being held accountable, as Ring of Fire’s Farron Cousins explains.

So last week when Donald Trump signed the stimulus package into law, he decided to issue a quick little signing statement along with it. You see, before he issued this signing statement, the control of oversight for all of the corporations lining up for a bailout would have rested with Congress, meaning that this Democrat controlled body would have the final oversight of all of these companies lining up to get their hands on that $500 billion that’s now available to them. So if any company didn’t want to play by the rules, didn’t want to not use this money to give their CEO a raise or not use this money to buy back their own stocks, Congress could take action against them. But Trump signing statements said, yeah, I’m going to take this power away from Congress and I’m going to give it to my good buddy Steve Mnuchin, the secretary of the treasury. The guy who Kamala Harris as attorney general of California should have had in prison.

But instead he Rose through the power ranks and he now gets the final say in who gets the bailout money and what rules they have to follow and if they don’t follow them, then what punishment they shall face. Which given the fact that Mnuchin himself is a corrupt banker, I’m willing to bet that the punishment is going to be absolutely nothing. And you know what? I can’t help but be angry at Kamala Harris for this. Right? Because again, she could’ve had this guy in jail, in prison and she, she herself personally opted not to. That was her decision. She made it. Now he gets to call the shots on hundreds of billions of dollars, if not trillions. So way to go, Harris. Thank you. We appreciate that. Thanks for being a good corporate Democrat and I’m sure every single one of these corporations who is going to get this bailout money is probably gonna thank you for it as well. Because now they don’t have to worry about somebody looking over their shoulders. They don’t have to worry if they decide to maybe spend just a little bit of it on some stock buybacks or maybe sprinkle their CEOs pay with a little bit of bonus there. That’s on you. I know Trump is the one who issued the signing statement. So yeah, he bears a little bit of the blame.

But if it wasn’t for Kamala Harris, this power wouldn’t be going to Steven Mnuchin right now. That is a fact. That is a plain and simple fact. She allowed that to happen and she does need to be held accountable for this. She needs to be called out for this as does Trump and as does Mnuchin. Right? And we have talked about all of the horrendous things Mnuchin did back in the day before he became secretary of the treasury. This man absolutely should have been in prison. He scammed people left and right. That was this whole deal. Donald Trump has always been a con man. Trump has always been the kind of guy to take powers away from Congress and the Senate that he just didn’t want them to have and that’s exactly what he did here. But folks, this is a disaster waiting to happen. I guarantee you within a few months, we’re going to start seeing the stories of CEO get mid year bonus after taking bailout funds. CEO’s decide to buy back their own stocks with their bailout funds, and I can also guarantee you, Steve Mnuchin will do absolutely nothing about it.