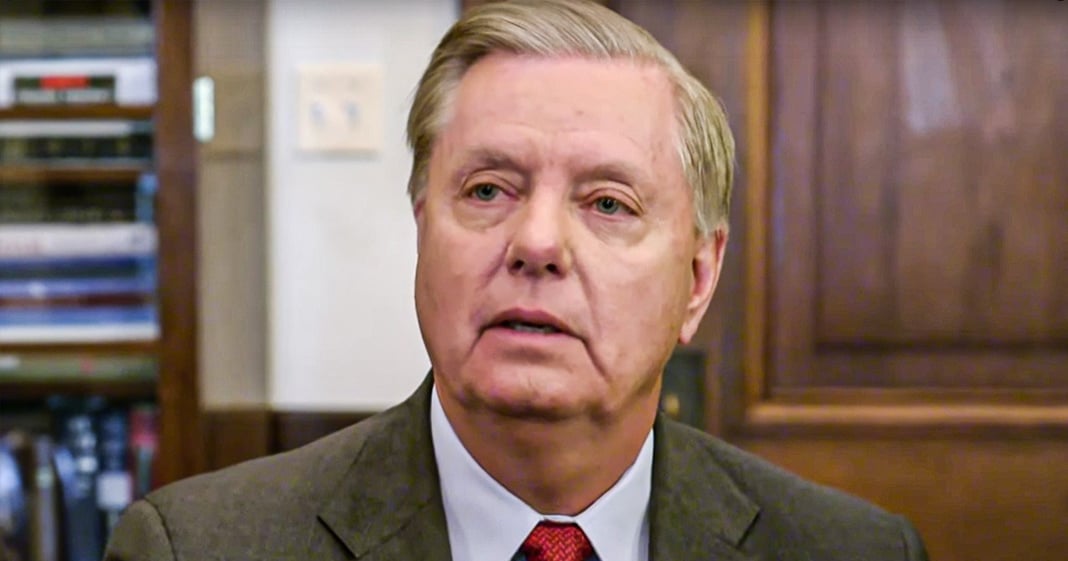 Republicans are trying to pin the blame for the dismal federal response to the Coronavirus by claiming that the Democrats refused to take action because they were preoccupied with impeachment. This isn’t true, but it could certainly resonate with voters and become a powerful Republican talking point in the run up to the election. Ring of Fire’s Farron Cousins explains what’s happening.

Republicans in Washington DC have come up with a new talking point as to why the response to the pandemic has been so dismal from the federal government and that talking point is that the Democrats were too distracted by impeachment to do anything about it in the early days. The Democrats put us so far behind the eight ball that now we’re having to play catch up and thank God president Trump is out there catching up for us these Republicans say. Now first and foremost, this is not true. There are reports, there is evidence that Democrats all the way back in that last week of January, while impeachment was still happening, we’re asking Alex Azar for updates on this. They were monitoring this. They were working on this. They were paying attention to this as were some Republicans. They were having meetings on this. They had hearings in the Senate on this during impeachment. But none in the house actually until after the Senate impeachment trial had ended.

So this was by Republican design. They weren’t letting them in the house, the democratic controlled house get the information. So that’s the truth of the situation. No, the response from the federal government did not suffer because Democrats were obsessed with impeachment. Now, here’s the second part of this. What I just told you, doesn’t matter. All the instances of Democrats back in January, demanding hearings, wanting answers from this administration, taking it seriously, that doesn’t matter because that’s not going to come out in the talking points. Republicans already jumped on this issue. They framed it the with, the way they wanted, and that is going to be the talking point that we’re going to have drilled into our brains from now until November, and I have to be honest, that’s a winning message. Because it shows two things. One, and again, these aren’t true things, so don’t think I’m agreeing with Republicans.

None of this is true, but the public out there, the people who don’t tune into these videos, they’re going to think this is the way it is. One, Democrats were too obsessed with taking down Donald Trump that they let the American people suffer. And number two, it wasn’t until the Republicans were freed from the impeachment mess that the government started responding. Democrats tied their hands. Democrats hate Trump so much that they let people die from this pandemic. Again, none of that is true, but that is what they’re going to say and that talking point absolutely is going to resonate with the American public. Because even if Democrats go out there and try to get ahead of this message and they say, no, no, no, no, no, no. This isn’t true. We have this evidence of this meeting. We have this, we have these letters we sent all the way back in January. We were taking it seriously. Fantastic. Good for you Democrats.

Republicans already got in front of this though. Fox news isn’t going to be talking about these meetings the Democrats had back in January. Donald Trump’s not. He’s going to start repeating this every single day from now until the election folks. This is the kind of misinformation we are up against and we can talk about the truth. We can go out there every day and counter these attacks, which apparently we’re going to have to do that because the democratic establishment, you know, the democratic machine sucks at messaging. They suck at coming up with actual coherent messages. They’re always playing from behind because the Republicans for as evil as they are for as horrible as they are, they are really awesome at coming up with great messages that absolutely destroy the democratic party. And again, part of the problem is because Democrats for the most part like to deal in reality. Republicans don’t.

Republicans have no problem just making stuff up and throwing it out there and the public believes it. It’s almost a handicap that we have because we insist on telling the truth and we have to keep insisting on telling the truth. But I don’t know how to fight something like this. This is going to hurt. But let’s just hope that enough people in this country are smart enough to know after all these years that everything the Republicans are telling you is a lie. Because if they’re not smart enough to know that November is going to be a bloodbath for the Democrats.