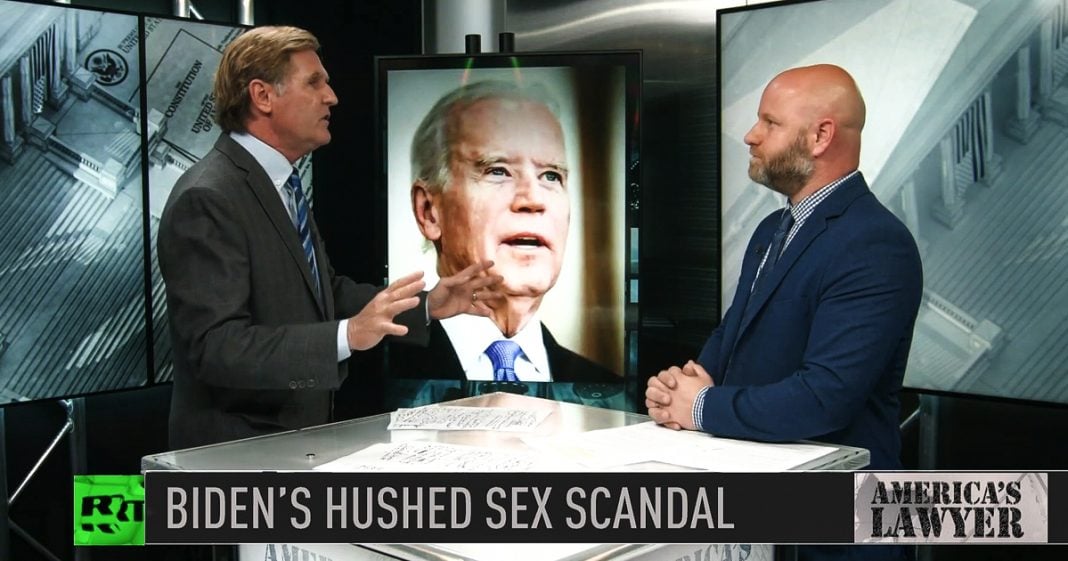 Via America’s Lawyer: The mainstream media has all but silenced the story of Joe Biden’s former staffer Tara Reade accusing him of sexual assault. Mike Papantonio and Farron Cousins discuss.

Mike Papantonio: A former staffer has accused Joe Biden of sexual assault and the media is refusing to talk about this. This, this story makes me so angry along with so many of the other stories out of there right now. But here you have, they have got, they’re stonewalling this woman who’s come forward with Tara Reade, they’ve stonewalled her since 1993. The media won’t touch it and they’re still ignoring Tara Reade, even though they’re wit, she, the day, day it occurred, she went and told her brother, she went and told two other witnesses. This isn’t a made up story. They’re protecting this knucklehead who, you know, the Democrats are so sold on him that they’re going to let this, they’re going to let us ride.

Farron Cousins: They, they absolutely are and at this point they’re actually trying to downplay it and say, okay, well even if it’s true, hasn’t Donald Trump been accused of doing this to more women than Joe Biden? It’s essential, we’ve seen the hashtag the lesser of two rapists, and that’s actually to mock these corporatists who are trying to make this argument here. And listen, we don’t know necessarily did this happen, did it not. This, this needs to be investigated, but we have to put the benefit of the doubt in the woman here and that’s what Joe Biden himself has said in the past.

Mike Papantonio: You know what’s really troubling too about it is TimesUp. TimesUp as an organization that’s tied into the whole me too organization. TimesUp, ties directly to Joe Biden through the PR people who run Biden’s campaign. All right. She goes to them. Tara Reade goes to TimesUp under the same kind of story everybody else has.

Mike Papantonio: In 2019 this happened to me. They ignore her. They say, we’re not going to do, they refuse to do the story. We’re not going to do this story because Joe Biden was already gonna to be the, you know, part of the promise land for the Democrats. Interesting. You, you, you do stories on this pretty regularly. What’s the response you get from the, I mean, the boneheads out there that are just so Democrat. They’re so tied to being their only identity, their only tribal identity is I’m a Democrat and they stop thinking beyond that. Tell us about some of the responses you’ve gotten.

Farron Cousins: We’ve gotten a lot of emails from people saying, you know, you can’t, you can’t discuss this. I had somebody tell me the other day, it was my job to support Joe Biden. That they were emailing me to tell me what my job was allegedly supposed to be. But, but the truth is here. This is a story. This is a real thing that Joe Biden has not had to address because the media is not asking him about it. He has done countless interviews since this story emerged and not once has anybody asked him, hey, you have been accused of this. You want to give us your side of the story maybe?

Mike Papantonio: Let me be specific about that. CNN has a town hall meeting. Okay. They can ask him anything they want. They ask him about everything except this after the story had broken. Chuck Todd, MSNBC. Chuck Todd has him on this very personal kind of interview. He’s talking about everything, everything about his life. But he never asks him one time about this woman who has accused, made, made this accusation that is legitimate. There’s no, I mean, if it’s not like there were no witnesses. Okay. There were no direct witnesses, but that day she went and talked to people. She told them what happened and when they, when she tried to push back, she met a total stonewall.

Remember Joe Biden is the guy who crucified Anita Hill. Okay. Don’t forget that, that is being part of the story. Anyway. CNN, MSNBC, the Intercept, thank goodness, again, comes to help. Intercept, you know, I think to me right now in journalism, it is the standard. Intercept comes in, ignores CNN, ignores MSNBC, ABC, NBC, CNN. Jimmy Kimmel has Joe Biden on the air. Oh, they’re talking about feel good stuff. They’re chumming chumming it up. Kimmel that day, the story breaks, everybody knows about it. Kimmel doesn’t ask one question about it.

Farron Cousins: Right and you also have to give a lot of credit to Katie Halper from the Katie Halper show. She’s the first one to really talk to Tara Reade and air that interview. Krystal Ball over at the Hill rising on the Hill has done it as well and that’s what needs to happen. But these independent media outlets, the non-corporate owned who do not, you know, engage in this kind of tribalism. They’re out there talking about this story. They’re telling people, listen, this is a thing that, and nobody saying yes, 100% he definitely did it.

Mike Papantonio: Here’s the list of people’s stone, organizations stonewall. ABC, stonewall. NBC, stonewall. CNN, stonewall. Jimmy Kimmel specific, stonewall. Anderson Cooper, stonewall. Chuck Todd, stonewall. I could go on forever. These are people that call themselves journalists. They’re, they’re jokes and, and, and until somebody gives this woman a chance to tell her story, the public can hear it, the, the joke continues.