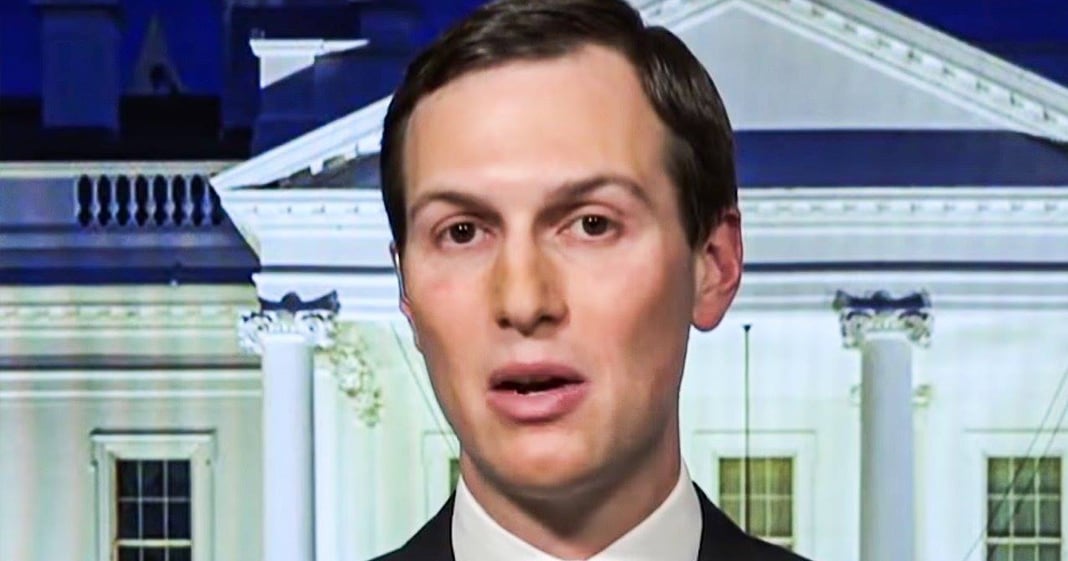 Jared Kushner will not allow the tenants in his buildings to skip rent or even pay late, but he’s hoping his friends at the banks will allow him to do exactly that. Kushner wants his loans to be put on hold for now because of the pandemic, but he refuses to extend that same kind of leniency to the residents of his buildings. Ring of Fire’s Farron Cousins explains what’s happening.

This past weekend, a Washington Post reporter, David Fahrenthold told MSNBC that Jared Kushner according to reports, is not going to budge one bit with his tenants. He is not going to allow them to miss a single rent payment for the month of April or even May if it goes that far. He is not going to reduce the amount of rent that they have to pay. He is not going to give them a couple extra days to pay. You pay when that rent is due or you get your butt out of my building, according to reports. And at the same time Jared Kushner is going up to his friends in the banking industry and saying, hey, I’m having trouble paying, paying my loans for these buildings I have. Can I maybe have a little leniency? Can you, can you give me some extra time? Can you maybe delay these payments until after the pandemic because it’s really taken a toll on me, Jared Kushner claims.

So the same arguments that his own tenants are trying to make to him except with them it’s real, Kushner is making to the banks because this multimillionaire allegedly can’t pay his poor bills. He doesn’t have the money, which is odd again, because Jared Kushner hasn’t lost his job. Jared Kushner is not hurting because of this pandemic. He has millions upon millions upon millions of dollars and his wife is the heiress of a billionaire. The president of the United States. They have money. They can pay their bills. The tenants can’t, but Jared Kushner has no sympathy for them. Jared Kushner is a textbook sociopath. Absolutely, without question, this kid is a sociopath and I call him a kid. He’s older than me, but he has the mentality of a child. People need relief in this country. This administration isn’t giving it to them. Congress, the house of representatives, the Senate, they haven’t given us much of anything at all. Most of that relief is going to these same bankers that Kushner is trying to suck up to, to get leniency from.

It’s going to major corporations out there who were too foolish with their own money, probably much like Kushner didn’t set enough aside for a rainy day because they spent it all on just buying their own stock back and then when the market tanked they lost all their money. The market will eventually go back up and all that money that they lost is going to come back because it’s not actual real money folks. That’s what the stock market is. Unless the company shuts down, you still have those shares. So when they go back up, the money comes back because it’s all imaginary anyway. But for the tenants, the people that live in these godawful Jared Kushner buildings, they need relief. They need him to accept their pleas for leniency. But he won’t do it because that man only cares about money. This man is a sociopath and there is no other way to say that and I hope, I hope for the sake of those tenants that these banks come knocking on Kushner’s door and say, guess what, you missed the payment. This building is now ours. That would be the ultimate justice in this story.