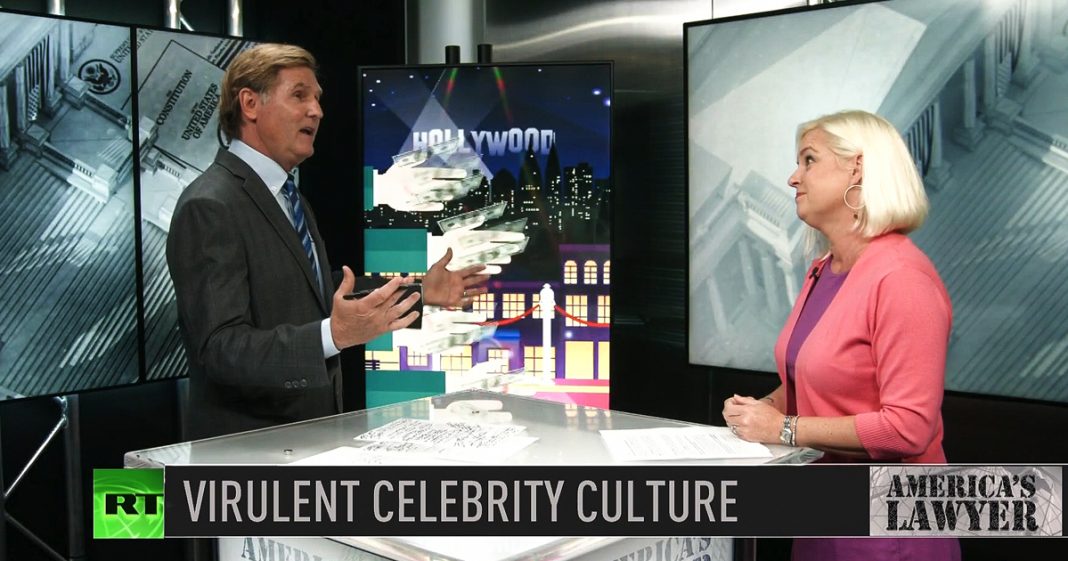 Via America’s Lawyer: Legal journalist Mollye Barrows joins Mike Papantonio to audit Hollywood celebrities, as they are flooding social media by asking cash-strapped fans to donate money for Covid relief funds, all while broadcasting from their multi-million dollar homes.

Mike Papantonio: While ordinary citizens are having their daily lives torn apart by government regulations under this new reality brought on by coronavirus, Hollywood stars have taken it upon themselves to ask their fans to dig deep into their pocket books and donate for the covid relief. But are these multimillionaires celebrities, are they asking that of his, of their fans and what are they doing themselves? This story to me, I’ve got Mollye Barrows with me to talk about it. This story is so outrageous. I’ve had to endure, people have actually sent, they’ve sent these videos to me, Britney Spears talking about, you know, this is a woman who’s been institutionalized. I mean, she’s, she’s cuck.

Mollye Barrows: Before we go off on cuckoo Britney Spears, she’s actually one of the few that’s doing it right. Now there’s a lot that are doing it wrong that we could take a look at.

Mollye Barrows: But if you go on her Instagram page, she, because I think she’s had issues with mental illness in the past because her father keeps her money. I think she is from, I mean, she’s from Kenner, Louisiana, Papantonio. She can’t, she cannot be high and mighty for very long.

Mike Papantonio: Okay. I’ll give you Britney Spears. How about Madonna? Madonna in her weird bathtub.

Mike Papantonio: Walking around in her kimono, pontificating, about issues.

Mollye Barrows: Relating to the masses.

Mollye Barrows: She’s in it with us.

Mike Papantonio: How about the Gal Gadot?

Mollye Barrows: Oh, I don’t know and I love me some wonder woman, but they’re just out of touch. It’s like, I think these are people that just don’t know how to connect because they live in a world that’s completely different from three quarters of the rest of the global population who are struggling from paycheck to paycheck. Are living hand to mouth, are now suffering without jobs because of the economic slowdown that we’ve had due to the coronavirus. And then you’ve got guys like Bobby Flay, that chef TV star, he’s got sitting on 150 million or something and he’s like, oh, I’ve started to go fund me page to help you help me pay my employees. You know, welcome to capitalism.

Mike Papantonio: It’s, here’s the heart of it. Okay. And I, I, to me, I come back to this all the time. They’re in a celebrity bubble. Okay.

Mike Papantonio: These are people that, while, you know, I guess while most people are studying humanities and calculus and history and things that we, we actually focus on in, in high school and college, they’re studying how to play the role of Macbeth, or King Arthur. So they’re not really high information to begin with. They really aren’t. So they’re in the celebrity bubble and what I was talking about that Gal Gadot is we’re all celebrities are singing John Lennon’s imagine. First of all.

Mollye Barrows: Does not comfort me.

Mike Papantonio: No, it doesn’t come from me. Half of them are about a step and a half off on range.

Mollye Barrows: Absolutely. I mean, look at the, the accusations of people jumping lines to testing when it came to different sports league. Same with the ultra wealthy. Same with politicians. Even in New York, there were stories coming out where people were paying to get tested or even paying to have access, early access to vaccines and that sort of thing. So it shows, again, the disparity between access of healthcare, but social media is an outlet that you know, as other people pointed out, the coronavirus levels the playing field. But nothing really exonerate or highlights that any better than social media because these celebrities, if you don’t have it to give genuinely, it’s going to show. If you’re a selfish self centered, living in a bubble type person and this is what seems like something good for you to share and it’s completely out of touch, then all you’re doing is giving the public an insight into just how shallow and terrible the human being you really are.

Mike Papantonio: And you have these folks that are in this ridiculous.

Mike Papantonio: Laughable, ugly, ugly celebrity bubble. Low information because really if you really consider what’s their background, it’s not like they came up as real intellectuals. These folks aren’t real intellectual.

Mollye Barrows: It’s hard work in their own business. I’m sure a lot of these entertainers strugg to get up there. So I hate to throw them all into the uneducated pot, but I do know what you mean. I mean, it attracts certain people to a certain field that they might not be as well read as other professions. So I completely agree with you about that. But I think you will appreciate this. You know, David Geffen had to, a billionaire, had to delete his whole entire Instagram account because he was like, hey, you know, kicking it with corona. You know, on my, self isolating on my $560 million yacht.

Mollye Barrows: And so people were furious and that’s what you’re seeing. Jennifer Lopez, hey, I’m self isolating with my family and my boyfriend, A Rods cool compound in Miami, you know.

Mike Papantonio: Okay. They’re self aggrandizing. They’re narcissistic. They are low information and more importantly, the most dangerous, they’re bored. They don’t have anything to do. So Madonna’s sitting in her frigging bathtub.

Mollye Barrows: I thank her for that, really.

Mike Papantonio: Walking around, walking around in her kimono, pontificating like we really care about what Ma, what Madonna’s take is on this whole thing.

Mike Papantonio: And we have to do the same thing. Taking care of employees, taking care and that’s a policy that we’re solid on.

Mike Papantonio: But we don’t go doing commercials about. Thanks for, thanks for joining me. Okay.