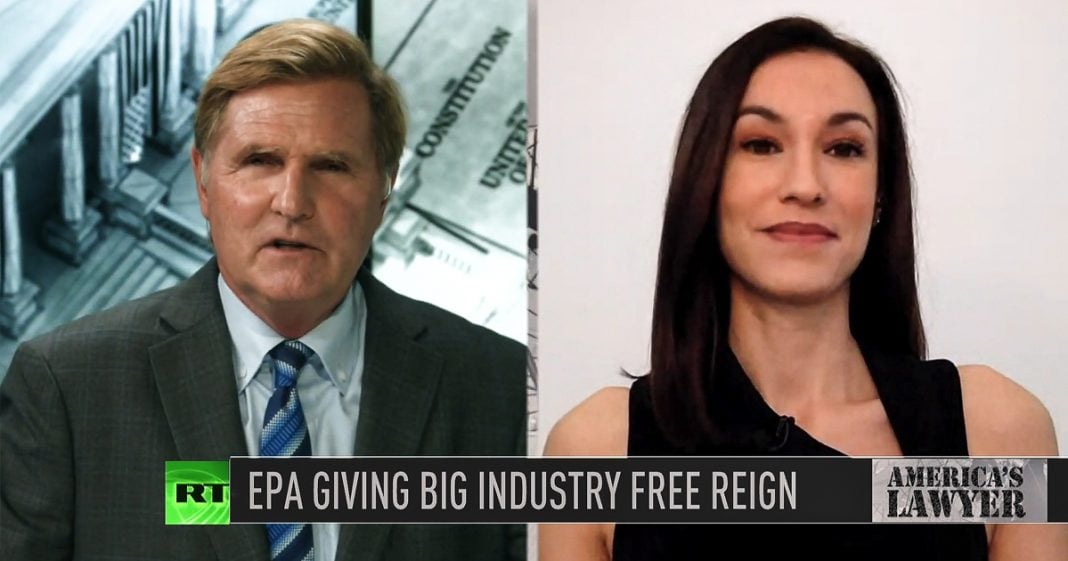 Via America’s Lawyer: Mike Papantonio is joined RT correspondent Brigida Santos to explain how federal agencies like the EPA may very well be taking advantage of Coronavirus bedlam to quietly roll back regulations, giving greater freedoms to big industry.

Mike Papantonio: The environmental protection agency has suspended its enforcement of environmental laws in the wake of the coronavirus outbreak. The new policy gives big industry a license to pollute during this global pandemic. RTs Brigida Santos joins me now from Los Angeles with the latest. Brigida, I’m sure you see this story is, these stories tell you the same thing that they tell me. Chemical plants can do whatever the heck they want. Oil refineries can do what they want. Pipelines can leak. Offshore Wells, you know, in deep water they can leak. It’s, it’s, it’s a free for all. It is a corporate free for all, a corporate polluter free for all. Which industries are going to benefit most with this directive as you see this story, how do you see this unfolding?

Brigida Santos: Well, the EPA regulates chemical, coal, and power plants. The oil and gas industry, as you said, steel manufacturers and so on. It’s supposed to keep tabs on gas leaks, contaminants and pollution in the air as well as the waterways. But now the EPA has told companies flat out that they won’t face fines or enforcement actions from the agency if they no longer monitor and report their own pollution violations. If companies exceed clean air and water limits or leak or dump chemicals into the water, they’re not going to face consequences as long as they claim that those violations are in some way caused by or connected to the fallout from this virus.

The EPA directive comes after a plea from the oil industry’s largest trade group, the American Petroleum Institute, which expressed worry over how the coronavirus outbreak has greatly impacted the global oil industry, which now faces its deepest crisis since the 1973 oil embargo. But the energy sector was already in trouble. It was the worst performer of the last decade according to the S&P 500 and now the EPA has also granted oil refineries relief from their legal obligation to produce gas blends that are designed to reduce smog emissions. This rule gives corporations a lifeline while putting human lives on the line.

Brigida Santos: Sure. Critics of the new policies say that in some cases, yes, there are legitimate justifications for changing some policies. You know, many regulated industries have been forced to reduce their staff just like other industries. So if there’s no staff to monitor pollution, changing the policies, there may be some argument that that could be necessary. But the problem is COVID 19 may now be used as a blanket excuse to cover up a wide variety of violations by big industry polluters. Critics say, if those industries can keep operations running, can keep staff on board and can keep burning revenue, then there’s no reason they can’t have the budget to also keep those pollution monitors and their staff on board as well.

Mike Papantonio: Well, this is their opportunity to continue trashing our natural resources, obliterate our rivers, just do whatever they want to with the air and we’re going to see it firsthand. But trust me, I do this for a living. I follow these corporations and take them to court for a living. You watch in your neighborhood, if you’re close to any of these plants, you’re going to see a real difference in what’s coming out of those smokestacks and what’s in the water. And just in the, in the next few weeks, you’re going to start seeing a real difference to this. Brigida thanks for joining me. Okay. This, to me, this story gets, you know, there’s not, I wish we had more time to talk about it so we can go back historically and show viewers what historically has happened when EPA has given reprieves like this. It’s a disaster. Thank you for joining me.