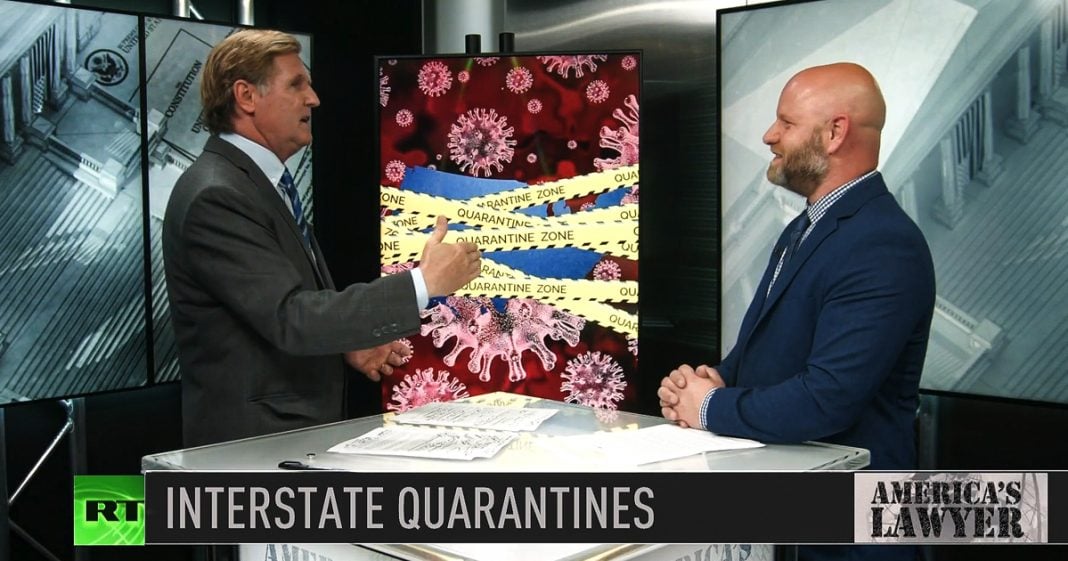 Via America’s Lawyer: Municipalities across the U.S. are now enforcing quarantines to keep restless residents of other states from fleeing across county lines. Mike Papantonio and Farron Cousins discuss.

Mike Papantonio: States are starting to implement quarantines to, to cut down on out-of-state travelers who are trying to escape quarantines in their hometown. Happened right here in Pensacola, right? Louisiana, man, they’re lined up in droves coming to Pensacola and DeSantis little too late. Right?

Farron Cousins: Right, you know, he finally said, okay, we’ll put up this checkpoint at the border. If you’re coming from Louisiana, 14 day quarantine. If you’re flying in from New York or New Jersey, 14 day quarantine and those are the kinds of things that, it seems harsh, I’m sure to some people, but we have to do this. If you want to flatten that curve, as they say, if you want to make this thing go away and prevent infections, you have to keep people from these high risk areas, from traveling all over the world. That’s how the thing spread to begin with and there’s some people out there saying, well, we’re losing our freedoms over this. No, you’re not losing anything. But if you don’t listen to this, if you try to violate these quarantines, you’re risking your life. You’re risking the life of everybody else you come in contact with.

Mike Papantonio: Okay, so here’s part of the Louisiana story. The mayor literally comes out, the mayor comes out, well nobody told me we shouldn’t do Mardi Gras. This was weeks into the, weeks into this. The federal government didn’t tell me we shouldn’t do this. So we did it anyway. So you have thousands of people infected over there. Now they’re trying to get the hell out. They’re trying to go everywhere they can. Georgia, Mississippi, Florida, Pensacola, Florida, you cross the bridge here, there’s Louisiana lined up to try to get in. And what’s so crazy is DeSantis says, well, you know what? We’re going to, we’re going to impose a quarantine. It’s going to be voluntary.

So they’re stopped, literally, these people are being stopped on interstate 10 is they come in, they’re being questioned, and then DeSantis says, well, we’re letting them go, but we’re going to follow up on their voluntary quarantine. He’s letting them fly in from New York into the airports saying, well, we’re gonna let them voluntarily quarantine. Now what are the chances of that actually happening? This guy has been behind from the, from the very start. He, DeSantis has been so behind on the beach issue. Where he left the beaches open. Now he’s letting this, this virus just come in by way of tourism because I suppose he thinks it’s good, you know, I suppose good for the economy right now.

Farron Cousins: Right, and on Sunday, you know, they issued this stay at home order for Florida and then you read more into it. You find out, oh this is only for South Florida because over the weekend it was announced you had this huge breakout of coronavirus at the villages and I’m sure a lot of people who’ve never even been to Florida know what the villages is.

Farron Cousins: That is a hot spot. It is a retirement community, it is very right wing. It is also rather wealthy. Most presidential candidates on the right always go down and they do speeches at the villages and now they’ve got a massive outbreak. So now DeSantis realizes, oh my God, that’s my base. Those are my voters. If these people get sick and die off, we’re talking about a political shift in this country that can’t be undone.

Farron Cousins: I think a lot of it has to do with inexperience. Indecisiveness is a huge thing too, because you don’t want to, if you’re on the right side of this and the right is downplaying it a little more than, you know, the left at this point. So politics do come into play. You don’t want to freak people out. You don’t want to be on the opposite side of the president when he was saying this is not a big deal. He’s changed his tune now and so DeSantis was going along with that and always remaining one step behind.

Farron Cousins: Well, and you have to be that way.

Farron Cousins: And look, it’s going to be rough. But if we do this, if we sit tight for two, three, four weeks.

Mike Papantonio: It can.

Farron Cousins: We can knock this thing out and go back to normal. But if we don’t, we’re looking at months and months of this.

Mike Papantonio: Farron, thank you for joining me. Okay.