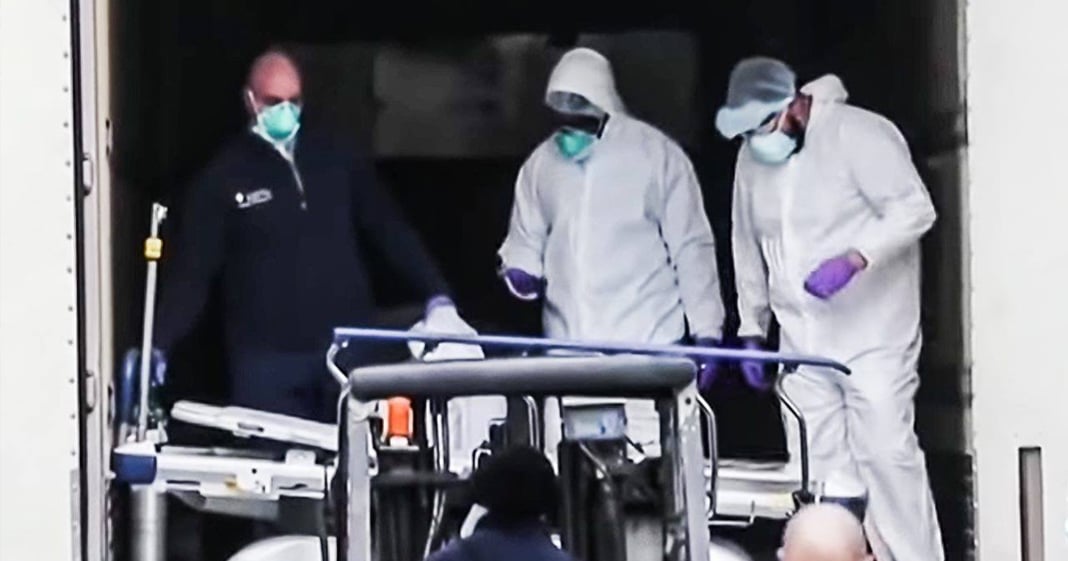 The Pentagon is getting 100,000 body bags ready in a sign that the federal government understands how severe the crisis is going to become. This move should leave everyone feeling a little uneasy, as it shows that they aren’t just preparing for a massive death toll, but they are preparing for these deaths to happen in rapid succession. Ring of Fire’s Farron Cousins discusses this.

Here’s a story that is unfortunately very disturbing and really isn’t going to leave anybody feeling good about this administration’s response to the pandemic. Yesterday, it was reported that FEMA has ordered 100,000 body bags because they’re afraid they’re going to run out of the stock that they already have. So FEMA and the Pentagon working together to make sure they have enough body bags on hand to deal with the massive amount of deaths that they fear now are almost a certainty. 100,000 new body bags, or as they call them, human remains pouches. That’s the official term the Pentagon uses to describe these things. Human remains packages. But here’s the thing, folks. Yes, Donald Trump has now admitted that we could be looking at, you know, 100,000 people on the good side of this, maybe 150, maybe 200,000 people die in this country. And he thinks that that’s okay, that he thinks that means we’re totally doing well with this.

But you don’t need that many body bags. You don’t need the military to stockpile body bags unless you’re planning on a lot of deaths, deaths very quickly. Think about that for a second. If these were just, you know, deaths by counties, you know, person dies, person dies, person dies, the morgues can handle that. They’re expecting the morgues to not be able to handle this. That’s why they’re doing this, which means a lot of people are going to die and a lot of people are going to die in rapid succession. That’s what’s so terrifying about this in addition to obviously just the sheer number of people, but they’re not expecting this to necessarily just drag on for months and months. They expect these deaths to just happen soon and suddenly and most likely repeatedly. Because they don’t think they even have enough to handle what’s about to come down the pipeline folks. I’m telling you this one, because it’s news and that’s what we do.

We talk to you about the news of the day, but two, because people have to start taking this thing seriously. The last thing you want to see is one of your family members, one of your friends ending up in one of these human remains packages. We have to start taking care of ourselves. We have to take these warnings to stay at home to social distance. We have to take those seriously. We absolutely have to do what’s necessary to protect ourselves, our friends, our families, our neighbors, our coworkers. Because if not, well, let’s just put it this way. The government’s already planning on you not taking this seriously and they’ve got a bag ready for you.