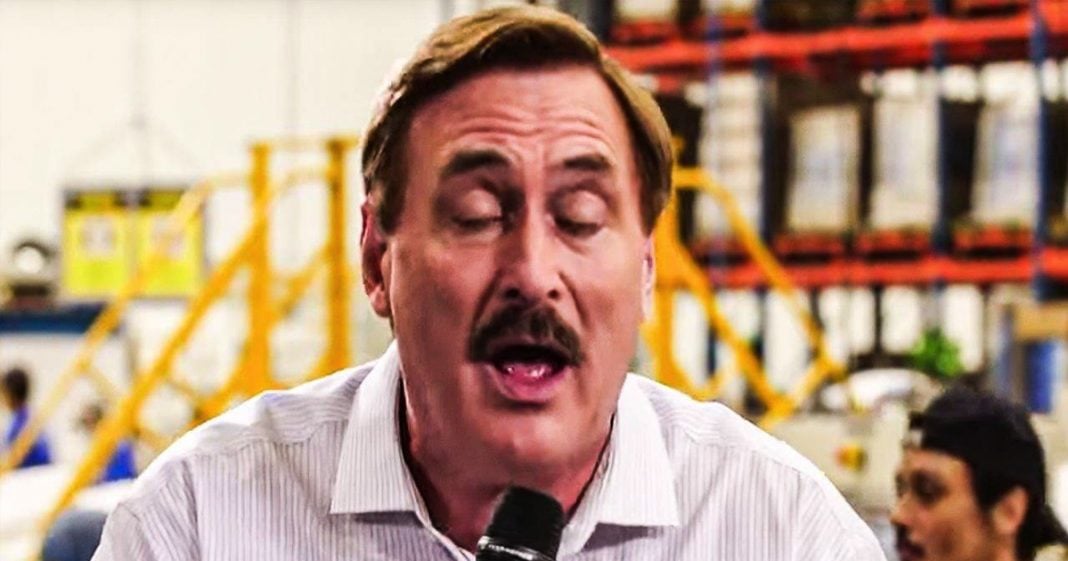 Mike Lindell, the CEO of MyPillow, has finally gone from just being a corporate Trump-supporter to a conspiracy theory-pushing troll. In the days following his appearance with Trump during the Coronavirus press briefing, Lindell has retweeted a QAnon conspiracy theory about his own company and claimed on a Christian radio show that the devil is trying to hack his website. Ring of Fire’s Farron Cousins discusses this.

So Mike Lindell, the CEO of MyPillow is having, I guess you would call it a crazy week, right? Monday, he gets to go and appear at the white house coronavirus press briefing and tell us all that God gave us Donald Trump to somehow save us, even though we’re, we’re dying in droves. Just a thousand people just yesterday because of his horrible response to the pandemic. But that was not the craziest thing that happened with Mike Lindell this week. It was also revealed through his own Twitter feed that he retweeted a QAnon conspiracy account after this account seemed to link Mike Lindell and MyPillow to QAnon. What had happened was that they discovered when you’re checking out on the MyPillow website and you just type in the letter Q in the promo code, you get a discount. So they thought that this was a wink and a nod to QAnon. So they tweeted this out and then Mike Lindell actually retweeted this, so he’s now lumped himself in with these wackos.

But as reporters have pointed out, there’s several other single letters that you can actually just type into the promo code and still get a discount on your MyPillows. The letter W works. Does that mean they’re, you know, hand in hand with the former Bush administration. The letter K works? Does that mean they’re, you know, part of that other group that has a bunch of Ks in its title? Probably not. These are probably just either codes that have been put in to check codes or codes given to employees, families, friends, whatever. It Happens with a lot of places when you shop online. They do create specialized codes for certain groups of people that are typically not publicized. You play around long enough on these websites, you’re bound to stumble across one of them. For MyPillow, the letter Q happened to be one of them. But again, that’s not even the craziest thing that happened with Mike Lindell this week. Retweeting QAnon wasn’t the craziest thing. The craziest thing happened on Tuesday, the day after his press briefing with the president where he went on a Christian radio show and said the following.

He said, my website, we’ve never had this happen. It keeps breaking. Things keep happening and it’s just, I just think it’s the devil. I mean, it’s evil attacking MyPillow because it knows we’re winning. We’re winning, we’re bringing God back to the country. I thought you were bringing pillows back to the country. I mean, that, that is your business, right? You, you sell pillows to people, you sell mattress toppers, you’re not selling God. There’s, there’s not a little bit of God in every pillow that you make, Mike, this is a very odd claim, but not as odd as you saying that the devil himself is attacking your website. I don’t remember seeing anything about that in the old Testament, the new Testament or any of my religious studies that I had while growing up. It never mentioned the devil being a damn good hacker, but hey, times evolve, right? I’m sure the devil is evolved too. He’s down there on his Macbook trying to get into the MyPillow website and make things a little more difficult for people.

Let’s also not forget them, Mike Lindell is the guy who’s had several legal problems over the years, not including his younger years before MyPillow, but, you know, for false advertising and things like that, because that special deal that MyPillow’s offer was actually just the regular price of the pillow and he got popped for that pretty hard. But here’s the thing. Donald Trump loves this guy and this guy loves Donald Trump. Donald Trump let him speak at a coronavirus press briefing and if Donald Trump is desperate to find a right wing CEO, is this truly the best he can find? Because there are right wing CEOs all over this country. I mean, I would think Donald Trump could make a call to wall street and find one willing to come out there and talk with him and if not, he could have his friends on K street start making some phone calls. So why Mike Lindell? Why MyPillow? Well, it’s actually a very obvious answer, folks. Mike Lindell does have this little, you know, folksy kind of personality.

Homegrown guy pulled himself up from his bootstraps. Overcame hardships in his own life and founded what has become a very successful company and Donald Trump thinks that that resonates with the American public. And if all you ever saw from Mike Lindell was his obnoxiously loud commercials, you might think the same thing. It’s just the folksy guy selling me a pillow, Hey, great. But then he gets up on stage and he speaks and we have seen him speak at the white house press briefing. We’ve seen him do interviews on Fox news. We’ve seen him do speeches at conservative events. This guy is a train wreck. He absolutely is incapable of public speaking, and there’s nothing wrong with that. Most people are like that. It is terrifying. But buddy, if you want to find a folksy CEO who also happens to be a right winger, I’m sure you can also find one who fits those criteria and is capable of stringing coherent sentences together when speaking to the public without devolving into crazy conspiracy theories or claims that the devil is trying to hack into his website.