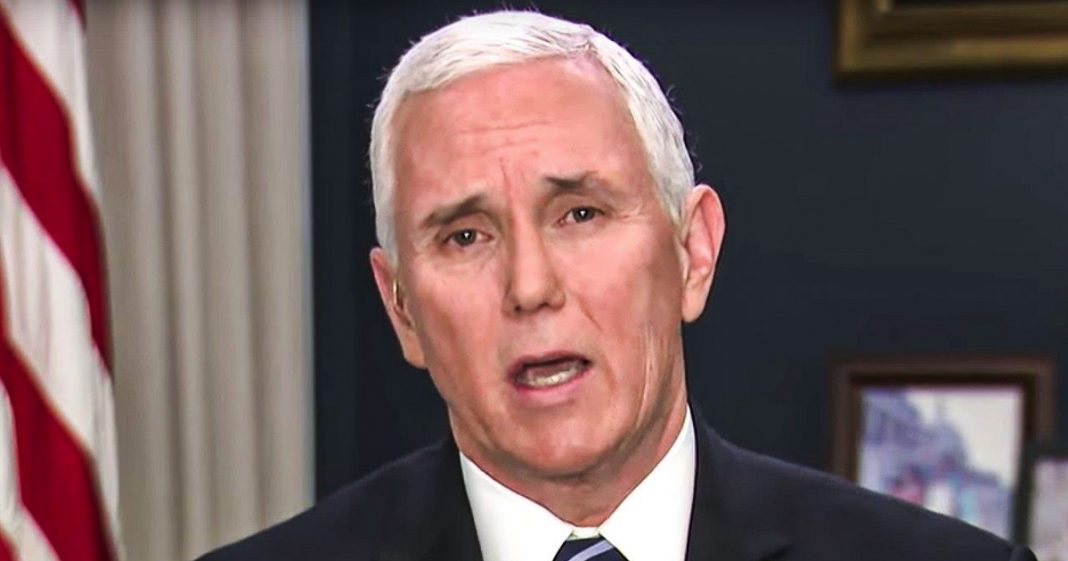 Donald Trump isn’t the only top member of this administration willing to lie to the American public; Vice President Mike Pence is getting in on the action, too. On Wednesday, Pence said that Trump has NEVER belittled the virus or the pandemic, and that he has always taken this thing seriously from day one. There is plenty of video evidence that says otherwise, and all Pence has to do is be honest about one thing and he can’t even do it. Ring of Fire’s Farron Cousins discusses this.

Now we know that Donald Trump has been lying to us since day one about the coronavirus and the pandemic, right? He’s lied to us about the severity of it. He’s lied to us about what other people are saying, saying they’re the liars, not him. But apparently vice president Mike Pence wanted in on this action a little bit. So this week he spoke with CNNs Wolf Blitzer where he told Wolf Blitzer quote, I don’t believe the president has ever belittled the threat of the coronavirus. It was after Wolf asked, you know, about the months of Donald Trump belittling the coronavirus. Should, should we take him seriously on this? I mean, you know, he told us for so long that this wasn’t a big deal and Mike Pence is like, ah, he never said any of that Wolf.

Except he did and thanks to the Intelligencer at the New York magazine, we actually have a handy little list of some of the times, not even all of the times, just some of the times that Donald Trump belittled the virus. On January 30th he said, we have it very well under control. We have very little problem in this country at this moment, five and those people are all recuperating successfully. On February 19th he said, I think the numbers are going to get progressively better as we go along. On February 23rd he said we had 12 at one point and now they’ve gotten much better. Many of them are fully recovered. Then on March 4th, he said, now and this is just my hunch and but based on a lot of conversations with a lot of people that do this because a lot of people will have this and it’s very mild.

They’ll get better very rapidly. They don’t even see a doctor. They don’t even call a doctor. You here, you never hear about those people. He also on Twitter compared it to a very mild flu and this was after we knew at this point that no, this is not a very mild flu. On March 24th, 24th, he said, we’ve never closed down the country for the flu. So say to yourself, what is this all about? He also went on Sean Hannity’s program as we had discussed on here and downplayed the whole thing. He went on Fox news and claimed that this was some kind of democratic hoax. You know, said that the WHO, the world health organization was lying about the mortality rate and the number of deaths we’ve seen from this. He said they were lying. So no, I’m sorry, Mr vice president.

But you’re lying to the American public and as a good Christian boy, I would have to imagine that that’s probably eating you up inside, isn’t it? Or are you not actually a real Christian? Because I seem to remember those commandments, right? Thou shalt not bear false witness. And to translate that from by bible’s is don’t f’n lie. But you just can’t stop yourself can you, Mike? You want the power. You want to be a part of this administration and you’re willing to prove to us all that you’re just another phony right-wing Christian in order to maintain your position of power here. There is nothing Christian at all about you, Mike Pence. You are in every way just as evil, deceitful and stupid as Donald Trump himself.