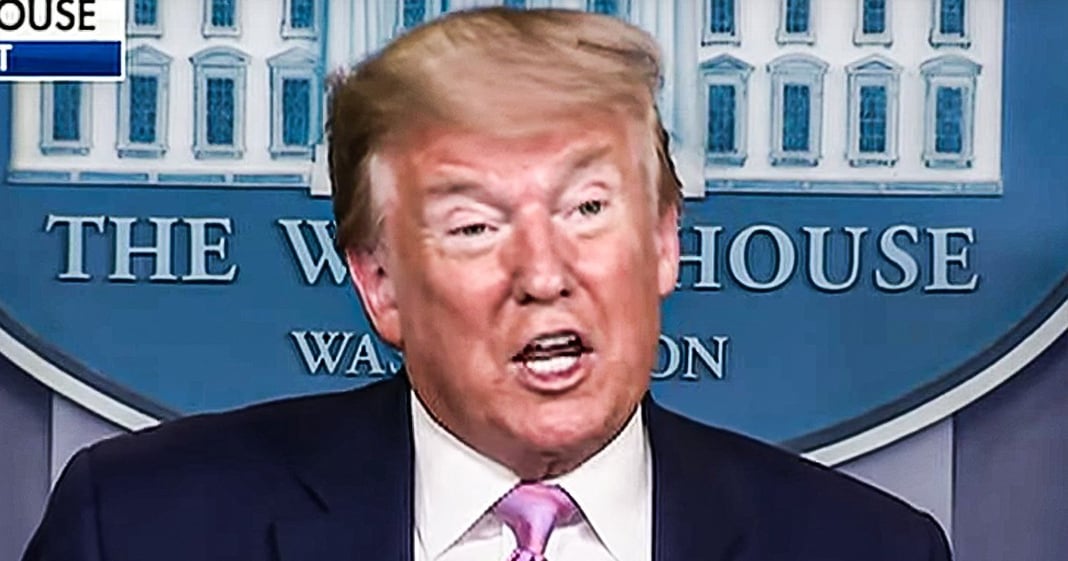 Donald Trump says that people who don’t have masks don’t really have to worry because they can just use scarves to cover their mouths. In fact, Trump says this is probably even safer than a mask! The Center for Disease Control says otherwise, and they were forced to come out and correct Trump’s claims. Trump is trying desperately to convince people that everything is ok, but things are still getting worse. Ring of Fire’s Farron Cousins discusses this.

Donald Trump is once again giving the country horrible medical advice and yesterday in his press conference he actually came out and told people that if you don’t have a mask, sometimes a scarf can work just as well. In fact, sometimes a scarf over your mouth can actually work better than medical grade face masks. Here’s the exact quote from Donald Trump. It doesn’t have to be a mask. It can be a scarf. What I do see people doing here is using scarves and I think in a certain way, depending on the fabric, I think in a certain way a scarf is better. It’s actually better. Those were the exact words from the president of the United States telling people that, hey, if you can’t get a mass, just wrap a piece of fabric around your face and you’re good to go. And if it’s a good fabric, which he didn’t tell us what good fabrics are.

So I guess we’re on our own to figure that out. You’re actually in better shape than doctors. Now the centers for disease control seems to disagree with the president and they have basically had to re up their website where it says that this should only be done as a last resort for medical professionals. It is not, because there is no evidence to suggest otherwise, going to actually stop you from getting infected with the virus. So once again, Donald Trump’s own government has to come out and say, yeah, what this guy just told you is not true. What this guy just told you is dangerous and what this guy just told you could end up getting people killed. This is not the first time they’ve had to come out and correct him. The FDA had to do it when he was touting that bogus cure for the disease that’s now getting people killed.

And it’s not going to be the last time that they have to do it either. But there is a reason why Donald Trump is out there telling people, just wrap your face in a scarf and that’s because he knows that we are suffering from a very serious shortage of medical supplies. Masks are number one on that list. He knows that his government, his administration, his policies, sent a bunch of them over to China because he was trying to grease the wheels for his trade deals with them. And so the shortage in many ways does fall back onto his administration. So he’s trying to downplay it. He’s trying to just tell us, wrap a scarf around your face and you’re good to go doctors. You have nothing to worry about. A virus can’t get through fabric. That’s just crazy talk. And according to the CDC, yes, that is 100% crazy talk coming from the president of the United States.

But again, he’s trying to make up for his shortcomings and in doing so is putting more Americans at risk. I have said this repeatedly and apparently, I’m going to have to continue to say it repeatedly, but please, for the love of God, do listen to medical advice from someone who does not have a medical degree. Even if they happen to be the president of the United States, that doesn’t mean that they necessarily know what they’re talking about. And as we have seen from Donald Trump for the last few months regarding this pandemic, he has no clue what he is saying. None of the advice he has given is sound. Most of it’s not based in medical science whatsoever. So how about we listen to the doctors instead? If this is your absolute only option, fantastic. You can do that. But do not under any circumstances think that it makes you immune from the virus or that it is in any way more effective than a medical grade face mask.