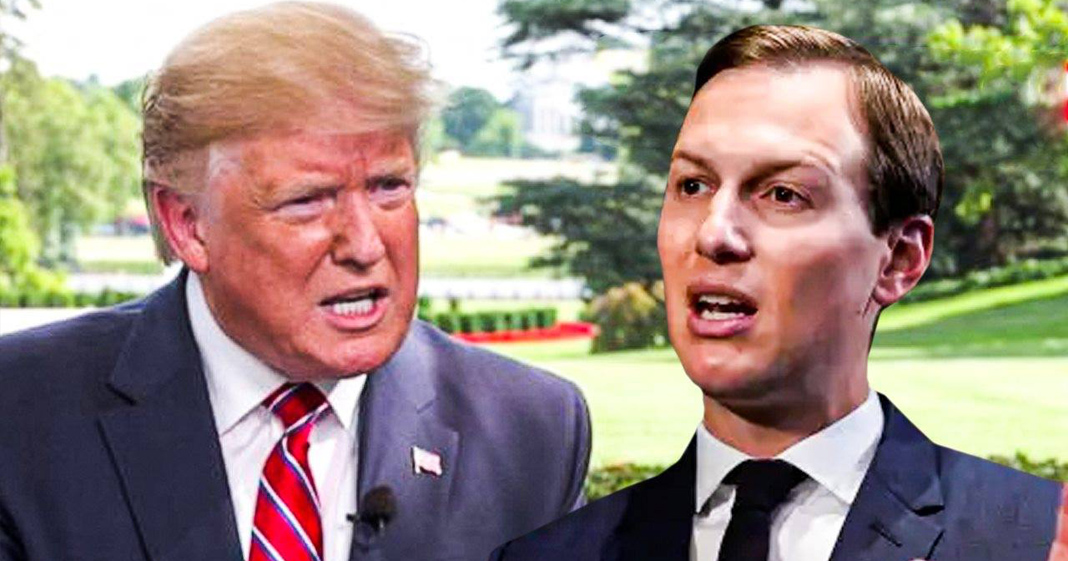 In the early weeks of March, Donald Trump promised that his administration would be building a Coronavirus website and that Google was going to help them make it. Google’s help never materialized because Trump passed the job onto a firm owned by Jared Kushner. These people are lying to us at every possible turn and lining their pockets when they think no one is looking. Ring of Fire’s Farron Cousins explains what’s happening.

A little over two weeks ago, on March 13th Donald Trump proudly proclaimed that the white house was going to be building a website that was going to allow people to type in their symptoms, see if they matched covid-19 and then it was going to direct them to the nearest testing facility. Now this would have been a great tool to have and Donald Trump also told us on that March 13th briefing that Google, obviously one of the most trusted names in the internet was going to be building this site with the white house and he said that to calm fears. Again, Google is one of the most trusted in terms of reliability firms working online today. Everybody knows Google and a lot of people trust Google. Again, in terms of reliability, not national, necessarily in security. But, anyway, he promised us Google would do this. The public breathed a heavy sigh of relief and we all moved on.

And then Donald Trump definitely did not reach out to Google to build this website and instead his administration reached out to a firm called Oscar health. Now, you may remember from previous segments on here that Oscar health is run by a man by the name of Joshua Kushner who co-found, co-founded Oscar health with investments from his brother Jared Kushner, who you may also remember is running a shadow coronavirus task force within the white house. So Oscar health, instead of Google made this website incorporated all of the elements that Donald Trump had promised were going to be incorporated in this. They designed it so that it looked like it was coming from the department of health and human services and then it suddenly disappeared. So this story took another very weird turn. The website that they had created just poof gone after it had been running for a couple of days.

And again, folks, all of this had happened within the last like 18 or 19 days. But one thing is for certain, Donald Trump lied to the public about Google doing this. He lied to us about their involvement because all the man knows how to do is lie. Same thing with Jared Kushner. I take that back. They also know how to do a second thing apparently, and that is how to line their own pockets. Jared Kushner now finds himself in even more potential legal trouble as it would be illegal to direct this project to a company owned by him or a member of his family. Even if they offered it for free, which is what Oscar health claims they did. They didn’t charge the white house a thing. Well guess what? Shockingly, that’s also not legal. A firm cannot provide this product for free to the white house unless there was specific specifications in a declaration of national emergency, which yes, there was a national emergency, but no, that was not specifically outlined in it. So now Kushner wanting to help his brother out, you know, wanting to get them a little more notoriety in the healthcare industry has now roped himself into another legal issue because that would be the third thing Jared Kushner knows how to do and that is to screw himself over in the eyes of the law.

This is not going to end well folks and I’m not just saying for Jared Kushner. Nothing’s going to happen to Kushner. Right? Either Kushner for that matter. We know that. These slippery little weasels manage to get out of everything. What I’m saying when I say this isn’t gonna end well is, I mean, for the rest of us, the public, right? Donald Trump has no idea what he’s doing. He’s lying to us everyday about what’s actually happening and what he wants to do, and instead he is putting brain dead servants like Jared Kushner in charge of this response, in charge of the website that we’re supposed to have as a useful tool for us. We’re in trouble. But again, that’s what happens when you put a grossly incompetent and inexperienced person in the white house.